I keep getting a weird error and I don’t know why. It doesn’t particularly matter - I can work around it, but it’s the principle of the thing!

In my WIP, it’s possible for the player to have a pet. The details of this pet are recorded so I don’t have to type every aspect of the pet’s variations each time eg:

There’s a point where the player has a conversation where they reference the pet, but to make sure it still makes sense for players without a pet, I created a short check that subs in one of the player character’s friends’ names instead, assigning his name and characteristics for the duration of the conversation, and then another check later that returns the status of the pet to blank so it doesn’t throw up any weird stuff down the line.

All works fine, except in one place.

This line of the conversation:
“$!{pet_pronoun_he_she} ended up covered in cake mix,” she finished lamely.

Prints as:
" ended up covered in cake mix," she finished lamely.

I thought it might be because there’s a page break (although that’s never caused problems anywhere else) so I added in another check that sets the details again after the break just to see. Same thing happens.

EDIT: Am retesting and now this variable seems to have stopped working everywhere. Not sure what the heck I’ve done!

Hmm not sure what you have done but I would reset like you had it, from my experience I would hazard a guess is your setting the var “” some how. To clarify can you post the code so we have a better idea.

Edit I would approach it a little different myself, there is no right or wrong but always better ways of doing it and I am sure it can be do better then my example but I like to set mine up once that way I do not worry about changing back and fort durning the game.

Yep, will go back to an earlier version.

This is the bit where it sets everything: 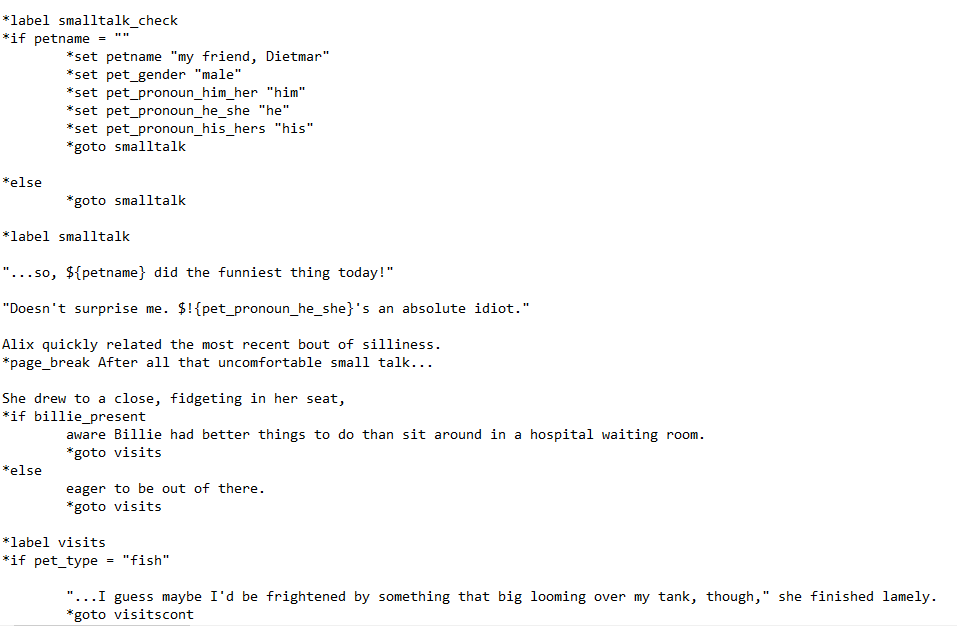 It was working fine on that bit, displaying like this: 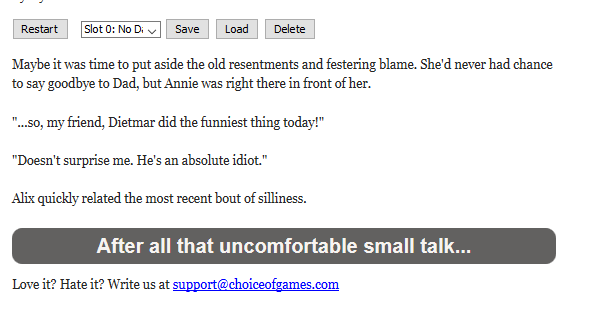 But then the next bit doesn’t work:

Sorry on a phone so not able to see it all clearly but I am sure that other will help you. It is often better to copy paste your code as many or on phones and is simpler to veiw as text then images.

When you created pet_pronoun_he_she in your startup file, I assume it’s:

If so, odds are good that what’s happening is you’re finding a path through the story where that ends up never getting *set as anything else, so stays a blank. (Or else, like Old Guard said, you might be setting it blank somewhere, but that seems less likely).

This is likely obvious to you already, but with the code you’ve posted, a story path that doesn’t have a blank “” pet name at small talk check will skip the pet pronoun *set there; and a pet named anything but “my friend, Dietmar” will skip it after *label visits.

Without seeing all your code it’s hard to pin down the exact point where it goes wrong… but I’d put good odds that when you run carefully through the code path, you’ll find that thanks to some condition or other you’re never actually setting the pronoun to be anything other than the “” it was created to be.

If that’s completely wrong, all I can offer is a more thorough diagnostic if you’re willing to share the actual scenes.

Yeah, I think you’re right - I’m going to go back to an earlier version & check, but all I can think is I’ve accidentally deleted a crucial line where it sets the variable, as I’m sure it was working previously. However, what I don’t get is how in the version I’ve posted where I’m forcing it to set to “he” after I know it’s already set to “my friend, Dietmar” it still comes up blank the next time pet_pronoun is used. (I just did that bit as an extra test - it wasn’t like that originally.)

Okay, so, I’ve narrowed it down to being an issue somehow related to the smPlugin. If I comment out the save stuff, everything works fine, but when I have it running, the saving works fine, but certain conditional choices and variables no longer appear correctly.

I’m guessing it’s either that I’ve inadvertantly downloaded an old version of the plugin (I had a good scroll about through this thread: ChoiceScript Saving Plugin (Update: Sept. 2019), but couldn’t be sure.)

OR I’ve set up the plugin slightly wrong somehow, either in terms of the .sj stuff in index.html, or the position of the *sm_init command. 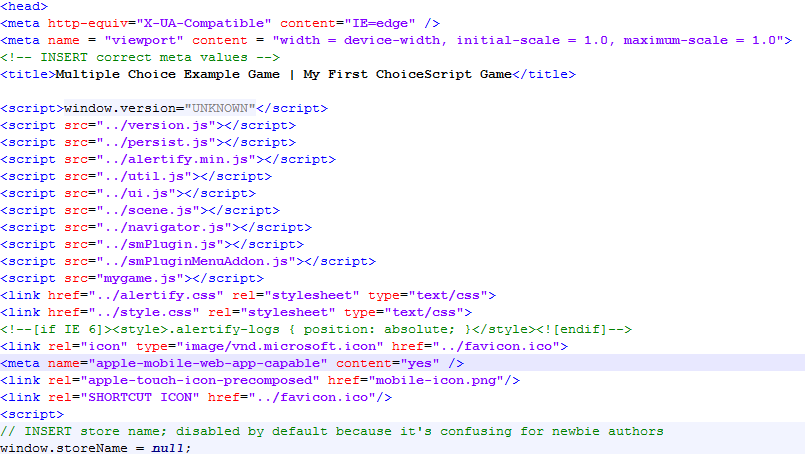 Aha. Then I will be useless.

I only speak vanilla ChoiceScript, and neither use nor understand smPlugin.

Hi there, I’m the author of smPlugin. Sorry to hear you’re having trouble with it. To implement the necessary behaviour the plugin does have to overwrite some core CS stuff, so it is plausible that it’s causing issues here, particularly if certain elements of cs have been updated recently.

Do you think you could pm me a link to download a .zip of your mygame folder? I’d be happy to look into this for you

Thank you so much, that’s very kind! Will send the link shortly. (It’s most likely me doing something stupid. I’m new to all this stuff!)