Tropes and stories you hate

I guess it’s their equivalent of electric power mcguffin… or maybe it’s an allegory for nuclear energy, I don’t know I’m neither Japanese or otaku.

There’s a crystalline Chernobyl every other week in JRPG Land

Guess I can’t really argue with that one, they do tend to be on the retina-searing end of the brightness scale.

I think the best explanation for it is: crystals are pretty.
I remember when I was a little girl and I was going apeshit over anything sparkly

In fairness, I’m pretty sure they don’t CHOOSE for the world to depend on crystals to function. It’s just like that.

That’s just what Big Crystal wants you to believe.

I think the best explanation for it is: crystals are pretty.

Besides, what else is crystallised magic supposed to look like?

More seriously, crystals have been seen as magical for millennia, with accounts going back to the Sumerians and Ancient Egyptians. (Heck, the word amethyst comes from the Ancient Greek for “not drunk” as it was believed to cure hangovers.) It’s not just something that SquareSoft made up for Final Fantasy; it’s got a long mythological history behind it. And if you’re writing a story where there are a number of magical objects that can be broken one by one to raise the stakes and you’re writing in a setting where all myths and legends are real to an extent (definitely not talking about anything specific here, no), then having a set of crystals (say, corresponding to the four classical elements) is something that makes a lot of sense.

Simple reason, they’re shiny and pretty and a good shorthand for MacGuffin-ness. They’re also popular in cartoons on both sides of the Pacific (She-Ra and the Princesses of Power, Steven Universe, My Little Pony, Sailor Moon) for this reason. For cartoons, they also make easy merch.

I don’t know why, but I’ve come to hate the trope of a big intimidating guy have a squeaky pre-pubescent voice. I think a better version of this trope is the big dude that speaks all sophisticated and quotes poets and philosophers (basically Keith Lee or Beast).

I get it. The protagonist needs something to harden themselves up, push the plot forward and grow but dang does it really have to start with our home village turning into a PTSD ridden warzone?

For once it’d be nice if a journey started out of fun yet had it’s own share of creative hardships, instead of burning sad family I’m now angry must fight inner and outer demons everyday rah.

Yeah no for me I do not like slice of life, it has nothing to do with genre just my personal taste. Like if a story does not have a strong driving force of a goal which is interesting then I’m gonna be bored. I also don’t like court intrigue (I think that’s how it’s spelt) and dealing aristocracy, politics, romance and all that stuff. Like it’s great if they are there otherwise I wouldn’t be able to enjoy a lot of ifs but I’m a simple guy just give me a stick and I will wack whoever needs to be wacked to high heaven and back

For once it’d be nice if a journey started out of fun yet had it’s own share of creative hardships,

This is exactly why we need more games like Tally Ho and Jolly Good: Cakes and Ale. Plenty of creative hardships here, with a distinct focus on the (hilariously) “creative”.

I’ve just seen a news where they talked about a movie (didn’t catch the name, sorry) wich use cannibalism as an allegory for diversity and outcast.
(Sarcasm)Who else think that Is it a really wonderful idea?

I don’t even know how the connection could be made. 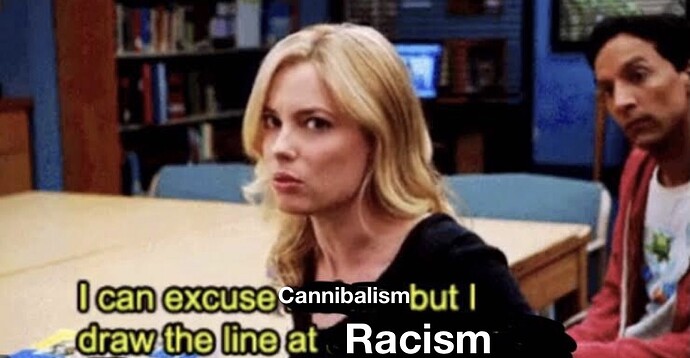 I’ve been kinda ambivalent towards games like Spec Ops: The Line or MGS2 where the whole thing is a “deconstruction” of shooter games or “power fantasy”. They always try to make you try and feel like garbage for enjoying the genre.

And honestly, while those games have genuinely good writing, a lot of their criticisms are really dumb. Spec Ops’s devs removed the option you’d have at some point to actually leave the game instead of staying and causing more trouble, because players kept taking it and nobody was sticking around to hear about how they were horrible people for trying to be heroes and causing more problems. Like, I guess they expected shooter fans to be as delusional as Walker?

Especially dumb was the white phosphorous scene. “There’s ALWAYS a choice!” Well then why are you making me do it? I could take these guys easily if you didn’t beef them up so much, so I’d have to use the stuff. Don’t tell me there’s always a choice and then not provide said choices.

Whole thing feels like they’re bashing you for wanting to play their games. I didn’t pay sixty bucks to be insulted.

Well, cannibalism is often extremely homoerotic (fellas is it gay to want another man’s meat inside of you?) and it’s used as a metaphor for queerness in a lot of media (NBC’s Hannibal, AMC’s The Terror, Antonia Bird’s Ravenous, Jennifer’s Body, basically all good vampire media, honestly).

I think any kind of monstrousness in fiction being associated (metaphorically or explicitly) with queerness can make people — very understandably — uncomfortable, though it’s always appealed to me from the perspective of reclaiming society’s disgust and hatred and embracing the otherness rather than trying to assimilate to its expectations. But of course, YMMV.

I HAVE seen this. Seen flame wars about it too. Not really my thing, at least when it comes to FIGURATIVE monstrousness. I prefer going against these preconceptions, not much of a reclaimer when it comes to this thing. And Ace guy who is a cold, unfeeling sociopath for example, isn’t something I’d feel like reclaiming. That’s just me though. We’ve all got our own thing.

Oof yeah it’s a super individual preference for sure.

And Ace guy who is a cold, unfeeling sociopath for example, isn’t something I’d feel like reclaiming.

I really feel you there — I’m not ace but I am autistic and I’ve had quite a few conversations with an ace friend about how often there’s overlap in negative stereotypes for both groups. And yeah, I also have little interest in reclaiming that kind of character.

I’m actually both. So it’s double.