I’m quite excited to see where this project goes. I’d say this has massive potential, so far it’s getting performed correctly for a rough draft. Though, I’m aware this project got wiped and restarted, when did this restart occur?
Anyhow, I’ll be tuned for awhile. Hmu if you need a crash pair of eyes or something.
Good writing.

, I wasn’t aware that the project got restarted, I’m really looking forward to further explore my romance with Raven

I’m right at the RO choice scene and there is only one option. Seems it’s tied to an earlier time-based selection? I guess that means I only selected one back then before running out of time (or possibly just opting not to do anything else with my time)? I don’t actually remember what I did back then.

IIRC, you can visit two rooms during the party, and then you have to pick one of the two? I think? It’s been a while.

I must have only visited one room. I’m just not sure what else I did to pass the time. I did skim through the code, but the way it’s laid out, each option there is a pretty long segment so it’s hard to figure out which choices apply to which scene.

I actually started playing quite a while ago but never finished, and a mention of the game elsewhere reminded me that it had been a while since I played it. (I definitely have a habit of leaving games unfinished and then not remembering where I left off when I come back to them. It’s not just this game.)

You can visit three of the ROs rooms at max after the first big dinner scene, and the ones you decide to pick are then unlocked during the first date choice and RO lock selection.

I have it set up this way because I believe it’s more digestible to narrow down the lock in choice rather than throw all 9 at you. Also most of the dates are invitations given to the MC by the RO, so I felt it would be a bit weird to have the circumstance where 9 people are suddenly inviting the MC out to do things on a particular day haha

What else can be done to pass time? It looks like it’s just visiting rooms or choosing to go to bed?

I think it was just unclear to me that that choice is important for deciding ROs. Because I definitely remember wanting to check on V because he seemed upset, but I saw no reason to check on anyone else.

EDIT: Maybe I’m not clear on what the relationship between the MC and V is. V at least seems to think I’m his commanding officer (though I’m definitely not sure why he thinks that or if it’s actually true or not). So I’ve been thinking we do have an established relationship already, but it’s a professional one. Am I misinterpreting?

EDIT again: Oh. Ok. So I reread part of the first chapter in the code, to find what text I missed by not selecting certain choices, and discovered that the main reason I was so confused is that, having selected a military background, basically everything I read was military themed. Military themes come up even if you don’t select a military background, but with the background, it’s everywhere. This led me to think Triaina as well was a military academy and that we were all soldiers, not just V and myself. It didn’t make sense to me to be attempting to go on dates while prepping for war, so absolutely no part of the game was preparing me for romance just yet.

Has there been any updates since the new year began by chance?

There was it includes;

…Am I so oblivious that my MC went on a date already without me realizing it? 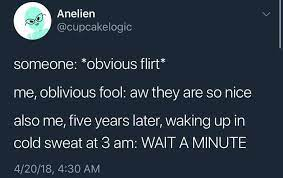 I’ll check in in 2027 then and see if I know who I dated earlier in the game.

I mean, if it’s a 2nd date with the same person then it’s definitely V, but it doesn’t necessarily need to be the same person since the RO choices are apparently decided by whose dorms you decide to visit. Which is… definitely not a date.

EDIT:
Me seeing the option to call training with V a date: “haha this is obviously a joke but my MC is not a jokester so I won’t select that one”
Me reading the actual game code: “uh no geldar actually it is a date, you and V are just equally oblivious”

anybody who romanced P and went with the bookish route can tell me if im going to get absolutely nae nae’d if i offer to fight instead of rex? or does the stats/background dont matter and im just absolutely going to get nae nae’d anyways? or is fighting together a better option?

You are being too accurate

I do hope we get to see the protagonist’s father soon, there’s a lot to explain. Especially to someone like Storm Sr.

Hey dad, i just found out i have space radiation in my blood, also there’s an obsessive stalker girl following me everywhere and we’re getting married

i have multiple times