Throne of Blood (chapter 3 is up!) 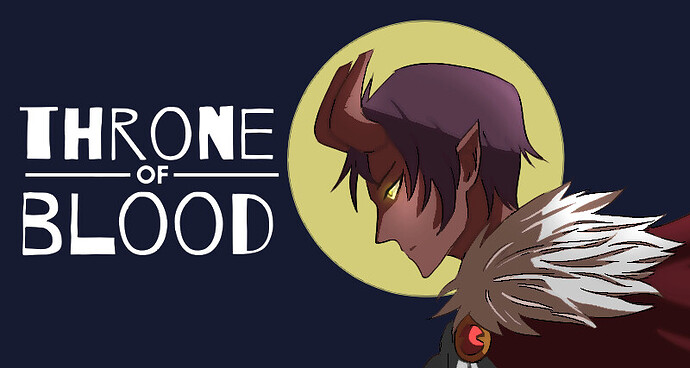 You are royalty living in the unforgiving demon realm. Even though you are the third child in line to inherit the throne, your half-angel ancestry is met with disdain by your kin.

When the current Emperor dies, the fight for the throne begins. All three children must kill each other until only one is left. How will you, the clear underdog, snatch the crown from your brothers?

Word count: ~60,000 without code.
Note: In prologue + chapter 1 you play as a weak-willed MC who will break out of their shell starting from the end of chapter 1.
All art drawn by me.

Follow the tumblr! Tumblr -
Support me on Ko-fi! Ko-fi

This is my very first time doing a CYOA game. Very nervous about it! Please let me know your feedback! Any grammatical error spotting and inconsistencies, feel free to point them out.

I hope you enjoy this ^^

FYI. This game was actually a reverse harem story I planned with male-dominated ROs, so I do apologise for the lack of customizability on some of the characters! I’ll try to add more females if it permits but since this is my first game, I’d like to eliminate as many variables as possible so I don’t get overwhelmed.

I’m curious, is there some Little Nicky influence here?

Never heard of that actually!

Gotcha. They’re not super similar but there’s a couple aspects I noticed that made wonder. Looks like a cool concept and it’s well written

Huh, strange. It seems to work fine to me. If you go to Dashingdon front page, it should be there! DashingDon: Free ChoiceScript Game Hosting

Never heard of that actually! Had to google it

Finally a thread for this, I’ve been waiting since I read the demo on Dashingdon. Looking forward to read more!

Looks interesting what races are there in your world

He is fiery, explosive and crass.

I want that one, please

I’m in love with your WIP. I played a pessimistic MC who was all “I am weak can’t do nothing right”, who just gets enough of her brother’s shit in the library and was so funny lashing on the motherfucker

I will protect my precious knights

but not gonna lie, Zero already have me. I got a thing for redheads, I always play the their routes first in otome games.

I found a pronoum error here (should be “her”)

I am so curious to see your characters drawings

Thanks! You’ll definitely find more about the world but currently there’s:

The following goes under the beastkin category

Cheers! I’ll fix that! I thought I got them all but apparently not haha

OMGG I FEEL YOU!! Zero is highkey inspired by Benimaru from Slime and Ignis from Cafe Enchante ;-;

Good to know you’re enjoying it!! I love playing as the meek characters too always

NOW I LOVE ZERO EVEN MORE. I absolutely adore Ignis and all the angst of his route. I didn’t finished Cafe Enchante yet, because this game is HEAVY. I only played Ignis and Canus and then took some time to recover

it hurts so much

AAAA I’m still in the middle of Canus’ route but Ignis was the second one!!! Gotta feed on the angst, you’re only selling his route more!!!

And since we’re in the topic of otome, Cyrus is TOTALLY inspired by Crius Castlerock from Even if Tempest nudge nudge

Oooh she looks amazing!
Haha! Time for that power trip fantasy then!

Gotta feed on the angst, you’re only selling his route more!!!

Hehe his route isn’t as angsty as Ignis, though. The game is overall very angsty and sometimes I need a pause. To be honest, I don’t think there is a angstier route than Ignis. Not after … You know.

And since we’re in the topic of otome, Cyrus is TOTALLY inspired by Crius Castlerock from Even if Tempest nudge nudge

I haven’t play Even If Tempest yet, but it’s in my wishlist, I’m waiting a sale

Can Zero be gender selectable as well?

Not at this point, maybe in the future ^^

They really are bloody expensive, got it for full price but honestly I enjoyed it so much so I wasn’t even mad hahahsdjjkfld

Hope so, be cool to have all women like you can have all men.

Love it so far! A very cool and original take on the ‘battle for the throne’ tale. There are a few pronoun coding issues here and there (my princess was called ‘he’ numerous times) and a couple of typos, but your writing is engaging!

Can’t wait for an update!

Started reading this in dashingdon before the thread was created, it’s really good. Is enchantment the only stat that has the potential to make PC be able to fight without relying on others?