Because I think your answer would be something along the lines of “burn them all with fire”, and that thing hasn’t been selling a gazillion fucking books for as long as I’ve been alive because women don’t like it.

You nailed it. Burn them with fire.

I went through a spell when I was like 17-20 where I tore through similar books (not Harlequin, but some other branded version). After the first 10 or so (I read fast), I kept reading them to see if any could actually satisfy me. They did not. I never found a single one of those books that did anything for me. Too corny for my tastes. And the dialog made me cringe.

What’s bland for one is fun for another…

Exactly. I just didn’t think anything triggered that romantic response in M. The cheek kiss, though, proves otherwise. Even if that’s the only proof we have thus far that M’s romance will actually have some romance in it.

Why I’m being Tagged?

I don’t think one can control how one feels about a character or a person. What’s bland for one is fun for another…

Burn them with fire.

Yeah, that’s what I expected from you regarding them.

Why I’m being Tagged?

I’ve done that by mistake a couple of times.

Or maybe my dear friend @EvilChani wants me to rile her up a bit?

Not exactly. It work for peoples, just not you.

I mean the rules of ‘To each it’s own’ and all that?

Just think about it! You get 4 Hotties, and you decided to go for the Slut of the group!

Talk about bad taste! may as well just ask for a Gigolo at this rate! Or a bordello?

Hm, think she gonna nuke me?

As an aroallo person, I don’t really get the feeling that M is completely aromantic myself! I do think they’re probably on the aromantic spectrum, but then they’d be more along the lines of grayromantic. But I think we’d need more insight into their romantic and sexual past to get a good grasp of it, which I honestly doubt we’re gonna get.

Yeah, that’s what I expected from you regarding them.

You read me quite well, then!

I think one thing is that the first books I ever really read and enjoyed were sci-fi/fantasy. My ideas of romance got shaped by those (and watching my parents happily bicker). Hell, two of my favorite romances of all time were in those books: Paul and Chani in Dune (hence my handle) and the romance in Glory Road by Heinlein. Of course, I also loved Time Enough for Love, but… we wont’ go there.

Not exactly. It work for peoples, just not you.

I was agreeing with you.

That yes, one person may like a certain type of romance while others hate it or find it bland. It’s just personal taste.

you decided to go for the Slut of the group!

I find M’s story the most interesting read. I made MCs for all of them, but Dezh (M) is probably my favorite with Zaraya (A) a very close second (even though A’s romance is ranked dead last for me as a reader and personally!).

Yep. I always have this image of Z and A having sex for the first time and Z being like, “You know, I’ve never done this before, but why don’t you let me lead…” Because he’s not doing it right, lol.

F and Jax, I have all sorts of images of them trying kinky shit and having no idea how to go about it. Jax, being “sexily” spanked by F: This is weird…
M, from the other room: You aren’t supposed to tell jokes while you’re doing it, dumbasses!

You get 4 Hotties, and you decided to go for the Slut of the group!

You’re one to talk. You got 4 hotties, and you decided to go for the one that’s emotionally unavailable.

Also, that just means M’s better at it. If I’m getting surgery I prefer a surgeon with experience, I dunno why it’d be different if I’m getting sex.

I don’t. Their personal story (M that is) is the one I have no interest in.

I don’t know. I think it’s probably because for some reasons, it remind me of the past of Wolverine? Ya know, the guy from XMEN?

I’m guessing it would be something similar. And I though Wolverine story was so boring.

Then again, to be honest? I kinda don’t care about the past of any of them. I’m a bit curious about A past, just to see if my intuition was right? And I’m curious about N…because it seem there is tie there. Dont care for F past either…

And I mean when I say don’t care as in ‘If its never revealed, no big deal’ kind of thing. Not ‘Dont care cause they are boring or something’.

I dunno, I just don’t feel like something is missing if it was never revealed. But again, that is just me.

You’re one to talk. You got 4 hotties, and you decided to go for the one that’s emotionally unavailable.

Lies and slander, I also love F. And I like N, but I’m finding their romance mostly meh by the end of B2.

I play the trump card and make bingo!

We are derailing the topic…

Anyway, I know you and EvilChani keep saying that A is emotionally Unavailable.

But I really don’t see it.

And I mean when I say don’t care as in ‘If its never revealed, no big deal’ kind of thing. Not ‘Dont care cause they are boring or something’.

I feel that way about A’s past. N’s interests me to a point, because I want to see him lose his shit and go all Angelus to my MC’s Buffy. F’s trauma is clearly his mom. M’s is the most noteworthy, even if it does turn out to be a Wolverine thing. I always loved Wolverine.

I also love F. And I like N, but I’m finding their romance mostly meh by the end of B2.

I love F’s (only with my childish MC, though). N, I found boring from day one. So I stuck him with a hellion of an MC, kinda Dezh-lite, only without the PTSD and emotional constipation from shit caused by her past.

Anyway, I know you and EvilChani keep saying that A is emotionally Unavailable.

But I really don’t see it.

Really? A’s locked up tighter than Fort Knox. Won’t let out emotions, won’t get physical (because A’s demi, I know), but there’s nothing there. There are a lot of “almosts” with A, but they always pull back. Always throw out the snide lie that the MC means nothing to them and there’s nothing between them. If that’s not unavailable, I don’t know what is.

Edited to add: I’ve also always despised the “I can’t be with you for your own good” shit. That pisses me off quicker than anything in “romance” stories. Why? Because it’s bullshit. You want to protect someone? Then be by their side and face trouble together. You can’t protect someone you aren’t with. Believing otherwise is idiocy and selfish because, in the long run, every time someone says that, they’re really just doing it to protect themselves. At least have the balls to admit it.

We are derailing the topic…

There’s a segue into the trolley problem (or possibly bumper cars) here SOMEWHERE, but I just can’t quite find it.

I am disappointed in myself.

A is emotionally Unavailable.

If I wanted to be jerked along, I’d wear a leash.

M, smirking: I’ll get you a collar, sweetheart/handsome, and we can see if it does anything for you…

I’d say I walked right into that one, but we both know M would respond with “If you’re still able to walk, I’m doing something wrong”.

M, smirking: I’ll get you a collar, sweetheart/handsome, and we can see if it does anything for you…

I’d say I walked right into that one, but we both know M would respond with “If you’re still able to walk, I’m doing something wrong”. 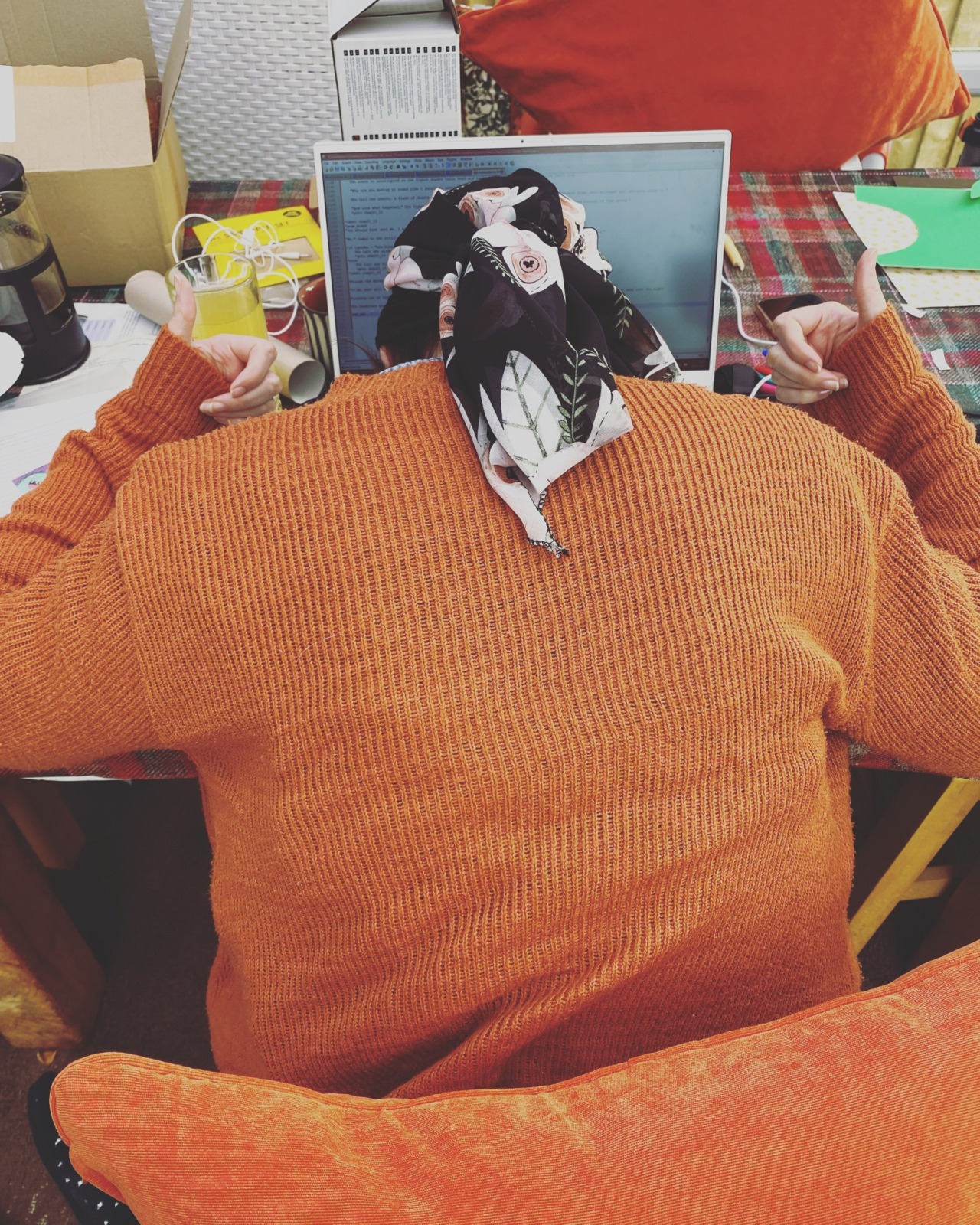 THE END. Now for editing, testing and submission to Hosted Games!

That is awesome! Maybe it really will be out on the expected date, depending on how long editing and beta testing take. It takes HG/COG what, like three months to do their thing and publish once it’s submitted?

it already has a release date 6 april🥲

Yeah, I know. I was just hoping that’s when it actually comes out. There’s still editing, playtesting, etc. to do before submitting. Not sure how long HG/COG takes after submission, though…

So, what do Christmases look like with Unit Bravo, or will we find out later in the series? Genuinely curious, and wondering what my detective should get his chosen RO if we do, lol. Connor should probably get Farrah something cheery, and Anders should probably get Nat a book