When we asked other authors before, the average was anywhere from 3-6 months. 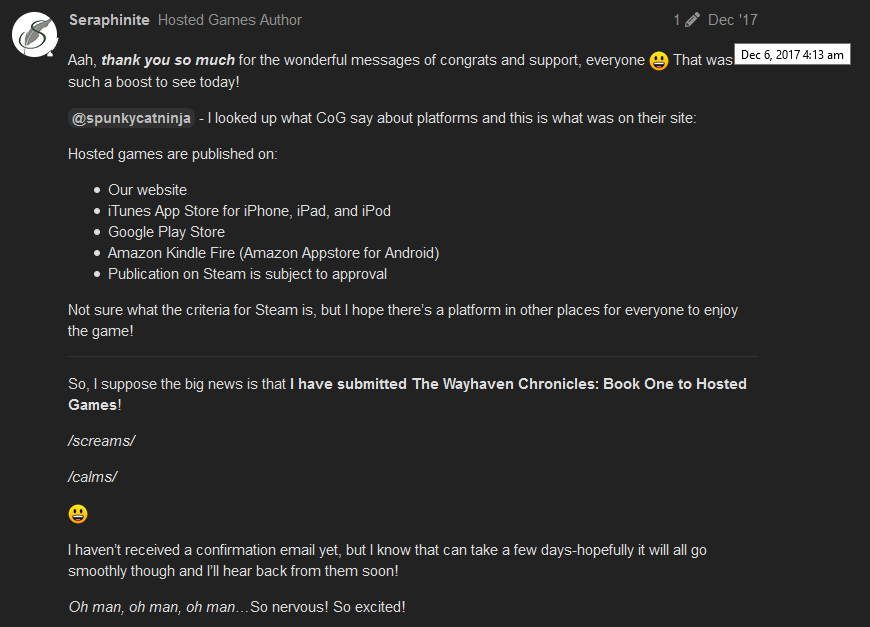 Wow! It was almost exactly three months to the day!

Anyway, much as I would love to gush about a smol three month wait, I must get into adult mode and advise caution, my friends. CoG is releasing lots of games through Hosted Games, probably more than they ever have before, so I say maybe temper those expectations a little as it’s usually first come, first serve, and there are lots of games ahead of Wayhaven to be published.

Then, TWC Book 2 should be out either January or February if there aren’t complications. So close so far…

Why does it take THAT long to process and put it up on the website/store?

This means an editor is reading over the game to make sure it works/adheres to company standards. This can take a while as CoG is small with only a handful of editors, one of whom is tasked to read over not only Wayhaven, but lots of other games that are submitted. So it can take a while just for the copyediting phase to be finished, especially if there’s issues as then the author is expected to fix things and then re-submit, which can just extend this phase of publishing.

That means that they’re seeking to make a profit. Part of this means that they have to be smart about how often they can release games.
Releasing every single game they receive as soon as it’s finished can not only be chaotic and confusing, it might also drive sales down.

Say two games are finished in as many days. The first game is finished and published Monday. It’s a game lots of people have been anticipating and saving up for. They obviously buy it and have fun, but then they wake up the next day and there’s another game out that they’ve also been anticipating. What if they can’t afford a second game in the same week? What if they just don’t want to purchase that many items so quickly? That means that sales of the second game go down.
And even if they announced release dates in advance, if they’re too close (say within the same week) then the same thing happens, as people will choose one game to purchase over the other rather than make two separate purchases. This means CoG loses money, which means, well, that we wouldn’t be getting as many games as we are now.

So to avoid that, CoG only releases games on Mondays and Thursday a week or more apart, and they keep from playing favorites by releasing games first come first serve, so any games submitted before Wayhaven are likely getting published first. CoG has to stagger releases and separate them by a healthy amount of time like this in order to avoid saturating their own niche market, a niche market with very thin margins as it is. Any misstep and things can get real tight for the company, which is only bad news for all of us as it might mean less games.

So as much as we would all love an earlier release for Wayhaven, CoG has to play it safe with how they make their money, which means we gotta be patient.

And the author, too! So it would be bad for all participants. (Except for those that want just that one game, I guess. But that’s life.)

Aah, @Liza_P ,thank you for posting the links to that! I was having trouble getting on the forum, urgh. But I’ve finally made it on, lol! [betapic] It’s that time, guys! I’m putting out a call for volunteers who would be willing to beta test The Wayhaven Chronicles: Book Two and help me finish it off to be the best it can be! For people around the last time I did this, it’s gonna pretty much exactly the same process as Book One’s beta test

I’m looking for people who: Can com…

Hey i would like to beta test if thats ok

A gentle reminder: the title of this thread has a post# reference regarding the beta test. Please avoid posting anymore “may I join beta test” post. Thanks.

Edit: You could also use the the jump to post function found below or use the search function of this forum.

The call for beta testers is now complete!

Thank you so much to everyone who applied to be beta testers! I’ve had so many more than expected! To know how many people want to help has put such a smile on my face, you wouldn’t believe

I will be going through everyone’s emails today and choosing testers ready for Saturday!

I will be emailing everyone back, regardless of if chosen, just so as you know. I don’t like to leave people hanging! But this will be over the next couple of days, as it’s gonna take me a while to reply to the amount of emails I received

Hope you’re all doing well, and I can’t wait to take the next step, hehe! <3

Can’t wait for book 2 . A huge fan of this series I have like 20 saves from book one . I m a huge dragon Age fan as well I can see where d a has inspired each romance
F is like Alistair
N is like varric (sweet and caring,if only varic was an option)
A is like fenris , in my opinion
M is like zeveran .

Cannot wait to see if I am chosen, but even if I am not chosen I know that there were so many people that applied and I know that it means that the best version of book 2 will be what’s released to us when beta testing is finally complete. Hang in there, Sera, you’re almost there! Also, for those conventional work-week people… Happy Hump Day!

congratulations to sera for all her latest accomplishments!!!

despite not being very active on the threads, this series means a lot to me and im glad to witness this masterpiece chef’s kiss muah! 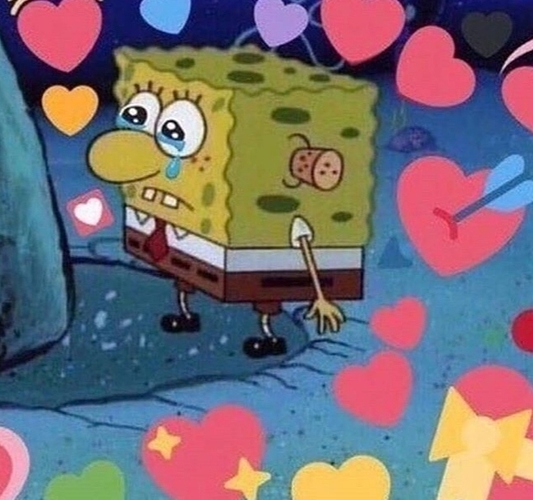 ignore the fact that crappy memes is all ive ever provided for this fandom.

As some of you may have seen from my earlier post, I had a massive influx of emails for beta testing! It was incredible and so touching to know how many people want to help make Book Two be the best it can be!

I’m still on schedule, so things are going incredibly smoothly, if very busy.

Really hoping things stay on course for the rest of the month, hehe

Hope you all have a wonderful weekend! I’ll update you call again next week

Aww man I love this series and can’t wait for the next book. You have done some amazing work and I just want to congratulate for the work you have done so far.

I was surprised that she sent emails to those even who weren’t chosen, the fact she did that says a lot on its own. I couldn’t be happier to support her and her writing. I eagerly await book 2!

I sincerely doubt that. If you check the waiting list the releases are already into “April.” It’s been over a year for one of the books I’m waiting for and wouldn’t be surprised if it takes another year or so for this one as well.

At the time that @Zarathras made that comment, the latest a Hosted Game was scheduled for January. If you click on the pencil icon at the top right corner of Jason’s comment, you can see that the latest dates were only added a day ago.

That’s not to say you’re wrong, of course, as now that the Hosted Games queue has been updated a later date does seem more likely, but neither was Zarathas wrong given the information they had at the time.

low-key kinda want this to happen