If the MC goes through something traumatic, all the vampires will respond in their own ways. M will soften to the MC as the story progresses, but they aren’t always very tactful. They don’t always do it to be mean (sometimes though they will depending on the tone of the conversation), it’s just they’ve not had to deal with a new member of a team or anyone new for a very long time, and even then they’ve never had a reason to try and be nice to other people.

Only Book One has been released, and the Book Two demo

There’s still a lot of character progression to be had for both the characters and the MC!

As for Bobby, well, they’re just not a nice person, lol. Not all characters need to be balanced in good and bad. Some characters—as with people—are just not very nice.

Hope that helps and you can continue to enjoy the story! There’s still a lot to come

If the MC goes through something traumatic, all the vampires will respond in their own ways.

As for Bobby, well, they’re just not a nice person

Then it’s no wonder why I liked her.

Finally the full demo is out! Come to me, my vampires! >w<

I love the love triangle route the most…such a cruel person I am…but I cant help but love them both. >w<

@Mewsly thank you, I didn’t know that. I only played it with one type of main character so I didn’t get to see that.

@Seraphinite I’m sorry if I said something that’s spoilers but thank you for responding and I’ll probably play mason/Morgan route (they don’t seem that bad from what I seen of the demo)when all the books are available but one more question, will all or any of the romance options eventually apologize for how they treated the main character at the beginning, specifically Adam/ava, F, and mason/Morgan in book two or the later books? That’s all I’ll stop now.

You know, just a random thought, but i wonder if one of the books will be about the Agency eventually saying screw it and just deciding that one person isn’t really worth all the hassle. Greater good kind of thing

I think this is best discuss over the TWC discussion thread. See link below:

I feel like Doug might’ve grown up without a mother, especially since the Mayor seems to have a big ol’ crush on Rebecca.

@Nathaniel - I don’t wanna go too much into what happens later in the series, especially during romance routes, as I’d rather people experience it in-game!

It’s been a great week!

I added in the edits and things to the demo and updated that yesterday, so hopefully that should run a lot smoother now.

Also got out my plan for Chapter 7 to begin prep on it, and as some of you may have seen, I am intensely excited for January to come around so as I can begin writing it, hehehe!

But the start of prep is going well, and I’m really glad I’m taking proper time to do this before writing…it’s gonna be necessary, lol!

So yeah, just a short update this week, as it likely will be until the new year now.

Hope everyone has a wonderful weekend

Me at reading even small updates to this:

Takashi ;good job wish you good luck
Shin what hell Takashi that bad luck if you say good luck on opening night
Takashi : what do you say wish them luck on The Wayhaven chronicles
Shin: break leg
Takashi : break leg?

i know…good things always seem to take so much longer ;w;

But when {a_she} frowns deep and opens his mouth to respond, Nate springs up and clamps a hand around Adam’s shoulder.

Straight female detective, picked the ‘Am I going to have to start adding padding to my office furniture’.

I just played, the love triangle path. Yes, pretty late(plz don’t judge me). So, it was great…but nasty! And here by nasty I mean literally nasty. Playing the love triangle means you have to hurt one of the two (not literally. BUT STILL!) - either Nat or Ava.
Sera is an incredible writer but, seriously…I can’t choose between them!
I mean… CAN ANYONE DO???

This love triangle is gonna end up VERY rough, for one of the two vampires.
Never gonna try the LT again…

But, then again, maybe I will

but, seriously…I can’t choose between them!

Either to do following:

I really can’t understand the appeal with LT much but good luck to those who are going to do it.

I’ll be going on my Christmas Break starting today!

I’ll be back on Wednesday 2nd January !

Hope everyone has a fantastic festive season (and if you don’t celebrate it, then just have a fantastic time in general!) and a brilliant New Year!!

Talk to you all in 2019 and thank you so much for all the incredible support and positivity you’ve all given this year. I can’t wait to see what the next one brings and diving straight into Chapter 7! <3

I could say the same about those who like M lol

but with the LT…it show another angle to both ava and Natkins . I think…at least to me , is the appeal . I get to see not just mc----feeling toward A or N , but you see the duality between 3 peoples mc+a+n =

I mean it’s like seeing say M ex show up in town , you will see a different face on M depand how that break up was . Or say F having vampires family showing up out of the wood work (man that be akward and hilarious) .

but mostly the angst…we get to be crushed so we can love the fiercest…thats if we survive…(fiercest that even a word ? lol)

@Seraphinite enjoy! hope you have fun ! I personally don’t celebrate but planning on stuffing my face with Buches! gonna be very nom nom

I’ll be back on Wednesday 2nd January !

See you next year! 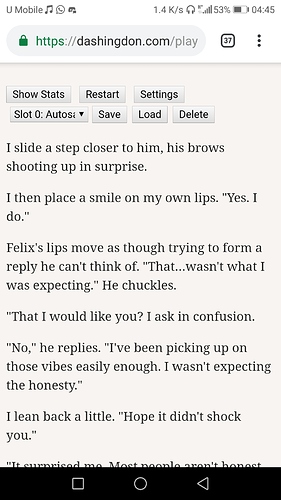 "That I would like you? I ask in confusion