I mean, I don’t think we’ve gotten the option to tell her to back off and just keep the relationship professional yet, which is kind of weird to me.

^^This. My main MC would flat out tell her to back off and to quit treating her like a child, whether she’s hurt or not. If she has such issues with the dad’s death, she should see a therapist, not project her insecurities and feelings onto the MC. It’s unfair to the MC, and highly unprofessional.

And when we do get the options to say something like “Dude leave me alone” we’re kind of forced to be polite to her. I’d much rather we just say “Leave me alone, I’ll work with you in a professional capacity but nothing more”.

Exactly. And, given how Rebecca continually shows the same “worried mom” reactions in front of the team, my MC wouldn’t be polite at all about it: “Don’t touch me, don’t ask me if I’m okay every time you walk into the room and stop the frantic worried mom act. You were never around when I was a kid, and I got by, so I certainly don’t need this bullshit right now. We’re coworkers. Either treat me with that respect or I’ll lodge a complaint against you with your superiors.”

Some of my detectives would not care that they made her feel guilty or upset, but the game kind of forces that on the detective.

Same here. For detectives that are extremely distant with Rebecca, they would not notice her pain or the fact that she’s upset. How would they? This is someone they are either apathetic about or hostile to, so they aren’t going to pick up on the physical cues they might get from someone they actually give a damn about.

I think it’s an overt attempt to force the MC to bend to Rebecca’s will, really, which makes certain of my MCs even more resistant to ever letting Rebecca through those steel walls that are between them. And, as a reader, it makes me completely agree with the MCs who continue to be hostile to her–she really needs to treat the MC with more respect.

Between fussing over the MC when they’re around UB (whose respect they need to be able to work with them, which is impossible to achieve when the MC’s “mommy” is constantly blathering on about how she will protect the MC), and now showing up at the MC’s place of work to all but demand a chance to be the one the MC turns to for support, she shows a complete lack of professionalism, as well as a complete lack of respect for the MC and their positions as detective and team member of UB.

Even my MCs who had a good relationship with her are beginning to lose their patience with her because of the way she treats them in front of UB, and for good reason. Personally, in their position, I would’ve shut her down from the first time she started her crap about protecting me.

Well I just found an interesting fan-fic where the detective knows about the supernatural and all that jazz, so-

I’m gonna go off to some forgotten corner of the internet to read it before playing the first two games, again.

I’m curious & intrigued about Bobby’s involvement so far. I wonder if the investgation attempts would snowball into a consequence if I purposely and continuously fail to allay Bobby’s suspicion, like supernaturals being exposed in the town paper.

I felt really heartbroken at Verda’s choice to leave the town if he discovers the truth. I love having him around but I get that he wants to protect his family against danger

The demo was great. I love how there was romance early on. I also like how Mason and my MC keep getting interrupted when making out. They would make out forever if they weren’t stopped.

what else would M do???lol

Any form of daily exercise is essential for a healthy lifestyle and M is, well, really health conscious. wink wink

Ah I’m dying to see if my MC No.1 can form a relationship with the most stubborn, frustrating Ava in book 3. Every time her shell seemed to break, she just pullout. It always seemed “this is it”, then turned out “not there yet”.
Ugh, I love it

A post was merged into an existing topic: The Wayhaven Chronicles General Discussion (SPOILER FREE FOR BOOK THREE!)

@Seraphinite I want to thank you for the moment where we can yell at the mayor. On my character’s behalf, I appreciate it.

Where is that option?

One way I know of is if you have Sarcastic as a primary part of your MC and then pick one of the sarcastic option (think it is ‘do you ever talk normally’ and/or ‘nothing like an argument’) when they come to talk to you – that is when the lovely mayor will drop a nasty comment about your father, and then you can ‘vent’ at him.

Oh boy, oh boy!~ Just finished Morgan’s route of Book Two and I that there’s already a demo of Three? Really made my day after a long and tiring shift.

I love this entire series. I have never spend money on an app til I found this series. Can’t wait to read it!

Woo another F fan. Though I have Farah and I completely agree. She is my main LI for most MCs in different play throughs.

Busy one this week, but got a lot done so it was well worth it!

Got the romance scenes finished! Strangely, M’s and F’s kind of veered off course to what I had planned, but guuyyysss …it’s so good! I’m SO happy with where it ended up leading and not only that it just felt so right. Like, sometimes I’ll get writing and it will go in a different direction but I’m really feeling it and I get this huge rush from it because it’s just going so well!!!

That’s what happened so much this week

I do love writing romance so much it’s ridiculous, hehe!

So now I’m onto the last section, though there’s a lot of variation to this scene to make it run smoothly depending on choices your MC has made so far.

A shot of what my plan looks like right now (with spoilery bits covered, obviously! ;D): 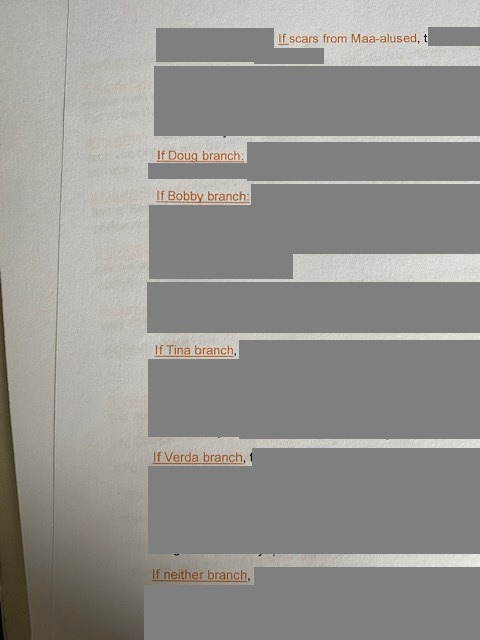 All of those just go into making the first scene of this last section. So you’ll get a combo of the above scenes in this bit depending on what you’ve chosen.

…I hope that made sense!

Creek Edge has fallen behind. I’ve just been really eager to push forward on Book Three. There’s a lot more involved for Book Three that ever ‘simple’ chapters like chapter four are taking that much more! But I will hopefully find a better rhythm soon so as I can slot Creek Edge back in regularly.

Hope you all have a fabulous weekend, and I’ll update you again next week! <3