This was just a variable issue – It’ll be fixed in the next update!

Who do you have as Secretary of the Treasury?

This is an excellent game so far. Keep going, you have a special talent for writing and I especially enjoyed the potential legislative maneuvering the player can achieve (eg; federal abortion ban/ Medicare for all)

So personal story time (not tellin my real name whad ya except?)

So im currently on a vacation with my family in Dubai (not tryin to flex here) wait before that you may have seen a difference in my profile picture because I have finally found what I wanted for so long a Russki unshanka yep a unshanka well lets worry about that later and hey at least you get to see my eyes now eh?

So went to the mall it took us from 9 am to 5pm to dam finish the trip to the mall my legs were killing me at least i got to see the burj khalifa and dubai aquarium so we took a taxi but we arrived at the wrong hotel but we were close to the hotel we are staying in so we rested for about 2 hours before we went to the global village so there was a concert going on pretty good concert ( in a nutshell this place has multiple contruy themed shopes and these wernt small shops think of a very small bourgh im probably exagerating but its the best i got and then me and my dad went to the Russian section and that were i found the beauty of a hat the unshanka i asked my dad to buy it for me and he accepted so after that i wore the hat until we got home were im currently writing this in 1am oh and note for the love of god please moderator please don’t remove this post please. Oh and heres a better detailed photo of me wearing the unshanka 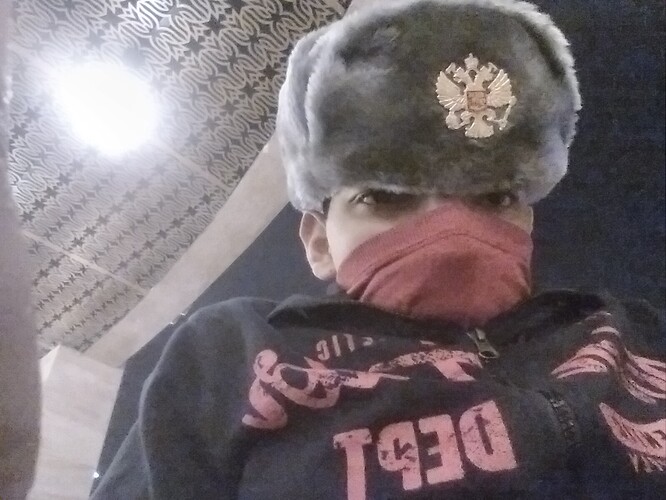 Hello everybody! Happy New Year and a happy Martin Luther King Jr. Day for those of you in the United States. I’m aware that it’s been a bit of time since my last post and the holiday update, but I have been writing nonetheless!

In other news, my semester starts tomorrow, so I apologize in advance if I forget to post public updates as much. I fully intend on writing throughout the semester, but as of right now, my class and work schedule has me busy from 7 AM to 7 PM Monday through Friday. I will still be writing over my weekends, but please be patient with me if updates aren’t coming as frequently!

Thank you all again for all your kind messages and suggestions since the holiday update, and I hope to release another update for my Patrons including the entirety of Chapter 3 soon!

Is it possible to the option to space mining operation done by NASA or private company ( MC biggest finance donation came from a surtain someone ) as space will become more and more important going forward for safety of a nation defense and economy ( GPS play a major role in every day activities be it military or economy) of course it will not lead to colonization of Mars or any major planet but it could expand existing infrastructure or new infrastructure. it will be interesting to see how MC action make a huge effect on space colonization ( make it a lot easier) in the future in epilogue

of course it will not lead to colonization of Mars or any major planet but it could expand existing infrastructure or new infrastructure.

Colonization of Mars or at least landing is actually a possibility in the next 8-16 years so we could be the president who sponsors the first mission to mars.

I highly doubt we’ll be anywhere close to colonizing Mars in 16 years considering we won’t even initiate manned missions to Mars for at least 10 years.

If we can manage to completely terraform Mars in the span of 6 years to meet that 16 year deadline, surely we can fix climate change on Earth much more easily.

Ofc there’s no chance of terraforming, but landing of ppl is possible. Elon Musk was saying that there would be ppl on mars in 2030, which I highly doubt, but in 2040 could be an actual possibility of mission to mars.

I highly doubt we’ll be anywhere close to colonizing Mars in 16 years considering we won’t even initiate manned missions to Mars for at least 10 years.

If we can manage to completely terraform Mars in the span of 6 years to meet that 16 year deadline, surely we can fix climate change on Earth much more easily.

Well yes, landing of people is already possible. It hasn’t happened yet, but not because it can’t happen. Just, like… The nearest mission is scheduled for 2033 at the earliest. It’s already scheduled.

To the best of my knowledge, this game is set firmly on Earth for the most part. While the author has said a space race (I believe to Mars) is a possible outcome of certain paths, residence outside of Earth beyond things like the ISS /space mining is probably far outside the game’s epilogue scope.

I understand that it not in the game to start space colonization but space infrastructure will also play a major role in every day activities back on earth in both economic and military appreciation such a GPS . Such a GPS guided missile which is now a day back bone of all advance millitery and it very important for any economy as it allowed good to transfer more smoothly and quickly with any big risk and crucial roll of communication in any war can not be underrated and internet

To quickly address some of the discussion about Space:

As @Snowflower mentioned, the focus of the game is certainly set firmly on Earth. As they also mentioned, however, a space race in a sort of Second Cold War is absolutely something I have planned.

I haven’t fully planned the farthest lengths in terms of space travel/exploration – it will likely be possible that you’re able to oversee the first human landing on Mars. Whether that human is from the U.S. or another country will depend on your choices.

As for other suggestions, I’m certainly open to them. I’m certainly open to something like another International Space Station (the current one will be retired 2031), or a lunar colony (still on the fence about it). All in all, space technology won’t be a huge portion of the story, but I as usual am always willing to take into consideration all of your incredible ideas!

IMO a full lunar colony is a bit out there for a 20-minutes-into-the-future/only mildly divergent alternate history game like this one, but a more tentative installation/legwork for Luna could be plausible. (Manned) Mission Mars or (I)ISS is well within the realms of possibility (and cheevo heaven). Satellites and the like is not really in the President’s direct oversight but there certainly could be something our secretaries/VP/someone else brings to us in that realm.

In the context of space development, military use is also a hot topic. A sci-fi space war is unlikely yet, but new types of anti-satellite weapons, spy satellites, ballistic missiles, and anti-ballistic missile systems are being developed one after another.

If you need inspiration for space ideas I recommend “For All Mankind.”

Hey all! I just submitted the updated demo to my beloved beta testers, and am excited to share with you all the progress I’ve been able to do since my last update.

I also wanted to clarify for my Patrons, the entirety of Chapter 4 is not released yet. I’m planning on making some minor tweaks and ensuring that there aren’t any issues coding-wise, and I’ll send out another message once it’s finished.

I have been insanely busy between work, but am very happy to still be able to find some time to write. Thank you all for your comments, and I look forward to releasing an updated version of the story soon!