not biological, i did not grow up w/ him, it’s a fictional story, & because of those 3 things- I don’t care. I want Yosif & if author says I can have Yosif imma take him , ty

well, when you raise him from the dead, he’ll practically be your slave or at least subservient to you, then you can do whatever you want with him. He’ll literally be yours

You know, maybe the witch hunters had a point.

Starting the Tozi fanclub. Please write more outwardly unpleasant beauties with a hidden soft side, thanks in advance. I have a problem.

I went with Lonnie. I like the “young, non-disillusioned idealist” architype.

After less than six weeks, The Nascent Necromancer has outstripped both The Magician’s Burden, which has been out for four years, and The Mage’s Adventures, which has been out for a year, in number of ratings on the omnibus apps, with 703 and steadily ticking up. It’s clear even before I see my royalty statement that TNN is my most successful story yet by a longshot. 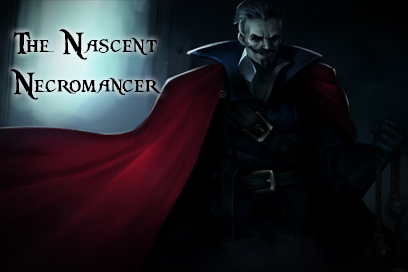 When you're falsely accused of sorcery, corrupt inquisitors make you the object of a witch hunt. Now, sorcery might be the only way for you to survive. 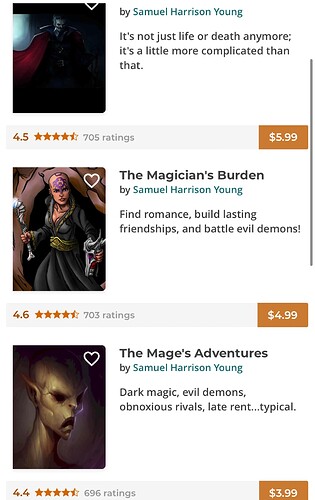 Congratuations and well done for sticking at the craft!

So, I got my first royalty statement for TNN. 3,300 copies sold in three weeks. That’s nothing exceptional as far as HG sales go, but TNN is still going to be by far my best seller so far. Thanks for the support, everyone. With those kinds of numbers, the sequel is almost assured, though I’ll still mostly be focusing on The Enchanter’s Misery and The Cruel Guardians until they’re complete.

I finished the book 1 and I already want to play the 2 !

Are those stories going to be published here or somewhere else? I’d like to find out more. What are they about? Any sneak peeks?

they’re Hosted Games WIPs I’m working on. the demos are in my topics

Any reason why you decided to cancel the sequel and update this? Are you going to focus on your other titles more now that you have one less book to write?

I realized that I was dragging around 4 incomplete series, none of which had very much demand. I’ll be updating the Trial of the Demon Hunter trilogy, The Magician’s Burden, The Mage’s Adventures, and The Nascent Necromancer over the next couple years to bring them all to proper closes.

I’ve made the decision not to move forward with any sequels for The Nascent Necromancer. Instead, I’ll be making a big update to it. It will be at least 100k words, enough to tie up the Yosif, Goro, and Graluk plotlines and bring the story to a close.

Since the game is already published, I’ll just be holding a closed beta in a group chat on this forum for anyone who wants to read the new chapters, look for bugs, and provide me with their thoughts.

If you would like to be added to the closed beta testing group, just drop a comment and I’ll add you when I get a good amount of people ready.

I want to be a beta tester.

Hey I would love to be a beta tester too :))

I woukd love to be added! The first book is one of the bestvon COG.