Thanks for continuing your game since I was worried about u scraping it because of issues with old character. I look forward to your next update

sorry i heve a Question will all the soul paths be implemented or only a faw in chapter 2 ?

@pixie124 All five soul paths will be available in Chapter 2, and I hope I manage to have them ready for the December update. I’ve been struggling with a lingering headache for the last few days, and because of that, I wrote 5k instead of 10k (the number I was going for). Still, I hope things get back to normal soon!

Progress Update
I don’t normally post progress updates here, but since it’s more or less Christmas, I thought I might as well tell you where things currently stand.

We’re somewhere in the middle of Chapter 2. The introduction to the path system is done, same with the scene that lets you pick your path. I also managed to write two small scenes that happen after your path event (one with Sky, one about MC’s dilemma).

As for the path events, I finished working on the second one today. Sun and Mind events are done, and I still need to write the remaining three (Sound, Ice, and Mischief).

As of today, Chapter 2 is about 19.5k words long, which puts the total wordcount at 80k.

Awesome job man. Take a break and enjoy the holidays. This chapter is already an improvement from the old one even if it’s half done.

I love how the story flows together so well. It’s a really unique concept and I love the Odyss scenes so far in particular. Very curious as to what he’s actually up to when he disappears. Sephtis is also a wee gem of a character. She’s just really intriguing.

I went with the ice path and so far so good, 2nd chapter flows just as well as the others.

I can’t wait to read more. Thank you for this little marvel of a story.

@Hunter Thank you! I’m glad you enjoyed the story, and even more so that you liked (more or less) the Ice path. I think it’s the story for this path (at least at this point) is the weakest out of the three that are available, so I’m glad it doesn’t feel too bad.

@Kxng Thanks for the suggestion! I’ll make sure to add some mean options. They won’t include these particular words, as I prefer not to use strong language, but I will add sth.

@geldar I could make it possible to pick such an option (just for the sake of it), but it won’t be possible to start a purely sexual relationship in the series. The MC can either develop a romantic relationship with one of the ROs, or they can become friends with them (both are valid), but I don’t plan on having hookup or fwb options.

@geldar I’m afraid I won’t be able to do much about this, as this is a very specific issue that might make things a bit confusing for most players. I could change “I’m not interested in romance” to “I’m not interested in romantic relationships,” but I don’t think I can to more than that. Your MC’s orientation is never mentioned in the game, and this choice exists only to figure out which romances (romance paths, like in Baldur’s Gate, Dragon Age or Mass Effect) will be available to you. It’s more about the ROs than it is about the MC.

The sexuality choices don’t seem to have an option for aromantic, but not asexual people? Maybe there should be a “not interested in romance” option that doesn’t disable relationships?

@Dariel Aromantic doesn’t necessarily mean I’m not interested in romantic relationships, nor does allosexual mean I want hookups or FWB situations (especially considering most alloromantic people are also allosexual). It means my attraction to someone isn’t based on romantic factors. Aromantic is a rather diverse spectrum. I suppose specifically I’m cupioromantic (which is a spectrum in itself), but that’s still on the aro spectrum.

Edit: I changed the last soul path from Color to Mischief, and I’m currently in the middle of writing the path event. Mischief was actually strongly associated with my ideas for this path, and I just decided to embrace it fully. In short, your MC will be able to give people good luck or cause them misfortune. There’s also a leprechaun involved!

I’ll make sure to add a little bit of both.

“Och, you wouldn’t believe how involved I am!” 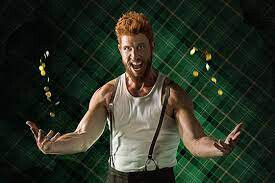 I’m going to take the next couple of days off, and then, I’ll start working on the second part of Chapter 2. I hope to have it ready by the end of the month. This second part will add another 20-22k words to the chapter. (I’m also going to add those mean and bold responses in your MC’s talks with Odyss.)

Hope you enjoy all the paths!

The total word count is now at over 103k, which means we’re about 25% done. The first book is going to be more or less 400k words long (twice as long as Temple of Endless Night!). I still hope to have the whole thing done by the end of Summer 2022.

Ngl I am highkey jealous that we couldn’t death and Shadows as a path but otherwise I love it. 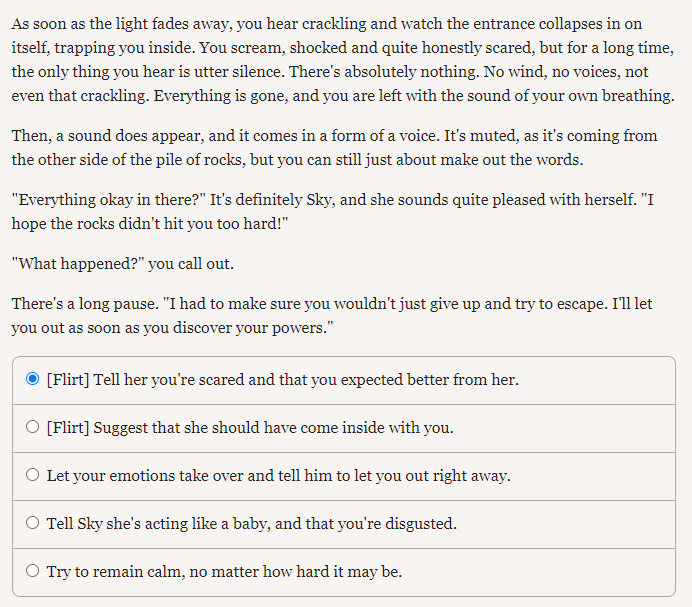 Option 3 treats Sky as a male when she’s female in this playthrough and other options get it correct.

Also I don’t know how but I got to 105% Playful and totally unserious. 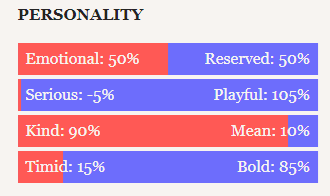