I like when Romance, like any choice in the games I play, has consequences. What happens if our RO finds out we are flirting with someone else? Do they get angry and leave us or do they get jealous and try extra hard to capture our heart? Do they fight each other if they find out? Do they try to secretly drive an rift between us and our other RO? Do they even care and do we care if they care? Romance is one of the most requested features in the games of this site for a reason, everyone is a sucker for a nice and/or dramatic love story. Basically give me options and give me consequences for my bad choices

Given the breadth of responses that are requested for multiple RO scenarios, I think I will probably have to disable the option altogether, so as to avoid getting overwhelmed by branching.

This is just to note that the new demo is going up this very morning – as soon as I finish hanging my laundry lol.

Edit: Despite my best intentions, technical difficulties have prevented me from uploading. I’m working on fixing the problem.

While I grapple with my hosting difficulties to bring you version 0.2, how about looking into a bit of worldbuilding?

When I decided to write a game made almost entirely of letters, I knew I needed to make a decision about whether to use the real-world calendar or to make one up. In the end, I decided to use a calendar with a structure almost identical to the common (Gregorian) calendar in our world, but with different names for the months and weekdays. I use Donjon’s calendar page as a helpful tool for keeping it all straight.

Days of the week:

The journal line Ag 14 Sun 1696 AL can be translated to mean the 14th day in the month of Sun, in the year 1696, which is also the weekday Silverday. AL is an abbreviation that refers to the current era in Cathrea’s history.

Note: Due to some technical difficulties with Dashingdon, the up-to-date demo for The Flower of Fairmont is currently being hosted on itch.io: 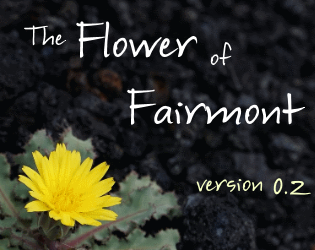 The Flower of Fairmont demo 0.2 by Zinc Alloy Games

The Flower of Fairmont has updated to version 0.2! This version goes to the end of week 2 and contains a week’s worth of events, plus four new letters from your four correspondents. In week 2, you can explicitly cut off correspondence with any of the four, and starting with week 3, the person you cut off will no longer send you letters. There are also a few hints about the MC’s family history – and a small tease for the first scene of chapter 3.

Chapter 3 is in early progress and currently stands at about 1700 words. While I am working on chapter 3, I will update the thread with some worldbuilding posts, and perhaps some character aesthetic boards.

What kind of feedback am I looking for:

for example how you hint that our dear Mr A. Is seemingly not seeking out our dear father and thus trying to sort out the problem she has with the courtship. Makes me wonder

Also I find Beyville he could be an interesting character to pursue.

And the mystery of our wild Friend and lost soul Kyre and Noe … god there really is much replay ability. Also I like all the characters to far but I don’t really want to write to much ( I am sitting in my university library and should be studying

All of it I think it the story has a lot of plotlines that are holding my interest. I like how the text just invokes the feeling of really being in the time. You really hit the mark with it without making it uncomfortable to read.

Hm I mean if something interesting is happening sure. If you have a lore for that that is. I do think the interactions in letters are very accurate for the time. You do give enough information to fill out some blanks so you could but it is not necessary I think

Hm, I mean my main MC would not do that. But it could be fun to create a character who cuts out a character. But the downside is, that it would also cut content.

I found myself unable to reply to Jessa’s last letter - perhaps it’s a bug? I could reply to all the other ones I received.

Hmm. Who did you address the first, very long letter to? Unless you’re journaling for the week’s main events, you should only have three replies available, even though you received four letters.

Oh, alright - my first letter was to Jessa, but while I received an answer, I couldn’t write back. I did do the journaling as well. Is that intentional?

i love you, Hazel

No, that does sound like a bug, actually. To be clear: regardless of when you read each letter, every week, you only get either a long letter or a short one, for each correspondent. If you write a journal (that is, address your “long letter” to none of the four correspondents), then you should be getting four reply options. It’s not at all dependent on who you wrote to in chapter 1.

I will look into this bug and update the thread when a fix is ready.

I feel I need to clarify something about the format of the game.

Chapter 2 provides the model of how future chapters will be structured, specifically, the second half of chapter 2. Every week will begin with the MC describing her experiences in detail, either in a long letter to one of her four correspondents or privately in her journal. This is the part of the story where you, the player, get to make choices about the events that took place during the week. It establishes the “canon” of what actually happened.

Each week, you can write a maximum of four letters, including the long letter at the beginning of the week. Letters that you write during the week are posted on Silverday. Post arrives in Fairmont by train, and the train only arrives once a week. Your correspondents will receive your letters a few days after you post them – during which time you’re already writing next week’s letters.

You can only write one letter to each correspondent per week. The letters you receive that week are replies to the previous week’s letters. This is for two reasons: mechanically, it makes writing the game much more manageable for me, as the epistolary format can be quite complex to write interactively; from an in-universe perspective, this is accurate to the level of technology that Cathrea has, and it’s typical of the letter-writing behavior of real people who lived under similar conditions.

I hope this clarification is helpful. I will try to make all of this clearer in the next version of the game, without the explanation text being too jarringly out-of-character.