Being the noble of a manor has its perks: you can enjoy feasts, fine entertainment, and even correspondence chess games with the king himself. Of course, there are many responsibilities that come with ruling over a castle and countryside too. You must keep ambitious bandits in check; hold court and consider your subjects’ many requests and problems; and navigate a complex political world where making one group happy often means making another discontent.

Yet no one ever prepared you for being haunted by a mysterious demon, or contending with a group of new radicals called anarchists. The demon seems intent on terrorizing you into adopting her own moral code, and the anarchists will never be content until they’ve toppled feudal society, starting with your own humble manor. Will you defeat your enemies first, or will they send your world crumbling down around you? Or, stranger yet, will you come to sympathize with their goals?

The Cruel Guardians is an epic interactive fantasy novel by Samuel Young, where your choices control the story. It’s entirely text-based, and fueled by the vast, unstoppable power of your imagination.

Which ROs did you romance?

Oh wow!! You have been updating a lot today @Samuel_H_Young. How long have you been working on this?

Roughly a year, off and on.

Thats impressive, and you just released Necromancer. Is this the complete demo then or you will add?

There’s still a huge amount to come. I’ve listed the chapters, including the future ones, in the original post.

Noticed a couple of bugs, particularly being unable to set the name of the male puppy (it seems to be stuck as ‘?’), but nothing significant.

I’ll be keeping this one on my watchlist and look forward to reading more.

Flai is just the best haha. Everything she does is wholesome

Just got to the back-walk massage too

Noticed a couple of bugs, particularly being unable to set the name of the male puppy (it seems to be stuck as ‘?’), but nothing significant.

This should be fixed now.

I noticed that our relationship with the demon increases almost every time we’re nice to animals and eat food without animal products, so now I picture her as That Vegan Teacher.

Just finished chapter nine. Yup. That Vegan Teacher is my faceclaim for Jelok.

Anyway, here are some mistakes that I noticed:

@Two-Bit Thanks for pointing those out. I originally had Jelok be a male, so I knew there would be some pronouns I missed.

Love the premise and will check it out as soon as possible!

Oh that explains it, i got confised whether Jelok was male or female

Found a bug. I picked spending 400 bushels for the repairs, yet the text shows both my and another option results later when I talk to Flai. 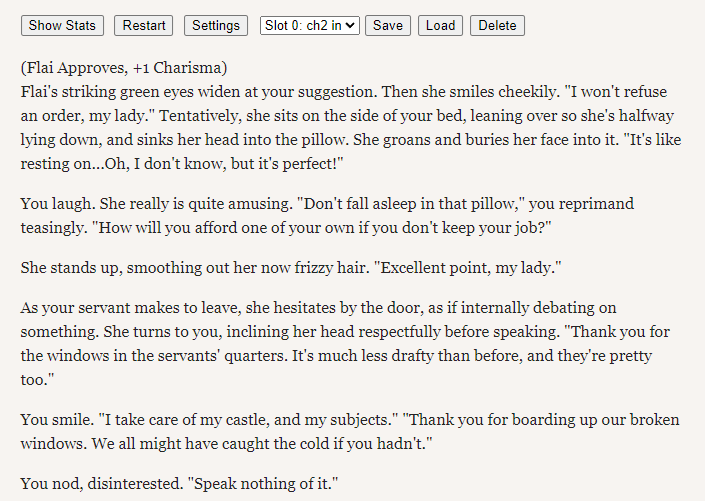 after the dance, this transition is just weird, is that supposed to be ‘s’ here?

Bug: does not register that I do posess stats needed (Intelligence) 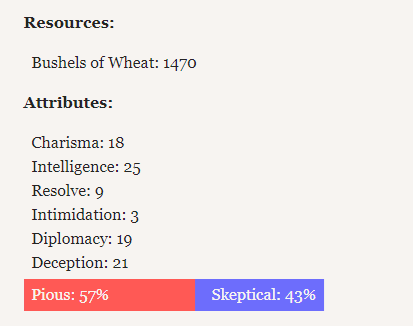 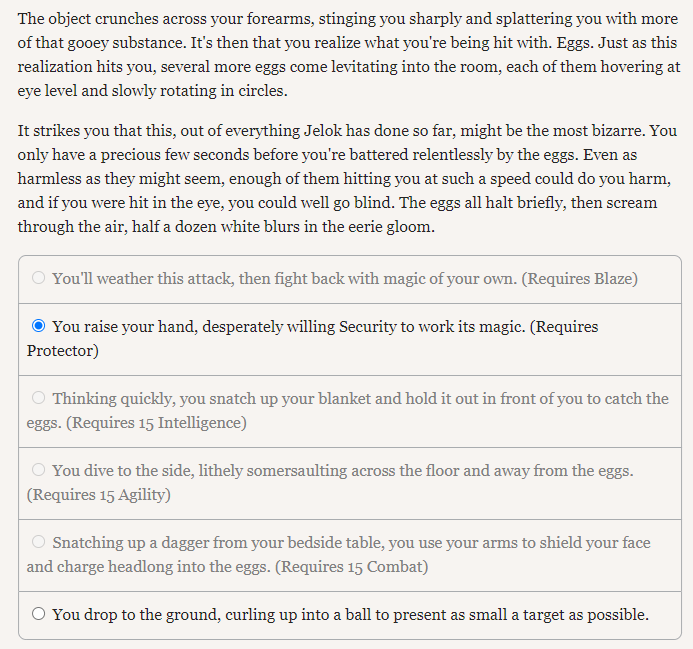 also, this is long story with amazing writing, so can we have some more save slots? ten, or so?

To the less technical part, I adore the characters. Jester is wonderfully cunning yet plays fool way too well sometimes. Priest is decent and pious fellow. Flai is absolutely wonderful to play with and I hope she’s romanceable. Amount of different options and ways to slowly shape the main character via the incremental choices is amazing. And this demon satyr? is quite wonderful even if I only got to speak in the latest chapter before the end.

Around what era of feudalism is the game supposed to take place in? It will probably influence my views of the anarchs quite a lot since a lot of their demands were literally not logistically, economically or physically possible during the early days of feudalism.

Also it’s funny how both your character and Emyla’s debate doesn’t actually touch on what’s actually most important for the people: Which system would be better at not having them starve.

Are you thinking of adding a cheat mode?