You play as Lieutenant Specter (Specter being a code-name, you may decide your real name), an agent of the Rebel Alliance, tasked with various missions to weaken and eventually overthrow the United Galactic Empire.

At long last the aptly named “Significantly Insignificant” update is live! Whew. So I ran it through randomtest.exe about 600 times, plus quicktest.exe once. Everything passed, so there shouldn’t be any errors. That said, I haven’t play-tested it myself yet so, please please please let me know if it breaks!! To those of you who are new to this: Hi! Welcome! Thanks for clicking on my forum thread! Why are you running away? No- Wait! I have Demo link! Demo Link!!! The Battle of Hoag’s Object …

Thanks for playing my game!!

Please leave some feedback in the comments, whether you loved it or hated it!

Thought it was a good start! Can’t wait to see where it goes

For those that want to help you with or contribute to the game how would they do it or get into contact with you?

Well, there’s two options: either through this forum, or by email. Though like I said at the end, as you pointed out: I’m only considering it; I haven’t quite decided it’s something I’m going to do. Mostly because of the legal complications it could cause.

Haha, Mass Effect was definitely a big influence for this, but believe it or not, “Specter” is one thing I didn’t take from that game. If you’re interested in finding out where I came up with that name, you’ll want to enable the “director’s cut” mode at the beginning of the demo. 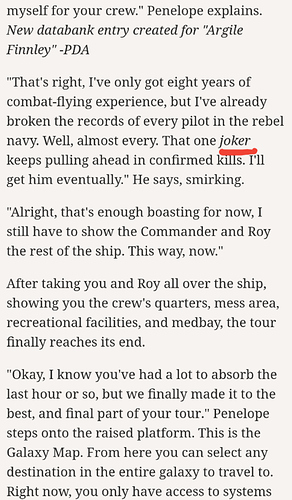 Oh the memories. So far getting a lot of vibes from Mass Effect, which is a good thing! Very interested in the following updates and what they’ll bring.

Really enjoyed the story. You have a good start and the fighting is really into the flow of the story. When first choosing the ships, I really thought that the third ship would have been one of the alien rebels ship long lost… Still we be enjoying the rest of the story as it proceeds.

Oh man, i just loved your writing style. So couldnt stop myself from commenting. Hope to see more of this soon.

I’m seriously loving this. So reminds me of mass effect. Ah the good old days

. Keep up the good work, can’t wait for the next update.

Is it just me or is the link broken?

Wow i certainly wasn’t prepared for that XD. I mean before i read any wip, the first thing i look at is the title and… Uhh it isn’t so appealing XD. But actually i really enjoyed what you have got so far, the story flow is really good, and i already like Roy’s personnality, aside of the MC he is my fav NPC so far. You have a good writing style too. Looking forward to the next update. Keep up the good work.

is the link broken?

Edit: It looks like Dashingdon.com itself is down! Awful timing for my demo

Does anyone know an alternative for hosting the game in the meantime?

Haha, Hoag’s object is actually a real galaxy! I picked it because of its unique shape (it’s a ring-galaxy) so that’s where the title comes from! Glad you like the story!!

The link is:
https://choicescriptide.github.io/web/
But you need a dropbox account (for storing your game files) to use it.

Thanks! I’ll give it a shot when I get a chance!

In order to run the game, you need to download the file from Dropbox first. Once the file is downloaded, using it should automatically open the game up in your browser. Hopefully there’s no issues.