Hi! the truth is that the concept of the game is great and i see a lot of potential in the game, btw when I chose the option of “Though you have promised Barrett to be friends with him forever, you find yourself having romantic feelings for him” I get the following error:

Something that I think is necessary to mention is that about 30 minutes ago I chose that same option and I did not get that error, I hope that notifying this error will be helpful, have a nice night!

(btw mi first language is not english so sorry for the grammatical errors!)

Oh, that error must have appeared because I added some new code in that choice. Just fixed it and updated the game. Have a nice night on your end, as well! Also, no need to worry about grammatical errors, I can understand you well!

Just wanted to say that I’m really enjoying the story so far. 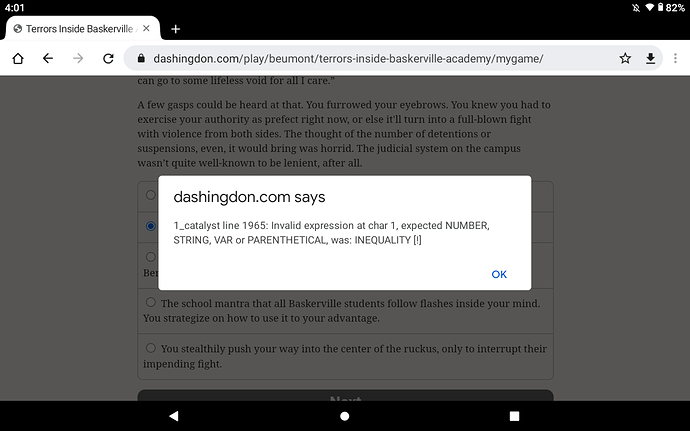 Just fixed that error, thank you for reporting it!

This is a pretty cool idea, and an interesting start. I guess my main issue is the fact that we have to choose how we feel about Barrett before we actually know anything about them?

(Also, it felt weird that there were two choices, and the second one was basically the first one, except with extra “crush” options…

As for the bugs, if you’re using CSIDE, you can run RandomTest, which will find a lot of bugs for you.

Yeah, I agree it’s a bit too early for the player to decide what relationship they can have with Barrett, especially since they’ll be locked out of the ROs once they show romantic interest to them. I’ll try to remedy this problem by having the MC be able to change their opinion in the ROs in Chapter 2 (since something “life-changing” will happen to them).

Also, can I ask about these two choices you’re talking about? In deciding your relationship with them, I decided to lock out of the player from deciding most of the options depending on their reaction to Barrett’s voice and sexuality. So, if you only have 2 choices in your relationship with them, then the choices will be friends/acquaintances/enemies and crush/rivalmance.

Thank you for the advice about the bugs! I’ve heard about RandomTest, but I’ve never tried to learned how to use it yet. I hope this’ll fix my problems since bugs have always been prevalent since the first day release of the demo.

Also, can I ask about these two choices you’re talking about?

I guess my main issue (aside from the fact that it came before I knew who Barrett was and how I actually felt about him) was how the second choice was presented. I don’t think that there’s anything wrong with choosing “how I mainly feel about Barrett” followed by “do I have a crush on him?” and I do like that we can still choose to be crushing on him even if we don’t otherwise like him, but I guess it felt that by leaving the other options in the second choice visible, it let me see options I honestly would rather have picked, but couldn’t choose…

I guess also it felt like the choice I had made didn’t really fit what the game said I felt.

I had chosen the second option (essentially “I like him but now is not the best time”), and then the game had translated it as “I neither like nor dislike him”. And then the second choice rubbed it in, by presenting me with these tantalising options for a best-friend crush or a rivalmance, but not letting me choose them…

If that makes sense?

Yeah, I agree it’s a bit too early for the player to decide what relationship they can have with Barrett, especially since they’ll be locked out of the ROs once they show romantic interest to them. I’ll try to remedy this problem by having the MC be able to change their opinion in the ROs in Chapter 2 (since something “life-changing” will happen to them).

Actually, would it make sense to let people “crush” on multiple ROs in the first chapter?

And then you can just choose one of them to get serious with later on.

Anyway, good luck with the game.

And then the second choice rubbed it in, by presenting me with these tantalising options for a best-friend crush or a rivalmance, but not letting me choose them…

If that makes sense?

Yes, it makes sense! I should make it clearer in the next update of what the choices mean, or maybe I just won’t lock out the player from the choices.

Actually, would it make sense to let people “crush” on multiple ROs in the first chapter?

And then you can just choose one of them to get serious with later on.

Yeah, that seems much better! I’ll change it on the next update.

Anyway, good luck with the game.

I thought about it for a long time, thinking about abandoning it and going my own merry way and not engage with it. And maybe it’s all fine and it’s me who is going out of my way to overreact, idk.
Because “If you don’t like, don’t read it” mentality.
I understand that it is an early WIP and that things may change, but since you didn’t put disclaimer about sexism, racism, xenophobia, i can imagine it is not something you intend to put in the game, at least at this point? Although you already have a choice to be hateful toward the outsiders.
I want to say, i am not an educator. I’m not here to put you on a stake and discourage you from writing, seeing that you said that you are a teenager. I am only one person, with only my experiences, other people may feel different, a lot different from me.
Let me say, that i can’t have surgery or legally change my name in the country that i live, so for me what you are doing, is still much a reality, so i’m talking about from my point of view.
I decided to give your feedback here, because you asked for it here.
Critique usually goes both ways positive and negative, so I will be putting ALL of it under the cut, if you don’t want to read it, because it is all negative, so i want to give a heads up.

All i say, if you want to keep it as it is, add sympathetic NPC or a couple NPCs, with who MC will relate it and don’t force them to hate themselves.

My emotions got better of me and rewriting it again to make it softer i’m afraid it is not something that i can do.
I will delete my post, if mods or other people feel it is too harsh and can be seen as harassment against the author, who is a teenager.

Hello! I’ve read the entirety of your feedback and I now understand that some contents of my game can be interpreted as disrespectful, especially the misgendering. I’m terribly sorry about that! Because of this, I’m making the student characters call the MC by their correct pronouns, although I can’t say the same for the Elders. It just isn’t realistic for the leaders in a cult to be open-minded about gender and sexuality.

You are putting Transgender Gay MC through so much, will there be more content for them then? Or are Cisgender Straight MC will have the same amount, even though they were not forced to go through all that?

Yes, I planned to have more content for non-cis and/or non-straight MCs.

I will say, i am absolutely against you forcing Gay, Transgender MCs hating themselves, if you want to put it in make it optional. I was in these shoes and have people who was in these shoes as young people, not all people will be easily brainwashed, even people who grew up in that environment. It of course had consequences, for people who spoke out. Understandable if MC doesn’t act on it, but internally do not force them.

I will definitely add an option for the self-hate to be optional. In hindsight, it was insensitive of me to not give that choice to players.

Again, I apologize! At first, I didn’t think there was any problem with the misgendering because of the cult setting, but I realize that misgendering a non-cis and/or non-straight MC would be highly uncomfortable and offensive for the player.

EDIT: Updated the changes I talked about in the latest version of the game.

ooooo a new WIP for my mind to feast on, I thank you kind one

on a serious note this WIP is great, already caught my interest seeing as it dealing with a cult setting. I do have to ask if the cult presented in the demo is based of any real life cult incidents? like the Elan Boarding School For Troubled Teens? only blurring this cause I know some people do have a TW for that place

Glad you enjoyed the demo! I’m also blurring the cults I mention. It’s not exactly based solely on one specific real life cult incidents, but I indeed took some inspiration from a few real life cult incidents (like the Jonestown Massacre and even from a local cult near me, though I won’t disclose the name.) I only discovered about Elan Boarding School For Troubled Teens when I was already halfway into writing the first chapter though, and I was even surprised at the time that there was actually a real-life cult boarding school that managed to last a long time.

I was even surprised at the time that there was actually a real-life cult boarding school that managed to last a long time.

yeah scary huh? Who knows if there’s another one just lurkin in the shadows

Also now I’m both curious and mortally scared for the lives of the PC and the rest of the gang, totally can’t wait to see what’s in store!

Okay throughout chapter one I noticed several places where we would be talking or thinking of an RO of one gender. (I.e female) and the next line would say the opposite gender. (I.e male)

Thank you for informing me! I thought I already fixed the pronoun mistakes, but I know now that I have to look over Chapter 1 again.

Hello, everyone! For this month’s update, ‘Chapter 2: The Revelation’ is finally out. This new chapter is 33k+ long.

Besides the new chapter, there were also some new changes:

I hope you enjoy Chapter 2! If there’s a scene where you notice that the MC is acting out of character, the wrong pronouns are being used, or there’s just something wrong, please don’t hesitate to report it.

EDIT: I can’t seem to edit the title of this thread, but I’ll try to remedy this situation later.

shouldn’t the name be sharp’s?

May I ask what choice you made when you were given the choice to decide your relationship with Barrett? I’ve been trying to find the solution to that problem, but as far as I know, that isn’t supposed to happen. Might just be because I didn’t notice something though.