I’ve begun work on my new game which is still unnamed (suggestions are welcome). In it, you play a man from a small clan who will be forced to move to a different and technologicaly more advanced culture. This other culture will have different views about religion, bloodlines and position of women in society. For example in clans ones honour is the most important thing, then comes everything else. Their women are expected to care for the home and the children and their view of sexuality is quite puritan. On the other hand, the culture in which the MC will be forced into has rather hedonistic views of sexuality. In addition to that women there have more freedom, they base value of others by their ability to generate wealth rather than honour.

Currently it’s not even whole first chapter done, but I would like to hear different opinions on my writing as I am not very satisfied with it. I speak several languages so my senteces are sometimes quite wierdly constructed. And no, English is not my first language.

Questions and crticism is welcome. Just don’t expect an answer in the first five minutes as I have other duties to attend to.

Why did I choose to do this if I can’t write well and don’t have a lot of free time? I was always interested in video games (RPGs mostly) and this seemed like a good start before starting a much more complicated project.

I’m uncertain if this is should be under adult or all ages due to cultural differences, if some of you would be as kind to point me in the right direction I would be grateful.

11th day of September month, I have made an update. Demo should now consist of almost I̅X̅ words.
That is 9000 for those who are not familiar with Roman numerals.
I almost forgot, if anyone has any knowledge of programming microcontrollers message me, I have ran into a problem I can’t solve and could use your help.

Example: Some of those bolded lines could have been expressed via dialogue to make the scene more dynamic.

You thank her and go inside. Before eating you make an offering to the ancestors by burning some resin and asking for their blessing of your line. […] As you eat your lunch in silence someone calls your name from outside the cottage. You curse his name and ancestors in your mind and tell your sister to show whoever it is inside. After a moment of hushed conversation you can see Vit entering your cottage. You offer him a seat and a plate at your table as rules of hospitality dictate. He accepts and in certain tone asks the ancestors for the blessing of the host.

I’d like to see how the MC will react to the other culture. Will the sister also move with us, or is she staying with the man she’s marrying? I think it will be interesting to explore the possible contrast between her reaction and that of the MC.

This is from the adult readers group, describing what the forum considers to be adult content. If your game will include said content you should probably make the adult reader version of this thread.

I think you should have some more paragraph breaks. Having one long block of text makes reading a bit difficult. And by a puritan view of sex, do you mean sex is viewed as sinful and only for children? Or is it more like, no sex before marriage?

So you think I should write the actual dialog instead of just writing what was said. Noted!
I am not yet clear on the romance and if it will feature in the game. As I said I’m not much of a writer and I wouldn’t like to make promises which I can’t keep.

There is no such thing as sin in the mind of Redulian as they have no gods, they only honour their ancestors.
Having sex without being married is seen as dishonourable act. If one would take part in it one would be forced to leave the clan. 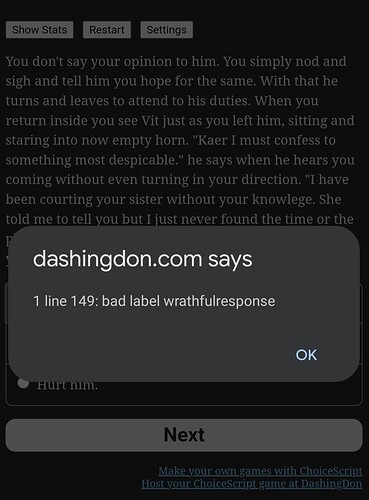 You don’t have to commit to anything with regard to your game. I was mainly asking out of curiosity.

So you think I should write the actual dialog instead of just writing what was said. Noted!

Not in all the cases. Sometimes, it is a better choice just to express what the characters are talking about. For example: Character A gives Character B flowers. If the gesture doesn’t mean anything or isn’t particularly important to the story, it doesn’t hurt to write “They accepted Character A’s flowers with gratitude / with a smile / you-have-it.”

To go with the quote I used above, these would be the sections I’d like you to elaborate on:

Very promising start. Super intrigued to see how this develops, will be following closely.

It has potential. It looks like a paragraph right now a bit of editing should do the trick. Since there was a option of choosing between being a fighter or a hunter it’d be cool if there were different weapons in these roles. Like a hunter being good with using bow,daggers etc and a fighter in hand to hand,sword,spear etc.

It sounds interesting so far. I really like the idea of the character going into a very different culture. I wish it wasn’t gender locked, though. I have a hard time playing these games as someone very different to me. Unless there’s a narrative reason for it being locked, I’d strongly recommend allowing the player to be a woman. I’m not the only one who struggles with this

I like the idea. One of my degrees is in Cultural Anthropology so this is a very interesting premise to me. I do have a few suggestions:

So the mc can disagree with cultures views but will there be any effects if we rebel and disagree?

Another particularity would be to show the advances of both cultures in various aspects of these societies since there is no fixed consensus to designate one culture more advanced than another, for example, indigenous America was more advanced in agriculture than Europe or Spain allowed black slaves to buy his freedom since he divided it there was of clans and socioeconomic status as well as religious and never racial since there was a consensus in the Spanish empire that every man had a soul (native Americans and slaves who had laws that regulated the treatment of their owners reported by Humboldt in his chronicles)

Another particularity would be to show the advances of both cultures in various aspects of these societies since there is no fixed consensus to designate one culture more advanced than another, for example, indigenous America was more advanced in agriculture than Europe or Spain allowed black slaves to buy his freedom since he divided it there was of clans and socioeconomic status as well as religious and never racial since there was a consensus in the Spanish empire that every man had a soul (native Americans and slaves who had laws that regulated the treatment of their owners reported by Humboldt in his chronicles where a woman who mistreated her slaves to the point of injuring them are taken from her by the State as well as granted her freedom) A more paternalistic but never supremacist vision.

I agree. We know the Celts for example were dabbling in advanced surgical techniques, chemistry, and understood a lot about the basic ideas behind infection. They, like the Mayans, could predict celestial phenomenon and solar movement far better than peoples hundreds of years later could with telescopes. Advancement is in many ways subjective.

On the discussion of slavery though it is particular interesting. It would be more so if the author added robots or androids to the futuristic society to serve them. It’d make for a fun internal debate between the two cultures.

found a error in you game when it gives you options of getting angry, attack him or i forgot what the other one is but when you press get angry at him it pops up saying 1 line 149: bad label wrathfulresponse