Should the player be able to die and how should one manage that?

Now if you want some story impact to dying, you have to treat dying as something every player will do at some point so it feels normal. Give some story reason why the MC can return from death. I always loved Shadow of Mordor/War’s respawn logic: the player is possessed by a wraith and is “banished from death.” The player dying has an in-game impact on the story.

What comes to mind for me is the Deathless games, where, due to Craftwork being modern day Necromancy (more or less), it’s entirely within the realm of reason for you to die, shrug, hit the “undo” button and keep going. Hell, that happens as a major part of the plot in the first game (you get punched so hard that your soul shatters and the story leading up to that point is you piecing yourself back together again), and can happen in the second game (I got killed in my dreams by an assassin, but I got so angry about it that I willed myself back to life through the sheer force of how pissed off I was).

CoG don’t publish RPGs, they publish interactive fiction. There is no “gameplay” here besides the story.

I would argue that they have several games that fit into the RPG category. Technically RPGs include table-top games aswell, which several CoG or HG games are based on, so the definition is actually pretty broad. That aside, these are the RPGs I can think of: The Lost Heir series(pretty much the most fundamental example of this), The Great Tournament series, the Vampire the Masquerade games… honestly, now that I think of it, a lot of CoG and HG games fit this definition.

The games that don’t are likely more linear, but in CoG and HG games you are basically REQUIRED to role play. There are some that are definitely sandbox or city/army sims, but most are RPGs on some level.

Yeah you are right, but i meant more Dragon age/Baldurs gate/Wrath of the righteous kinda rpgs.

Hmmm………… So after this very long and insightful discussion. I have concluded that some people think CoG games have to be a certain way. Perhaps CoG isn’t for me. Would be a shame. I’ve put so much time into it. There are in fact many categories of CoG’s. The ones I’ve played are very RPG. Thats what I like. Just wish those games had a more robust story sometimes. Yes, when you cram replay them you clicky clicky and only read the choices until you discover a new thread. I know it seems weird but if I do it others must. Perhaps this is an issue with preference and simply not understanding the variety. Honestly I don’t want my MC to die and probably won’t do it; however, I would never tell anyone that their game isn’t a CoG game because x,y,z. That sounds rather dogmatic and is in contrast to their openness to creativity. At least thats my hope. “Variety is the spice of life.” I think we all can agree on that at least. Thanks everyone for your thoughts. I think this thread has run its course. Back to writing

I’m actually working on a story that has multiple endings based on if you die at a certain chapter amongst other decisions. Right now I’m having a difficult time in trying to make it satisfying enough to not upset the reader if they should trip up early. I think the best way to handle it is to give clear signs that they are screwing up and pushing any further could lead to death. Most people, including myself, don’t enjoy being blindsided because a stat was 1 point too low or because we went against the author’s intended path.

I always saw using death in games as a failure of the imagination. With the exception of well-written end state deaths, they put me off. For me, it’s not tension building, it’s being forced to figure out how the author wants me to play the game. Brings me right out of things.

When it’s a romance game, I really enjoy scenes where the MC dies, if a bad ending is reached, and the PoV switches to the chosen RO for the “epilogue” to that ending - or well, simply for the scenes that directly follow the MC’s death. It’s always very effective drama wise, and oh so rarely used in text-based IF. It’s more of a visual novel thing.

So after this very long and insightful discussion. I have concluded that some people think CoG games have to be a certain way.

I think the truth is that there’s a very wide variety of types of COG and (especially) HG and, as you point out, there are quite a few RPG-style games out there (Lost Heir, the recent Vampire Regent game, a lot of adrao’s games, for example). Stat-heavy RPG type games featuring player death clearly aren’t for everyone, but some people really like them. They definitely have an audience. I wouldn’t be discouraged by this comment thread. Write your game how you want to write it. I think one or two commenters higher up in this thread who don’t enjoy the more RPG-type experiences have written posts which suggest that choicescript games “should” be one thing, which I think is the wrong way to approach this discussion, as it implies that some authors are “doing it wrong”, when they’re not, they’re just doing it differently. Bottom line: if you write an RPG type game and it’s good, it will find an audience.

CoG don’t publish RPGs, they publish interactive fiction. There is no “gameplay” here besides the story. I personally won’t reread a chapter just to get to the same point,

That’s not technically true. You can publish whatever you want through HG as long as it meets COG’s requirements (which are minimal for HG ie: Not offensive, min word limit, passes tests, not plagerized etc.)

You can write a game that is heavily RNG influenced as if you were playing with dice (I have one in progress myself). How it is received is another matter as we don’t have anything quite like it published.

Hmmm………… So after this very long and insightful discussion. I have concluded that some people think CoG games have to be a certain way. Perhaps CoG isn’t for me. Would be a shame. I’ve put so much time into it.

You can still write it. Would be a shame to let all that work go to waste. If you’re happy to trial it and see how it’s received go for it. If you want more of a sure fire good seller write a long superhero + romance relatively linear IF. Depends on what you want to get out of it and how much risk you’re willing to take. (Is this more for enjoyment or do you have to have as much funds from this project as possible to support yourself.)

Edit: BTW as mentioned by @Shliemannsghost adrao’s Hero or Villain series does blur the lines a bit between traditional IF and gameplay. I’d recommend looking at his work if you plan to go ahead with this for some inspiration. He tends to have difficulty sliders and reset points so people can set the potential for dying in the game to their taste and it doesn’t necessarily require a restart from the beginning if you lose a battle.

I think you have to make a save system or at least a checkpoint. Dying make the story more dramatic but restart again and again…

it doesn’t necessarily require a restart from the beginning if you lose a battle.

I do something like this in my own game, Relics of the Lost Age. If your health gets to 0 in that game, you will “die”, but if that happens, it gives you the option to just go back a few choices and try a different approach, or (in an upcoming update which I’ve sent to HG but hasn’t been pushed yet), to go back to the start of the current chapter. That way, you get the excitement of knowing that you can die, but in practice it’s not a heavy penalty that’s going to require you to re-read through 300,000 words to get to the same point and try again! I think of it as the “death-lite” approach.

I think of it as the “death-lite” approach.

I think that’s a good compromise for games where you want to give the player the opportunity to fail, but not have to restart the whole game. I’m unually fine with in game deaths as long as I don’t have to restart from the beginning of long games to fix it.

How about this, the player making a deal with a god or some other being in order to come back to life. 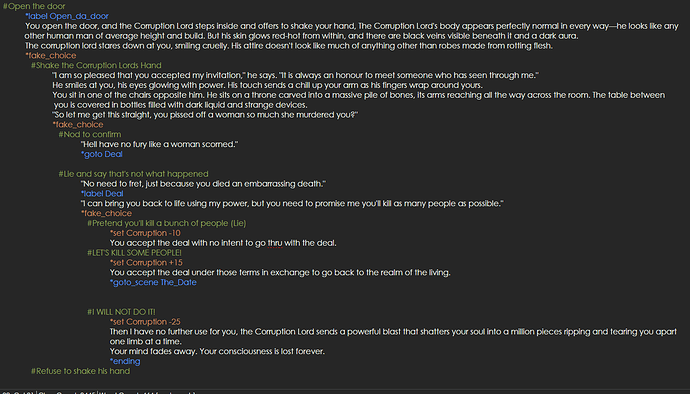 And yes, that is my WIP, and no a demo hasn’t been released yet

Yes I do appreciate being able to die in most games, when it is for any reason other than rail roading. I appreciate the challenge of not getting killed, and the sadness of dying. Whether it was preventable from a bad choice, or an inevitability at the end. It is quite emotional (if it isn’t botched.) Even something like the Paranoia RPG where death is supposed to be funny.

Perhaps you could even have your replacement MC, avenge the other one.

I do agree however that if one arbitrary choice shouldn’t kill you. That however is a problem with being arbitrary, and not death like others seem to believe.

I don’t know, maybe it’s a hot take, but I like the option of a character having the option to die in a really critical situation, like a bad ending situation. I wouldn’t randomly make it happen or not make it clear through a few choices that they’re maybe making bad choices, but I like the idea of really big bold choices like that.

MC shouldn’t die before the game is actually over, it just doesn’t add anything to the story except to punish the player for bad choices, if they make “bad choices” it should have bad consequences, slapping a game over is just lazy design

In the best case scenario the player will sigh and start over to pick a different choice, which is a waste of time since there’s no gameplay to speak off, in the worst case you will totally alienate the player, why should they pick a choice they don’t agree with to game the system just to progress the story?

I can’t help but feel like it’s a design choice that carried over from video games that just doesn’t work in most interactive fiction, I certainly don’t appreciate them.

How about if the player dies, they have to make a deal with an evil god/entity to come back to life, and if they refuse the deal, they stay dead? Would that change your opinion?

No, that just sounds like game over with extra steps, nothing really changes except it’s a way for player to take the deal for story reasons.

If it makes sense for the story, sure. But that doesn’t mean there should be little dead ends everywhere. For the most part, a main character death should feel not like a failure state, but a logical end to the story. Obviously not a happy end, but a meaningful one that flows naturally from the character’s choices and brings the narrative arc to a close. The player should feel motivated to play again and explore a different path, rather than simply feeling cheated.

Like what if the player attempts to kill another character and fails and dies. (Entirely the players choice)