I learned something new today

I always use a custom name, but I like for. Some lists to be there to give me an idea of what names would fit in the world

You can view the code on COG (only the demo if you haven’t bought it) by changing the end of the site name to scenes/startup.txt

From there you can see all the names of the other scenes and navigate accordingly.

Also, do people ever use the game’s pre-given names for their MC, or do they always type in their own?

Oh I don’t think I’ve ever used any other name other than my own. Even if it sounds totally out of place I still use my own. I always thought that’s the point of CYOA anyways.

Huh, very interesting! I didn’t know there were so many different ways to look at a game’s code, thanks everybody!

On a different note, anyone feel like naming the Shepherds’ talking gargoyle guardian thing? I can’t for the life of me think of a name that sounds right. Things to note:

On a different note, anyone feel like naming the Shepherds’ talking gargoyle guardian thing?

On a different note, anyone feel like naming the Shepherds’ talking gargoyle guardian thing? I can’t for the life of me think of a name that sounds right.

Leon, Leo, Leondre, Leonel - just a play on the description

I’m torn between Jekka and Vivek at the moment–Leo et al seems too noble for the creature and Steve is, well, Steve!

Hmm… Perhaps make a poll with the “Other” option for other suggestions. =D

But on a serious note, maybe Cornellis?
What kind of annoying are we talking here? Sassy? Haughty? Indignant? Belligerent?

If it’s a haughty gargoyle, I definitely like Cornellis

On a different note, anyone feel like naming the Shepherds’ talking gargoyle guardian thing? I can’t for the life of me think of a name that sounds right. Things to note:

How about Griphook? Though is this name copyrighted? =/ 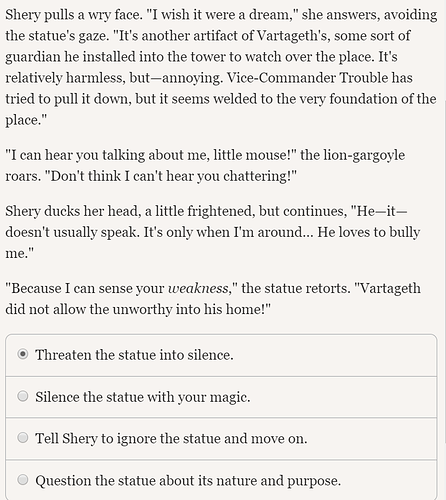 @Logan3000x I like all of those names! They seem Russian in origin, which may seem improbable in Blest, but Vasile and Ioan are not noticeably so? @resuri08 I don’t believe Griphook is copyrighted, but I would want to avoid using it to avoid any confusion anyway.

Here’s a poll for Shery’s tormentor:

or maybe keep it simple, have everyone just call it Ugly (as a name, not just a description).

Of the options, I like Jekka the best, because it sounds the closest to jerk, lol
I am a simple woman with simple humor.

I really like Vivek but… idk, I feel like it’d be cooler if there was a silly meaning behind it. Vivek is of Sanskrit origin and means wisdom according to my quick Google search. If the gargoyle’s name meant something undignified the character could use this to laugh the Gargoyle into submission. Wreck his self esteem to stop him from bullying Shery

A lot of things have changed with my book (writer’s block, impending deadlines, and a necessary rewrite, to name a few) so I’m putting Haven and Hael on hiatus for the foreseeable future. I just didn’t want to vanish without a trace and leave everyone wondering if this was sent to the WIP graveyard. (It wasn’t!) You will see Haven again: I’m determined to make this project happen and bring the Shepherds to life! This series has been my baby for many years, so it won’t be abandoned. It will just take a while to get there.

Thank you for your patience! I will return when my book is on its way to publication and I can take up the threads of Haven again!

@rinari contact a moderator or leader when you are ready to reopen the thread.

Good luck in getting everything else situated quickly.

This is still technically on hiatus since I’m still finishing the book (almost there!), but I found myself with some free time this week and drew up some rudimentary maps (and also finished all of Tallys’ route in the Equalists’ chapter + almost all of Trouble’s route, lol. Unexpectedly, Croelle is now a part of Tallys’ path if you choose to follow her!). These maps are temporary because if the game ever gets published, I don’t want to pay 25$ a month in licensing fees to use them…

So I’ll have to find someone who can, like, trace them someday lol but for now I think they’ll do!

Here is a map of all of Blest: 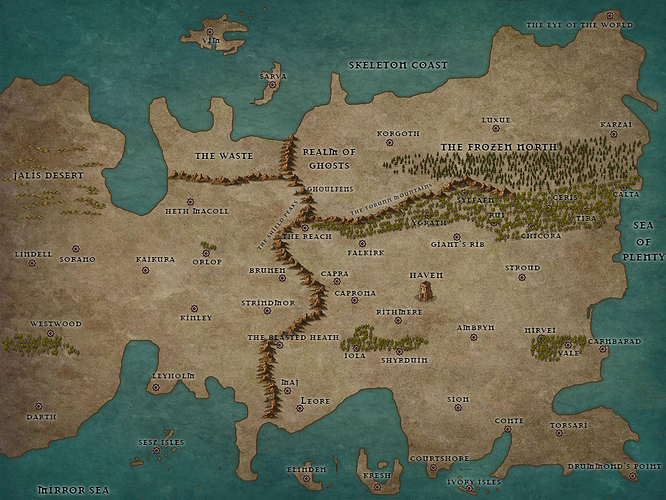 Here is a map of most of the locations the MC/Shepherds will travel to throughout the course of the game: 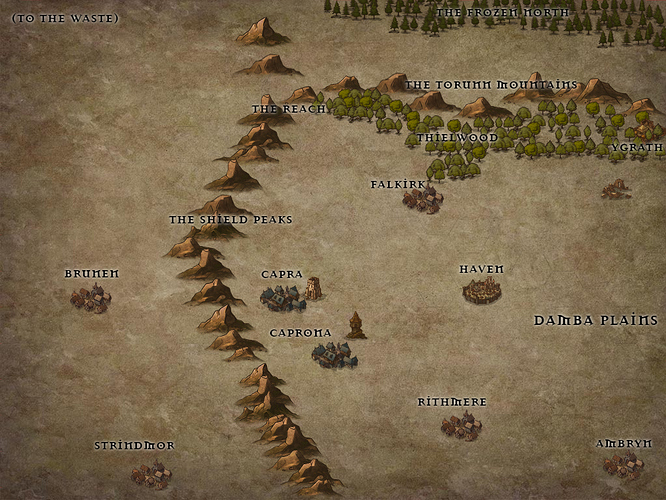 (Prihine comes from Brunen, so that’s where the caravan started. It takes 2-3 weeks to get from Brunen to Haven.)

And finally, here’s a really shitty map of Haven’s districts LOL. There’s a tourist’s book in the game’s codex explaining each area in more detail. 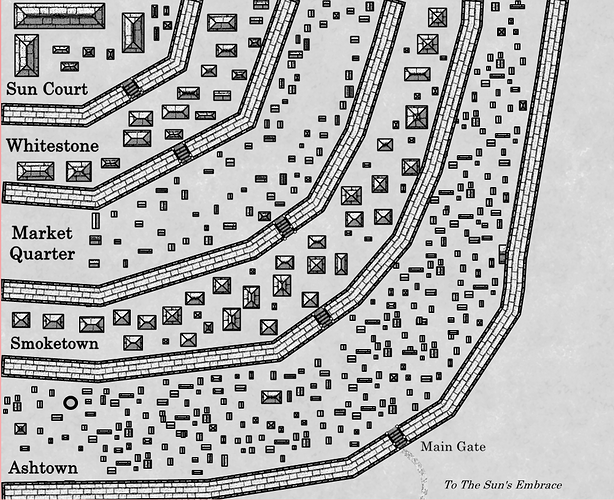 Essentially, Ashtown (or Witchtown) is where the Shepherds and most of the city’s Diminished reside. Smoketown is a warehouse district full of factories, manufacturing facilities, and poorer homes. Market Quarter is where the city’s market is (obviously), as well as middle-class merchants and craftsmen. Whitestone is a neighborhood full of mansions for noble families and those favored by the Autarch (Prihine lives here). And the Sun Court is where the houses of government and the Autarch reside.

I made these maps using Inkarnate and a program that’s pretty much like Paint!

Edit: Oh, and the name of the game changed! I like Shepherds of Haven better, though if you feel strongly about it, I’d love to hear thoughts!

Very cool! Just me being random but I notice there are no lakes or rivers depicted in this map. Something was throwing me off and I kept staring wondering what was bothering me. Haha

Really like this though helps a lot. I hope you will let us know when your book is finished. Good Luck!