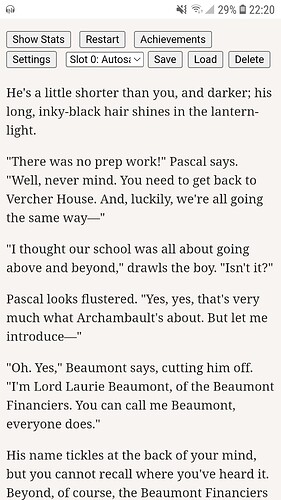 Thanks for spotting that! Must be a holdover from before I added the MC height choice. I’ll fix!

Also i want to ask if the demo is going to be updated or is it finished?

I may put Chapter 7 up publicly before beta testing, but it depends a lot on my schedule this week! If I do, it’ll probably go up in the next few days.

I already posted this on Patreon (plus an extra spoiler about something special you can do in the late game…), and so, to spread the word wider: I have one (1) functional draft of Royal Affairs written!

Currently it’s at 323000 words total and 69000 words playthrough - the longest playthrough of any of my CoGs! Both are going to climb during edits and beta, so I’ll be very interested to see where it lands…

Next up is circling round and starting on the big batch of edits from the document I mentioned above. Then it’ll go to my editor, and THEN once I’ve done revisions based on her feedback, it’ll be time for the full beta test. Whew!

I spent the day after posting the above busy doing edits; when I’m done I’ll post a list for those interested. But before I do that here’s a tale of woe: when balancing my stats I discovered that in one chapter, one of the stats is currently tested four times as many times as the least common stat, making it 4x more powerful. I’d been more judicious about earlier chapters, and throughout I’ve been careful to balance how hard it is to reach high scores, but there’s no use having a high score if you can’t use it in choices.

RIP Appealing and Authoritative. These edits are going to cut them down to size.

Moral of the story: don’t end up like me, track how many times you’re testing stats before you have a full first draft!

No, not my Appealing and Authoritative! The character I’ve been using has those as his highest stats, with Eloquent a distant third.

Maybe that explains why things seem pretty easy for him, though.

RIP Appealing and Authoritative. These edits are going to cut them down to size.

Never used authoritative much for my prince mc, appealing is one of his core stats though, together with entertaining and underhanded.

Yeah, Appealing has ended up outstripping all the others through the chapters in terms of power level, with Authoritative fairly close behind. I’m really pleased I spotted it! It’s a bit of work now which will mean I can focus elsewhere during beta. Plus it’ll make sure I’m covering more tonal bases for MC personality.

As long as my “Princess Grace” character can function, everything will be awesome.

Thanks for sharing your pearls of wisdom; much appreciated.

My character was more about being social and open, that entertaining stat being the core of his personality but the appealing one was also up there in use, so mine will get a hard reset for the next demo/beta testing/final game.