It really is a challenge for me to stop coming back to them in other ROs’ playthrough (childhood friends to lovers and bodyguard crush are my biggest kyrptonite it seems).

I noticed something, though. When I pick options that would make people more at ease with Asher (involved them more in conversations or entertained them) I got this;

meanwhile, when I chose the opposite;

I feel like the reaction is reversed? Or was it intentional?

Thank you so much for the lovely comments, I’m so glad you’re enjoying! That does look like I inadvertently swapped - I’ll have a look and get that fixed for the next update.

So sorry I left this for such a while - I saw it when you first posted and then completely missed it. Thank you very much for your thoughts!

Citizen Popularity represents how the average Westerlind citizen feels about the main character. Royal Popularity represents how the royal family and household feels about them - so your mother, Fabien, Josiane, Oliver, and Asher’s parents plus any extended family. So you could end up being very popular with the ordinary people, but not popular with your family - or the other way around - for various reasons.

The characters’ opposed stats are aspects of themselves that will shift in different directions through the course of the game. They can also end up in different situations depending on the plot, but how they respond and their attitude/manner/personality may be affected by these stats.

Javi’s Dutiful/Individualistic represents their attitude towards their responsibilities and family pressures - they can vary on how much of their individuality they’re willing to sacrifice for their royal duties.

Dominique’s Dependent/Determined represents how much drive they have, and how much they’re willing to act for themselves rather than relying on others.

Asher’s Bold/Diffident represents how much they’ll stand up for themselves and speak up. High Diffident means that they will be quieter, less likely to buck tradition or pressure, and will keep their head down.

Hyacinthe’s Technical/Instinctive represents how much they listen to their gut feeling vs relying on technique and strategy - whether that’s about their dance style or how they deal with social situations.

Trevelyan’s against the system/within the sytem refers to their activism and place in politics - whether they are in a place of rejecting the system or wanting to try to work within it to make it better.

Beaumont’s Nostalgic/Forward-Looking trait represents how they feel about their past and how they relate to the future - will they move ahead and potentially reject some aspects they’ve been holding onto, or keep them in their mind?

Thank you for your patience in waiting for this reply!

OMG, you skipped best girl Beaumont, HOW COULD YOU?!

(as a side note, I have no idea why Beaumont’s meter has been moving the way it has in my playthrough, but it’s going in the exact opposite direction I wanted it to)

Oh my word! I swear no matter how many or few characters I have, I always forget at least one when I’m listing them like that

I’ll be having a close look at those stats and their changes once I’ve got the full draft in hand, as well as whether I end up having them visible. As discussed on the Noblesse Oblige thread, I decided to hide them there - I think they have more of a place here as they’re a bit more readable by the player character, but I might change my mind down the line.

Yeah it has been a long time since I submitted that post but thank you so much for remembering,really felt lost at the many variations and stats relating to characters/overall setting.

Excuse me but you forgotten to put a space at the highlighted part.

Thank you! That’ll be fixed in the next update.

Here’s a question-- where do all of these adoptable babies come from? Surrogates? Scandalous dalliances between classes? Given how classist Westerlin is, I wouldn’t be surprised if lower class parents were often persuaded to give up their children to upper class nobles or business people in hopes that the kids will be able to, yknow, vote and have a say in society.

Side question-- maybe I should ask this on the blog-- but neither Westerlin or Zaledo seem to be heteronormative, however both societies (esp. Westerlin as far as we know) seem to put a lot of emphasis on social mobility through strategic marriage. Is asexuality/aromanticism stigmatized in that context, given the emphasis on marrying well for the sake of your family? Gonzalez certainly seemed nervous about telling their parents that they weren’t really into dating, which makes sense if the way you’re expected to succeed in the world is by forming a decent marriage contract. (Though on the other hand, a lot of times marriage in past/present had nothing to do with romance, so ymmv)

This is a fine place to ask! I’m actually more likely to answer in good time here, because I have a ridiculous inbox backlog at the moment and I’m more likely to dip in and check here.

Is asexuality/aromanticism stigmatized in that context, given the emphasis on marrying well for the sake of your family? Gonzalez certainly seemed nervous about telling their parents that they weren’t really into dating, which makes sense if the way you’re expected to succeed in the world is by forming a decent marriage contract. (Though on the other hand, a lot of times marriage in past/present had nothing to do with romance, so ymmv)

I think it’s not necessarily directly stigmatised, but is seen as unusual and there’s unspoken/implicit pressure from Westerlind social norms. Some of Gonzalez’s nerves reflect that, and also just they don’t want to have to talk directly about that kind of thing to their parents. Marriages without physical intimacy and/or romance are pretty common especially in upper-class Westerlind families where there’s a lot more jockeying for alliances between families, etc. But there’s less cultural understanding/enforcement that someone might want that for themselves for its own sake, not for strategic reasons.

Oh, btw-- in the scene where we talk to Trevelyan while on the field trip, we can choose to leave Asher behind and speak with Trevelyan alone, but Asher still pops up in that scene and it seems to be a glitch. 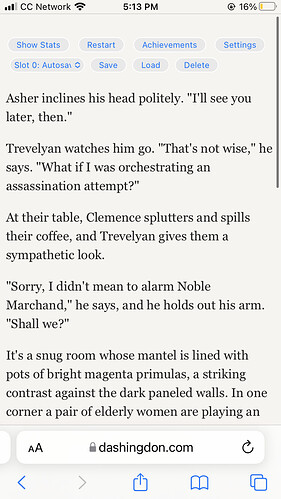 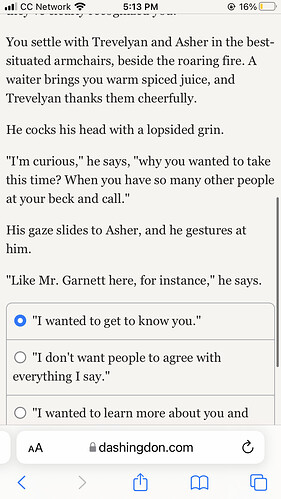 Huh. I have to say, the stats of the choices here are much friendlier than the first game’s. I didn’t have to worry about failing and losing points that much, and it’s a bit more obvious which choices aligns with your character’s personality and skills. The less amount of choices also made the game more enjoyable. I love the overall improvement.

Still, among the IFs I played, this game and the previous one are prolly the only ones that made me feel torn between two ROs (no poly, sadge)

Thank you so much, I’m really glad! I’ve generally tried to nudge the difficulty to be a bit easier than Creme, and also aimed to make it clearer what the choices are testing, so I’m glad that worked for you. And that’s very exciting that you’re torn between romances, that’s a great compliment!

@Tuunetoon thank you for spotting that error! I’ll take a look and get that fixed.

Now that the Noblesse Oblige beta is in the bag, I’m back on the Royal Affairs horse in earnest. I’m currently partway through writing Chapter 9, and here is a teaser update!

The big thing here is that you can play the first half of Chapter 5, and there are some smaller expansions earlier on, especially to do with Trevelyan and how their role is shifting in their out-of-school activities.

This update may not play ball with previous save slots. I’m afraid I’m not completely sure. So please feel free to use your save slots but some variables may have changed or been added since your save file was made. If you run into an error, especially if a popup comes up meaning that you can’t progress, please let me know whether you’re running from a save slot.

I hope you enjoy!

Now let’s see if I got it right. Creme de la Creme is first in the series, Royal Affairs is a direct sequel, and Noblesse Oblige takes place in the same world, but it’s a stand alone.

Royal Affairs and Noblesse Oblige are both standalone sequels and all can be played independently of each other!

Noblesse Oblige is set a couple of years after Creme de la Creme, and Royal Affairs is 2-3 years after that. All have different player characters.

Royal Affairs has a more direct connection to Creme de la Creme, as some characters reappear. But you don’t have to have played Creme to play and understand what’s going on - I’ve been careful not to lean too heavily on Creme events in it so that everyone can enjoy it.

your bodyguard, a traditional, eager to please person who thrives on duty, and whose family traditionally serve the Crown as guards. Asher is your age, and you’ve known them since you were a pre teen

I’m so ready to marry him

Curious. Do we already have the Myers-Briggs personality of each RO?

I took tests for the main characters a while back and these are the results:

Whelp I am…pleasantly surprised how much I liked this!
I went into this expecting the same thing as creme de la creme, having to constantly think “what would actually improve my relationship” instead of just being a character and letting that form from their actions (looking at you Freddie, tell you to be yourself and loose relationship points ugh)

But no, I could just have him be a nice charming dude and it happened much more naturally. Loved this book, can’t wait to see the full thing!!