Hi all, thanks for the tips and for sharing your code. The script command opens a whole new realm of possibilities. Here is the updated maze, with better layout and interactivity!

Missing Wings seems very nice. I just started. The only mini-game I found so far is Nice Dice, which is a very simple comparison of two random numbers. Do they also have a full maze in it? I’d be curious to see it.

PS what is a “managing sim”?

I’m not sure timing choices is a good idea in this case.

Whohoo, it worked for me this time! Really REALLY cool to see what can be done with this.

Managing simulator refers to a genre that focuses on production, management, and efficiency. Games like Factorio, Cookie Clicker (this one leans more on idle-clicker), Automation Empire, Rimworld (this one is more on the survival), and recent EAccess Satisfactory (play with me I’m lonely anti-social weeb).

Btw, the timer seems inconsistent. I get a series of rapid brrt on my movement; can’t even click on my preferred option.

My favourite ‘Look at what ChoiceScript can do’ game has to be Lunchtime at St. Expeditus by @aetheria (although I don’t believe they’re active anymore). It basically turns the CS interpreter into something more akin to a Visual Novel. 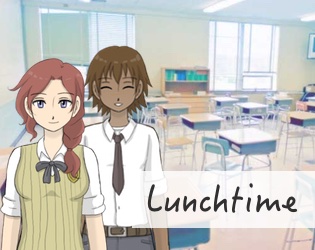 But I think @cup_half_empty has the right of it:

I finally abandoned it because it was too pretentious and I got overwhelmed.

You have to stop and ask yourself, why am I using ChoiceScript? If I’m spending more time writing Python utilities, or hacking around ChoiceScript’s interpreter, than I am writing my game. What’s the point? You may as well go and code your own engine/interpreter.

Note that I’m not trying to dissuade people from experimenting. I’m just encouraging people to be realistic, and I’m speaking from experience… Some of the stuff I’ve left by the wayside:

And, here’s the kicker: I have 0 released games to show for it

This looks pretty cool, though.

Hi all. Thanks so much for your comments - it’s really nice to get so much feedback right on my first post!

@CJW ‘Lunchtime’ is really beautiful, but I believe the core CS engine was heavily modified, right? I don’t think you can do all that stuff right out of the box. Mine is a just a fun challenge - what can be done without hacking the engine?

So, here is the updated version of my maze. (LINK IN THE FIRST POST)

I am using a few script commands, which are in a sense modifications to the engine, but they are very limited.

There are a million ways one could improve it, but it would go beyond the proof of concept.

Let me have your thoughts.

@Szaal I’ve spent some time on Missing Wings. Really nice! I loved the puzzles. I also found the maze. I can’t tell if it’s randomized every time, but it was fun to chase all the warping tiles to the end.

The puzzles are p good, though I think a few of them aren’t balanced properly; the dwarves pairing ones especially starts to feel like a chore once you know the solution to them (thanks to how CS handles interface as well).

I see your point. I started the bone collecting game… do I really have to click “collect” a thousand times?

Anyway, I realized that the game files are served in clear. It’s really interesting to see how things are done behind the scenes.

Hi all. I have updated the maze, link on my first post: Randomized maze - now with graphical map!

Let me have your thoughts!

Ok, I added REAL GRAPHICS!! The map is graphical and changes every time. 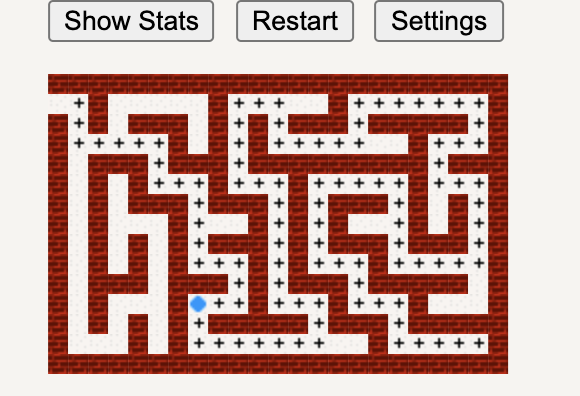 It’s still pure Choicescript (with some *script), and self-contained (no calls to external graphic renderer). Have fun!

Hi, What you’ve done its amazing!
I have created a really small maze for my game (though i could have done it a lot bigger if I wanted) a long time ago but it has no graphics. I just wanted to know if there’s a possibility to make the whole image dark and only show “light” where the player is, and a grayed out where it has been, as a way of not knowing the path to the exit before start. That’s how my maze works, as the player never have been there and it shouldn’t know it (at least not before the first playtough, which it could also be solved by the randomness of yours).

Yes, I believe it’s doable. I’d be happy to help you with your game. Do you want to share a link? Feel free to send me a private message if you prefer.

@Loudbeat I updated the maze with your idea. Is this what you had in mind? 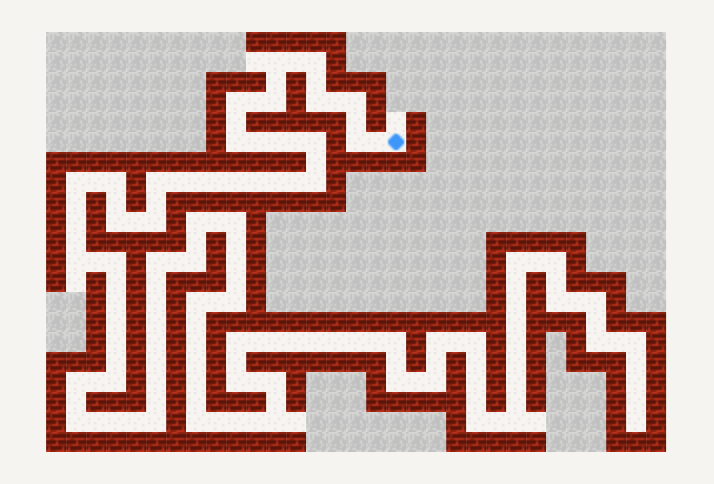 Yes! That’s exactly what I meant, and you even make it look easy to do!

I really appreciate your seemly effortless help, and I would love to implement that on my game (if that’s okay and possible to make a full game to publish with HG), but I have another parameters that form part of the story so I’ll have to see if it’s even possible to merge it with that system. Anyways, problems aside, Thanks a lot for your contribution.

Sorry, I’d just read that and those are kind of the parameters that my small maze has, one hidden “treasure” you could bump into, and one enemy that hunts you, though I have a timing system and some directions that tell you if the enemy is close and the possibility to do something about that to gain more time depending on another parameter. 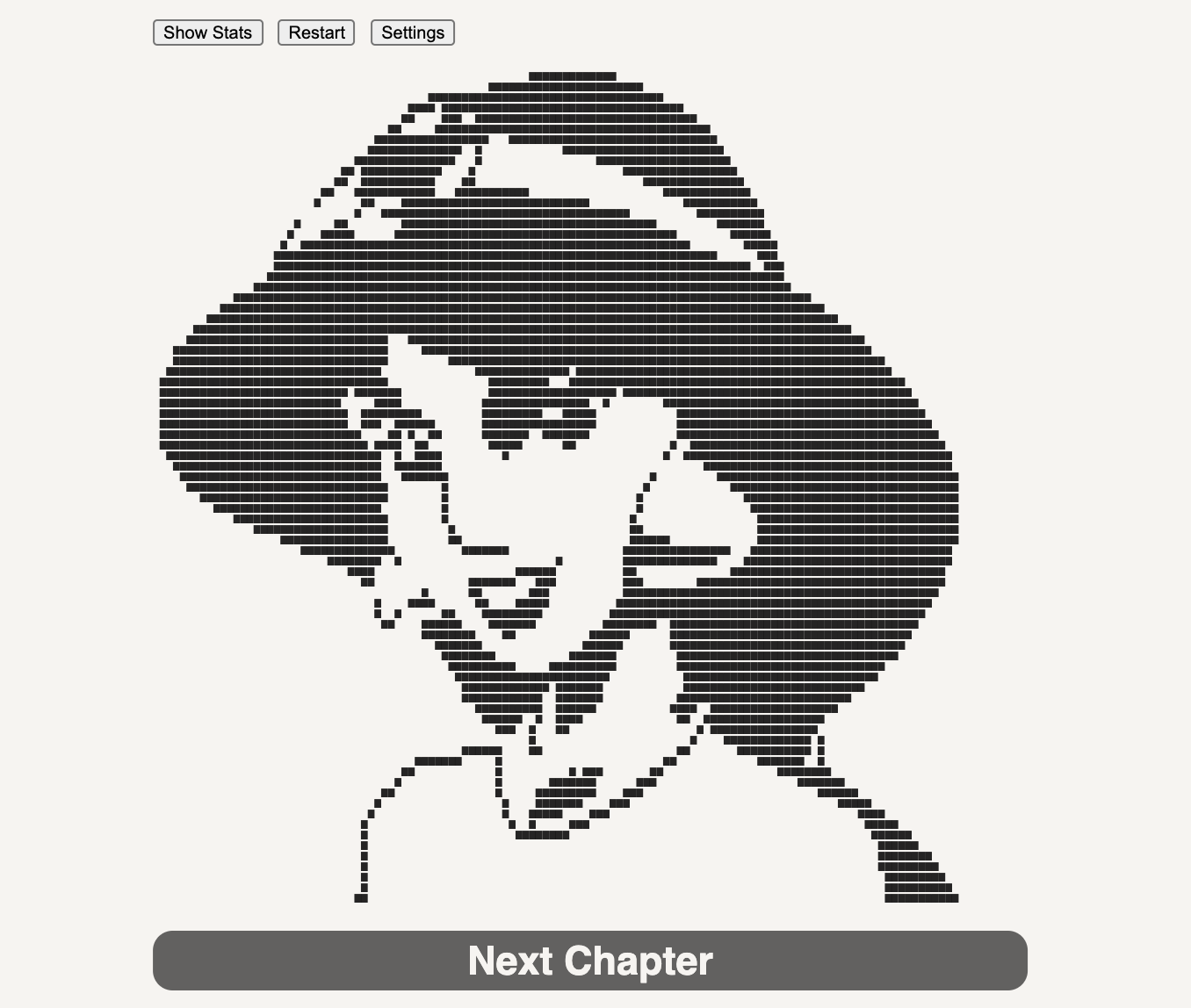 Random feedback. I think for the sake of reader experience in a real game application, reader input into their choice visuals would be helpful. So…

I’d start the game with a reader choice that says something like:

In a published game, this would cut the slightly ugly list of irrelevant reminders, to a shorter, prettier list of relevant reminders.
(And as I briefly mentioned above, if you can extend this fantastic, amazing, genius functionality you are experimenting with to mobiles in a published game - this feature would go from ‘bloody interesting’ to ‘game-changing’ in my very humble estimations)

I like the idea of a touch interface. I implemented it for the 3D maze here: Two-player 3D game demo: The Dungeon of Lamurloq (first-person POV dungeon crawler)

The picture of the maze is touchable: middle for forward, left / right to turn left/right.
Note that, on small mobile phones, you may have to choose “Desktop mode” to get the correct layout (*)

It’s also possible to adjust the labels as you suggest. I tried with multi-replace but it was becoming a chore… and my kid kept asking random questions about Choicescript, I had to cut it short.

(*) Yes, the images could be all scaled down with heavy *script-ing, if one really wanted.