Welcome to Prosperity Station! You are one of the lucky few to have won the lottery to get a chance to live in Prosperity’s grand residential halls. Over two billion people entered the lottery and you are one of only fifty to win. So congratulations and welcome!

Hello there and welcome to the WIP of Prosperity Station! So, what is it all about?

Prosperity Station is a standalone sci-fi horror interactive novel. You play as a brand new resident of the famous Prosperity Station. You think life is going to be great and easy on the station, but then you start to pick up hints that something more sinister is going on. All is not as it seems on Prosperity and it seems that evil things lurk in the shadows…things with claws and many teeth.

Prosperity Station is a big project. With two almost entirely different routes you can take, I estimate that in the end it will easily be over one million words, with over 150k words per playthrough. I won’t lie, it’s probably going to take me a few years to complete it. I promise though, on my heart of hearts, I will never give up on this project. Prosperity Station is my baby, and I will see it through to completion.

The demo currently consists of the first chapter and is 47k in total and around 13k words per average play through.

Check out the Tumblr for progress updates, sneak peaks and to ask me any questions you may have! - https://prosperity-station.tumblr.com/

looks good, i’ll play it, Passion for making demos, . don’t give up easily. thanks for this demo

Well, I’m definitely creeped out. And I also have some theories about why Riley doesn’t like Silas and who that person is.

I’m definitely keeping an eye on this.

Just a question. Would it be possible to have options of what we do after meeting that person? I, for one, would never just go back to sleep. To me, that’s like saying “Yeah, I’m cool here. You can use me as a landing cushion whenever you want to come back, you spooky person you”.

I really enjoyed your demo. Of course I was immediately attracted to the potentially villainous person, which is completely on brand for me.

Do you have any more information on the station design that’s not spoiler-y? Are they generating artificial gravity by spinning the whole thing? I’m not really versed in the real world theory, but that’s my surface level understanding of how we might do that. And in turn, the artificial gravity hopefully mitigates some of the health effects of living in space.

Looking forward to finding out more about what’s going on with my character’s new home and friends.

Very interesting demo, it’s giving me space station 13 vibes. The only thing that bothered me is how shy the MC is at the beginning. Sure, they have Brave/Timid personality bar but it seems like they start with Timid and there’s no choice to play it more confidently.

These three dialogue options all just say the same thing: I’m nervous, as opposed to say, excited or interested. Maybe we could choose a default personality at character creation? That’s just a suggestion

Only the first page and I’m already confused… what does I am a hfiefhei. mean?

@Bokeh You’ll definitely be finding out more about Silas, Riley and the mysterious person in coming chapters!

And yeah haha, that’s a good point actually. I did think about adding an option to stay awake, but just thought against it for some reason, but I will add that as an option now though!

@furyleika I’m very glad you enjoyed! And, If I’m honest here, I need to do more research on how I want Prosperity to function as an actual station. I’ve left it all very vague for the time being as I’m not sure if I want to make it feel real and give a proper scientific explanation to how it all works, or go with the more fantasy side of it and just be like ‘artificial gravity is a thing’.

I do want to make it feel as real as possible though without being too scientific with it, so it’s something I’ll have to think about more.

@Mango_Pirate Ah yes, that is definitely something I’ll add. I could have sworn I added in an ‘I’m excited’ option, but I must have accidently deleted it or not coded it in. I want to avoid having the reader select a personality at the start, as I want to make it all feel as natural possible. I want people to be able to build their character’s personality up as they go.

But I will definitely add some different options here. Thank you for pointing that out!

@geldar Ah, that’s embarrassing, I don’t know how that slipped by me haha! My cat must have walked over my keyboard at the last second. It has been removed now, thank you for pointing that out!

I wanna kill Silas he’s so annoying lol. Other than that really like everything so far. One thing though is maybe have us interact with Riley earlier before we get the choice to call her, cause we don’t even have a conversation with her, at least I didn’t.

Oh, don’t worry, you’ll have plenty of opportunities to take your rage out on Silas, if you so wish!

And I will have a look into adding a least some sort of personal interaction with Riley before you can call her.

Well, here’s the conflict I have:

Virgil is sexy, but too bubbly and jokey for me. Silas is not attractive, but his personality matches mine. On that note, why does the MC hate Silas so much…? I don’t seem to even get a choice in the matter. I just do. And it’s not explained why.

I completely get that and support handwaving it away if it doesn’t add to your story. I just wanted to ask in case you already had decided those things.

Great demo! The is a tiny error though 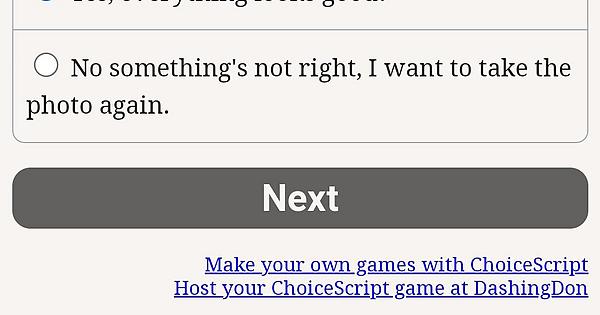 It should be “whose”, “who’s” is the shortened form of who is/who has, while “whose” is the possessive form of who, hope this help

“This is the first time Shpooky has posted — let’s welcome them to our community!”

LESSEE WHAT YOU GOT!

Amazing, I’m one page in and I’m already suspicious of this entire setup. “You must never remove the bracelet”.

I guess Big Brother couldn’t Big Brother properly if it didn’t have a way to know my location at all times.

Oh, there’s an in situ corporate lab doing unknown research? I’m sure it’s all above board and nothing untowards will come of it. Btw, I found a group photo of the characters:

Apparently, MC has gone to space but has never in their life watched a movie: “it’s probably nothing, just some random lab worker you’ll likely never see again.” THIS IS THE SORT OF THING THAT GETS WRITTEN ON TOMBSTONES AS FAMOUS LAST WORDS, YOU TWIT!

I think that sentence about rent and bills could use a rework, if for no other reason that you DO have bills (like food), and I think you meant utilities there. May I suggestttttt… “Thankfully, as a lottery winner, your rent and utilities are waived for as long as you live aboard the station.”?

Oh, my room happens to be beyond the curve and out of sight of the main group? How… convenient. narrows eyes suspiciously

“soar through the air”

“Is there a crazy murderer on board?”

@geldar Hmm yeah, unfortunately there’s always going to be characters that people don’t get on with or find unattractive for one reason or another. Especially since the ROs are gender-locked, this is something that’s unfortunately unavoidable. I did think about making the ROs gender-variable but decided against it since, while romance is a part of the story, it’s not the main focus and I wanted the characters as they are now to come first.

I can understand how Virgil’s personality might be annoying for some, but once the events of the story start to get more serious, Virgil too will become less jokey and more serious to fit.

As for Silas, at first the MC doesn’t like him simply because they get a strange feeling from him with him watching them and then constantly being around the MC. You are given options to favor Silas a bit more, but perhaps I’ll play around with the MC’s interactions with Silas a bit more

@Punn Ah yes, thank you for pointing that out! I will fix it shortly!

@JBento Haha this gave me a good laugh! Yeah, I would say that group picture is accurate for no real reasons in particular…

Thank you for the feedback, I will look into reworking / fixing the parts you mentioned.

But anyway, This whole thing has got my full attention, I need to know more about Mon

Glad you’re intrested so far! You’ll be finding out a lot more about Mon in the coming chapters!

Quick post to say I’ve updated chapter one a little bit with some of the incredibly helpful feedback I’ve already received!

The feedback so far has been so incredibly helpful, so thank you to everyone who’s played and helped out so far!

Dude whats up with Silas? This guy keeps annoying me lol, Silas youre giving me mixed signals and im definitely not enjoying it