That’d be highly advisable yes…Which reminds me I should add a few Significant deaths along the way. You never know which choice will lead to your death. To make it more interesting, There will be no save point, i’ll have to come up with a dice roll program from some of the scenes but oh the fun i’m gonna have writing all this.

If you’re going to go the dice Route. Ahem. *Draws Pentagram in the blood of a beloved character than lays a copy of Watchdogs in The center * Arise @MichaelMaxwell Arise and Advise!

but oh the fun i’m gonna have writing all this.

It’s fun to write something, it’s not so fun when you realize you have so much to write in so little time…

Oh also, @Classified why is your Discord not letting me send you messages?

If you’re going to go the dice Route. Ahem. *Draws Pentagram in the blood of a beloved character than lays a copy of Watchdogs in The center * Arise @MichaelMaxwell Arise and Advise!

… I’d rather be summoned with Payday 2 or any of the GTA series, but hey, beggars can’t choosers.

Also, am I seriously the first person to make a game using dice rolls? I’m pretty sure I’m not the first one, and there are other examples out there. Mine are just more complicated. But it’s pretty fun to play around with once you get a good feeling of how things work.

My advice is making a label for the dice roll, and whenever you need to roll for it, use the *gosub or the *gosub_scene command to go to that label to roll.

A little question, do you guys prefer big chunks of updates at a time or do you guys mind if I constantly update the game with minor changes here and there?

Anyway, names have now been added, in the process of adding breakfast now…
I think 5 choices off the start should be good enough

I prefer to read big chunks. I intend to replay big chunks but if you do three dozen mini updates they’ll equal a big chunk so my ultimate ruling do what you feel inspired to do. If you have the time and inclination to write your fingers to the Bone for big go ahead. If you’ve got a certain scene in mind and various reactions but nowhere to go afterwards write that one scene. Trust the muse.

What I really meant was, I will do big chunks of scenes at a time but at the same time, when people suggest changes, when I have the time to I do the changes and then go right ahead and upload them. Just wondering if you guys minded, because often people read something and then some small part is changed and suddenly they think huh…did I read that wrong last time? Some people may find that uncomfortable, so…yeah.

Edit: Also for the breakfast, I know people like their choices so…instead of giving set choices of like say ham, eggs and orange juice. What if people got to choose the main they wanted and the drink of their choice? Then add them all together to make what they want for breakfast.

Edit 2: I’m just wondering what people thought of that idea, is there such thing as giving players too much of a choice? I want the game to have as much free choice as possible so players don’t feel hampered by the choices they are given. instead, doing this I could allow them more free will.

My own feeling is that for cosmetic things players want to have lots of choice. The more the better. Also, for dialogue options, the more the better (5-6 answers are good). These are mostly fake choices anyway, in that they only change one variable (like, increase the arrogant or humble attribute, or set the clothes of the MC). However, note that it is good when readers feel that these choices change something. So, in birth of a hero I sometimes insert little parts of code talking about what the MC is wearing, etc…

Well, don’t wanna be that guy but… oh who am I kidding, I definitely wanna be that guy. What can we expect in terms of romance? I’m a sucker for these types of stories especially if they have fleshed out and not tacked on romance.

I mean I’m not great with romance, but just how much romance does one need to be satisfied?

I mean I’m not great with romance, but just how much romance does one need to be satisfied?

The more the merrier if you ask me. But if it’s not your thing just whatever you feel comfortable with ofc, I’d rather have little/none than forced romance.

ALLLLLLLLLRIGHT everyone! Chapter one is relatively short on the choices but rich in detail! It’s ready to be playtested, Let me know what you think of it guys. And as always I welcome suggestions and changes. Happy Testing!

And here’s the link once again if you don’t wanna scroll up!
https://dashingdon.com/play/classified/projekt-liquid-fusion/mygame/

Darn it can you send me a screenshot of where you get that error?
I knew something was gonna go wrong haha

Now on the subject of romance . View it from a character perspective. For example do you visualize your character living like a nomad/the punisher. Not making connections etc a perpetual bsoldier in a never ending war. That’s fine that’s dandy. If the only real character you care about is the MC and the Villains then you can throw romance put the window. But if you want to give them friends, allies, people to socialize in general with than you might want to consider how the MC could connect with them. Let’s go with Bioware for example Dragon Age Inquisition

Dorian needs a man to help him see he is worthy of love when he has been told loving his own gender is shameful.

Sera loves sex and is afraid of opening up to another woman more than just her legs. Especially to elfy or magic women. But you show her she can trust in someone other than herself.

Cullen is a struggling lyrium addict and needs support whether to kick his addiction or use lyrium to keep him strong.

Cassandra needs someone to let her guard down for.

Solas needs to know there are still good things in this world.

When you write a romance you need to figure out what the MC and the RO need from each other. And how will they be able to find that balance.

Okay, I don’t understand what’s wrong I went to line 241 but there isn’t anything wrong there…I even opened notepad ++ to check manually what the heck?

This is literally what’s on line 241: One by one, your fellow recruits are called down to the medical labs. You look at each and every one of them, you know all their faces, their names, you know each and every one of them like family. For 3 years you have trained alongside them. Emily…Roger…Alyssa…Donovan…You know all of their names and you feel uncertain for the first time, for you never know when you’ll ever see them again if ever.
There is no space in front, or any kind of indent whatsoever 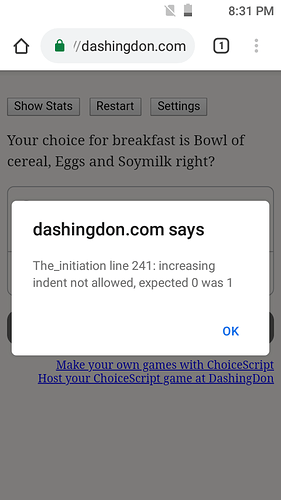 Alright guys I reuploaded try clearing your cache, it should work now!