I’ll answer @Dahariel out here as it involves a lil sneak peek. Bell isn’t very nice at all, I agree! 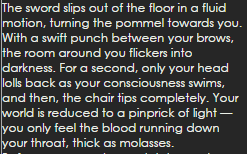 A jerk for sure!

(If Lena&Bell interests anyone as characters, I highly recommend Swordheart by T. Kingfisher (goodreads.com) , which inspired Bell’s sword-form and is just a delightful book in general. For any aro/ace’s that would be interested, it is fairly problematic when it comes to the FMC’s past husband, just beware.)

Now, an update on progress: This chapter is taking me very much longer than I had hoped for, but at the same time, I’m solving a lot of problems and plot-bunnies as I go. I wrote about 8k story-words on the second draft, and around 13k in planning alone. I’m still writing at a speed of about 3.5 existential crises per minute, but progress is being made and it is a very welcomed distraction to hang out with my characters. Life has been very humbling lately and it is taking a toll on me… My mom was hospitalized last week for heart failure (She is home and OK now!) but it was a very distressing time that I need to process. I will still be taking a bit of a hands-off approach to social media tied to Ouroboros for a bit longer, but I am working on it in the background. For the update to go live I need to finish 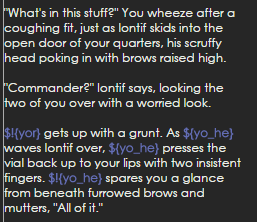 I know it’s been two months since last (and mainly technical) update, but I’d hate to give out content I don’t feel finished with. Thank you for sticking around even though the wait is long! <3 I hope you have a great day or night, wherever you are.

Oh, and here’s a sketch of F!Auryn that I made a while back but forgot to share. 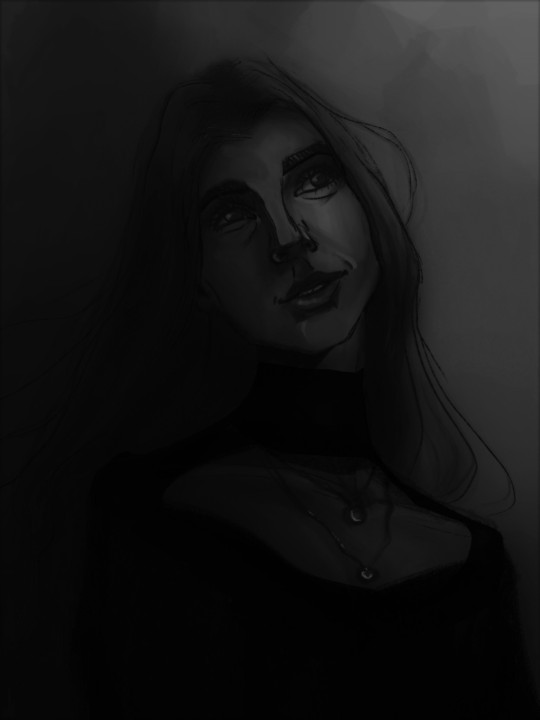 No worries family and yourself always comes first and foremost and I believe I can safely say for not just myself but for others that we love your story and look forward to seeing what you next unveil for us all to see.

I wanted to poke my head in to give a quick update on progress! I’m rising from my tomb and brushing the cobwebs off, so to speak. After a couple of turbulent months of me teetering on the edge of burnout, juggling work and a fragile family, August has finally been kind to me. I have managed to write consistently, even if the quantity isn’t massive, and I’m in the final stages of incorporating a new intro-path that allows for MC to get on their worst behavior. You got me! It completely transforms how your MC arrives to the Hedge, and how they are introduced to the crew, hopefully giving you reluctant MC’s a more solid base for your hesitation. (The angst is killing me. It was tough to write, but I like it!)

The rest of the update is a collection of unfinished scenes that takes us all the way to the end of act 1 and into the woods, but since I work on the scenes out of order depending on what I feel like that day, I don’t have a big update to announce yet. I don’t post much about Ouroboros on tumblr or here anymore, simply because I am too easily influenced by your wishes and suggestions. (They are all amazing, tbh.) I’m trying to be aware of scope-creep and keep the beginning of the story streamlined, even though I have an abundance of cool choices and consequences that I want to work in. I’m allowing myself to just mull these things over, to find priorities and merges that work with the plot I have already thought out and not morphing it into this whole new thing with other, shinier scenes. It’s harder than it sounds :')
I will be back to answer questions and such once the update is out, until then I will live my happiest hermit life and write from the shadows – just so you know that even if there aren’t any official updates, I’m still working on this project. It’s so dear to me. You can always find me shitposting on tumblr too, I do answer some questions sometimes, when I feel like it I do it publicly, but I’m more prone to answering private DM’s or non-anon asks.

Anyway, I need your help. I’m so unused to sharing my work like this, I find myself doubting every step.
I can either finish the new path (I can do that before monday no problem), or just finish the whole chunky update (I’d say a quarter at my current speed), or the last option that I feel is feasible; finish the next two scenes along with the new path, the flashback scene and Lena’s visit and post that as an update (where it’s possible that some plot events might change when the rest of the scenes are finished, depending on how much foreshadowing I want to include lmao)
I keep thinking one is better than the other, but I never come to a conclusion. What do you think?

Edit to add: I’m leaving the poll up for about a week, but wow! Thank you for all the voting!

I hope you have a great day/night, take care of yourself

Ok, polls closed! 188 of you, holy shit? Thank you so much for voting, and for showing interest even though I’m doing the Worst Job Possible of being approachable on social media. You really helped me put my head on straight, to focus on what I do best: keep on keepin’ on. I cannot wait to share the next part with you! 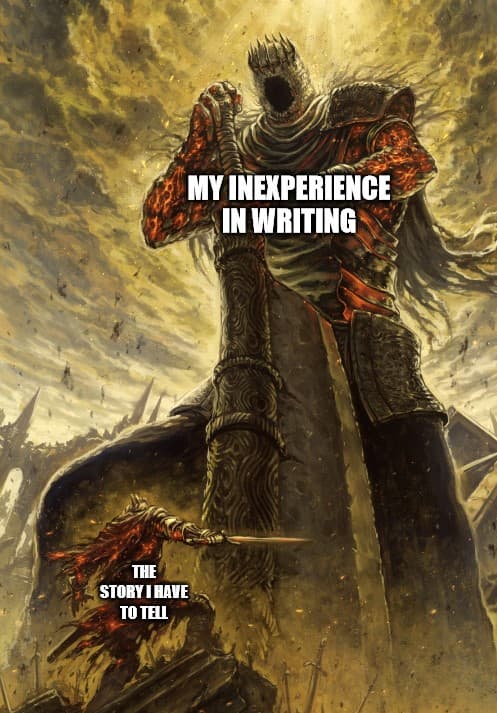 I don’t think I am able to exactly follow the plot so far. But I think I understand it enough to say THIS SEEMS SO EXCITING!

I really enjoy all of the characters that have been introduced so far, and all of the responses to my choices seem to be accurate. Nothing feels like my selection was pointless. Also a side note - I have never played a choice script game and been interested in all of the RO’s. Normally there’s only one that I jive with. But all of the routes are interesting and the characters seem likable in some capacity. Gonna have some tough time choosing? Is it spoilers if I ask if you plan to add choices that hard lock a route or if the relationships the mc pursues will be based on stats? (I’m sure someone has already asked sorry)

I don’t think I am able to exactly follow the plot so far.

Totally understandable, considering there’s only been some meager setup so far, and more about establishing the MC in this universe! From MC’s standpoint, the plot is currently about finding out what happened to L, why MC is being dragged into it; tangentially on what has being going on in Oakwerth, what MC’s connection is to that and what Oakwerth’s connection is to the Release (and to Lena (the last living heir to the fallen crown) and the Serpent clergy (Which you don’t know much about but I can say that they were advisors to the royal family before the fall, when they were renowned God-banes and not the frenetic cult they are nowadays. Every RO’s story ties into the plot at some level, and they all have different paths to finding the truth (and MC is at the core of it). There is a lot to unravel, as you can see… Steam whistles out of my ears when I think too hard on it. It is going to be a clusterfuck until the pieces of the puzzle start falling into place, lol.

Re: romance lock, I’m going to be real with you chief, I don’t know yet. Right now I write it with an action-response mechanic, meaning that when it’s time for a romance scene you will see variations of: 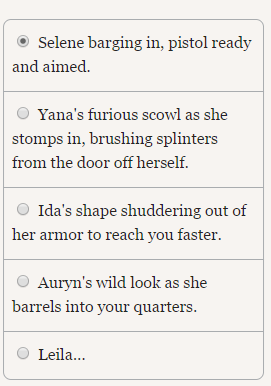 The subsequent scenes will draw from that choice, so it’s a “soft-lock” I guess? I think a romance lock is the most sensible approach down the line, but for now I’m kind of just throwing things at the wall to see what sticks. Stats will be used, but more in determining MC acts/feels.

Anyway :') Your review was a sight for sore eyes, I tell you. Thank you so much for the boost in confidence — when I’m hip-high in the swamps of this story, it doesn’t make sense to me either, but the appreciation people show for it are like lanterns guiding my way through the slough.

(Also make sure to cast your vote, I’m closing the poll tomorrow!)

Really good so far… and I’m pretty picky when it comes to WIP/hosted games. Looking forward to the next update.