Welcome to the Developer Diary thread for my CoG project, Noblesse Oblige! This is part of the Crème de la Crème series aka the collection of games including Crème de la Crème (of course!) and Royal Affairs. This is a standalone game that takes place between the two, with a brand new player character.

Spark a whirlwind romance in a crumbling mansion! You have traveled far from home to work as a conversation partner for a lonely aristocrat on a desolate foreign island. Will you throw caution to the winds as you grow closer with your companions?

Sneak through the estate to uncover the dark secrets of your loved ones, catch clandestine moments and midnight trysts, and fan the flames of romance! Your job on this remote island has just begun: work hard for a secure future or blow up your life for love. Who will you betray and who will win your devotion? 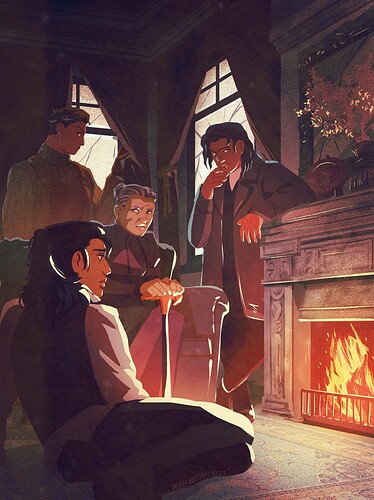 Hannah what will we do with you now :: Snickers :: sorry couldn’t resist I totally wasn’t expecting another game in the works from you and so early and far from the sounds of it

Will be reading this one to when I get a moment keep it up.

Wonderful!! Haha my goal is to get both out in 2022 - as we know, life is great at throwing curveballs, but right now I’m on track.

Oh, what a surprise! As a fan of CdlC and RA, I’ll have to check this one out! It seems to lean into a more somber, roguish direction than the other games, but the setting of a foreign mansion on an island definitely keeps into a romantic tradition. Very interesting outline so far!

Read the demo instead of doing last-minute studying for my midterm, haha. Excited to see this go in a different direction than CdlC and RA, especially since the MC is not nobility. Jezhan is also quite a bit different from Westerlind, as well…

I’m getting strong Jane Eyre vibes + maybe a little bit of Wuthering Heights. Maybe a bit spoilers-y, but how supernatural do you plan on making this? Like maybe there’s a reason for the close ties between religion and people, because there’s been supernatural stuff documented?

Anyways, color me intrigued. No feelings on the characters in any direction so far, but it usually takes me a bit to warm up to strangers, and our character is surrounded by lots of new ones.

I love this so much. It was such an interesting read and such a great way to start my morning

I really love the atmosphere you have built up. It felt so somber and wrong…. But in like, the best way ever. Like it reminds me of autumn for some reason.

Oddly enough, this entire work especially the atmosphere felt eerily similar to the atmosphere here. With how the creepiness felt almost normal and even expected by the characters in-game.

Overall, I think I’m in love with Jezhan and I’m upset you haven’t introduced us here sooner.

The characters intrigue me. I’m currently playing a character who is half Jezhani and that’s such a great choice ! But I hope this isn’t a flavor text and would bring up a unique experience to MCs who chose this background. Like, personally a half Jezhani MC has tons of potential here. Especially when transformation is such an interesting and sometimes integral part of gothic fiction. And, the idea of re-learning your roots is already an amazing motivation for an MC to go to Jezhan.

Overall, it’s a great WIP and I hope to see more

@Takashi_Shin I hope you enjoy the drama as it unfolds!

@marcusessmith84 thank you so much! not so sure on the graphics, but I’ll take the rest

@Vertigo thanks so much, I hope you enjoy! Yes, it’s a lot more moody than the others, which I’m enjoying writing a lot!

@42xyzzy So glad you’re getting Jane Eyre feelings from it - Jane Eyre and Rebecca are two of my key inspirations for this one and I immersed myself in both stories before I started writing. I’m not as familiar with Wuthering Heights - I read it a long time ago - but I should reread! There will be religious/supernatural overtones and themes but they’ll be pretty light - similar to Creme where the ghosts may or may not exist but some people believe in them strongly, and Royal Affairs where fortune-telling with cards may or may not show objective truth. The MC will be able to draw their own conclusions - my hope is to give believer MCs enough to work with that believing makes sense, while also giving sceptical MCs the ability to go “nah this is coincidence”. Thank you so much for playing and GOOD LUCK with your exams!

@Jess1973 I’m so glad, it’s lovely that you’re enjoying, and that you’re liking the new setting! I’ve got several references and character moments specific to the backgrounds (half Jezhani, learned at school, lived in a community with lots of Jezhani immigrants) but I’ll have a think about bringing them in more. I definitely want the MC to feel fleshed-out!

Already shared my enthusiasm on Patreon, so I won’t repeat myself here

A question though: I usually prefer to name my MCs myself, and I probably gonna go with a part-Jezhani MC for my initial run, what kind of names would you recommend I look into to pick out for them? This is assuming Jezhan has a real-life counterpart, of course.

I so appreciate your support!

Ooh, that’s a good point about names… I’m wondering whether to tweak how the name examples are done to allow for a Jezhani name, or maybe a middle name, as the ones on the list currently are all Westerlind. I’ll have a think!

It’s not a direct counterpart but I’ve taken general inspiration from Romanian, Russian, and eastern European names for Jezhani characters. Which is very broad I know! But hopefully it’ll provide some inspiration.

I really liked the Demo.

I liked the choices there was only one, where I kind of missed a fitting possibility. When you were asked if you want to Join the staff in the kitchen, I personally would have liked an answer in the way of: “I would like to, but I am not sure if the others would like me” for an open but very shy char. But of course this might be too nichy to add.

The story seems really interesting and I like to get to know the other characters more.

Wow I absolutely love the setting! This Jezhani religion and society is fascinating. I can’t wait to read more!

I’m very excited for this as I love your other works. Let me tell you, I almost squealed when I saw the options about what to do with your hair before bed. I loooved the options you provided and it was just a nice touch that allows for racial/ethnic inclusivity. The silk pillowcase option gets a chef’s kiss from me

So far I’m very interested in Danelak- he seems kind and I enjoyed that my MC was able to “ignore” his flirting. I feel like my MC will try to deny her feelings for him because she wants to be a proper employee but she will fall for him eventually.

@Frieza thank you so much, I’m glad you’re liking the different setting!

@Kaelyn I will see about adding that - that makes a lot of sense to allow as an option. Really happy that you’re enjoying it!

@attolia ahh that’s delightful, I’m so pleased that you like it so far and that the hair options felt good. It’s not something I’ve been inclusive about before and I want to do so going onwards! And I’m excited that you like Danelak - the romance isn’t affected either way if you’re guarded in your response at that stage. It’ll be clear when you’re at a point where you’re on a romance-locked-in or rejected choice!

I see what you mean with Vigor… The goal is for it to cover force of personality and force of physicality in one stat (like how Finesse covers both balancing/dexterity and lying) but it may need some tweaking or more clarity. Thank you!

Finesse sort of works for me like that as a combined stat, but Vigor does not.

I think this is because dexterity and deception are things that RPGs and media have taught me to associate with each other. Look at any roguish character in basically any media. Han Solo, Wesley from the Princess Bride, Catwoman, etc. Dex+Cha, the lot of them, so a combined dexterity+deception stat feels right. It’s my rogue level, basically.

Physical strength and force of personality don’t really have that shared association for me, though, and so Vigor as a stat just feels off. It feels like you combined Athletics and Theatre into one stat and those aren’t things I’d normally think to combine under one umbrella.

I think a rename might help with this? To me, the name Vigor mostly carries physical associations and so having it also measure strength of personality feels a bit off to me. Maybe something more akin to Forceful, which would carry implications of both a forceful personality and application of physical force.

That makes a lot of sense, yeah! I did originally have it called Force or Forceful when I was first outlining (I can’t totally remember why I changed it - possibly something silly like avoiding alliteration with Finesse!). I will have a think about whether renaming or adding another stat would be best. Ideally I’d like to keep it as streamlined as I can but obviously don’t want that at the expense of being understandable and intuitive!

As someone who KNOWS what happened in those books …… should I be um, worried ?

I’d take that as a BIG YES. Also, I have a theory that Pascha is countess’ illegitimate child but to save face she just said they were her cousin ……

@HannahPS – I know you said Jane Eyre was a direct inspiration…

I must admit, this game gives me shivering flashbacks to Charlotte Bronte, but not for Jane Eyre.

Rather it reminds me very much of Bronte’s third book: Villette.

Here is the Wikipedia synopsis, just in case you are not familiar with this third novel.

I am always a fan of your writing, so while I am still smitten with your other project, I am also excited about this one.