and um, you mix meter and inch, perhaps choose one? i know this is set in chicago but i hope u use the metric system

Button is American, so their inner monologue and calculations will be imperial, sorry! (I’ve lived over half of my adult life outside the United States, but still have to google most metric conversions.) Unity is an international organization, however, thus their profile sheets use metric.

No particular reason for Bali. It’s a generic “paradise destination”, so it makes sense that Button’s subconscious yammering might latch onto it as a nice, romantic place. A lot of my sense of humor resides in assigning random specific details to generic ideas–providing a visual of a beach and doggie ring bearers has more of an impact than saying “You two will elope to a place of your choosing,” imo. (I’ve never been to Bali, but pictures of it are gorgeous).

Does he have specific things he likes to cook/bake most? Like, does he prefer to make cookies, or that’s just what keeps people happy so he keeps doing it?

Nick started baking cookies because they were the easiest dessert to pack in Button’s lunch without getting squashed, but he’s pretty experimental when it comes to baking (thus the sriracha cake). I’ve been watching the Great British Baking Show recently . . . there’s no soggy bottoms when Nick bakes

the ment that followed button on the grocery store and just.

Wait, what? when is that?

when asked how button aced the ASE, pick “please, my whole life has been revolved around strategic avoidance” (i think it goes something like that)

@OfftotheracesjockyO Ah, I see. I only tried the heist and the got in a lot of fights options, so I didn’t know. Thanks for the info!

What does it say about me that I don’t like any of the bedsheet choices? I ‘sleep hot’ which is to say my body is a very effective thermal generator and anybody that shares space with me, whether it be in a bed, a small enclosed space such as an elevator, or even simply sitting next to me in a nice cool air-conditioned theater will sweat. As will I because they’re blocking my heat exits. I can’t do flannel (which is a version of cotton, just combed/fluffed up) or cotton because it actually doesn’t breathe enough for the level of heat I put out, thereby trapping my heat and making me sweat. Bamboo… I have not tried yet, but after I googled that, I am even less likely to try because it is not very environmentally friendly, at least not the process it takes to make it as told to the three sources I found explaining it to me. And because one of the fibers sometimes used to help weave it together is… surprise, surprise, cotton.

Silk, on the other hand, is both luxurious, and a little bit better at dissipating my heat, though not really by much and ugh, it ruins my sheets. So, I don’t even use silk sheets. I don’t use any sheets unless I am in the dorms. There I have to because plastic is even less heat dissipating than the sheet choices. Plus, sweat plus plastic equates to sticking body parts to the bed, and that isn’t fun at all.

If I could afford it, I’d actually get something made with Outlast fibers, probably the viscose (rayon) fiber to provide that silky feeling while also dissipating heat.

Finger guns are almost as controversial and polarizing a topic as actual guns or even gun control.

As to the finger gun choices… ugh. I hate finger guns. I always choose the wanting to shoot myself thing, not because I’m morbid, but because the other two choices just don’t appeal to me. The third one of shooting myself is the only choice left, and if I am to make a finger gun gesture AT a mirror, then I should probably just actually…you know. Shoot myself.

The typical gesture I would make that even remotely resembles ‘finger guns’ that also fits on the morbidity scale is to put a ‘finger gun’ to my temple while looking in the mirror and then dropping the hammer to shoot myself. shrugs

For me, when I am having a good day and feeling like I’m extremely attractive and confident I wink at the mirror. If its floor length, I sometimes even do a quick little booty shake after winking at it. Not quite sure what the masculine version of a booty shake is. Junk shake?

For the humor aspect that is probably supposed to be conveyed via wanting to petition for finger guns…something I’d do that is still mirror related is to stick out my tongue at the mirror, maybe even make faces at it.

Is this me trying to coax you into removing finger guns? Noooo… looks left and right and takes off running

comes running back Oh, and for the bedsheet thing… if you are feeling up to it, tell me what my high tech bed sheet desire means personality-wise for my MC. continues running away so you can’t catch the finger gun hater

Nick started baking cookies because they were the easiest dessert to pack in Button’s lunch without getting squashed,

omg our brother Saint Nick is a real saint

Hope we can arrange him a date with someone as nice as himself! 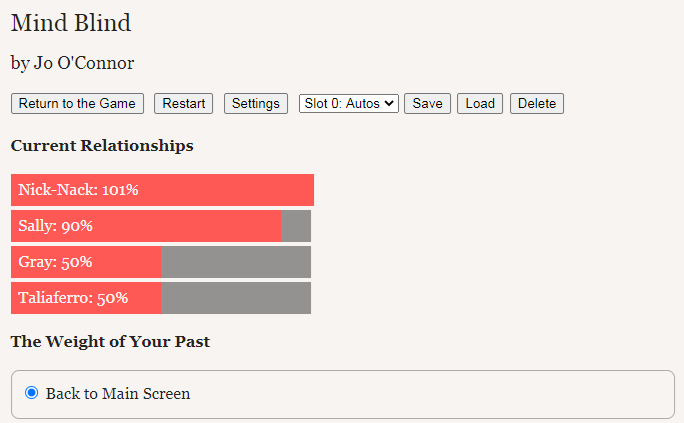 By the way I love the way you write personalities, and being cocky, confident and yet smart person makes me feel like Starlord. Which I love.

That’s… interesting. Maybe longer bar then would be good.

Not quite sure what the masculine version of a booty shake is. Junk shake?

I’m pretty sure the masculine version of a booty shake is still a booty shake, since all people have booties. I like the term “junk jangle” tho

(Let me take a moment to add that to my list of “sentences I never thought I’d write”.)

Finger guns are cheesy, which is more or less the point. Mind Blind’s MC doesn’t have a neutral personality–it’s more picking between different flavors of snark. The finger guns scene is a warning for the story’s tone and the minimum of provided options (there will always be at least one confident/cocky, humorous/jokey, or morbid/sarcastic). You can focus on combining two personality stats for more customized experience (or at least, it’ll work once I get my stat balances under control) but I’m always writing with those three presets in mind.

I wanted to warn readers about the customization limitations right off the bat, rather than give the wrong impression about how freely Button can be developed.

(Given Corona, I’d argued that the petition to have finger guns replace handshakes should actually be implemented.)

You make a good point about bamboo blend bedsheets not being sustainable, so I might change that to just bamboo (which is way nicer and environmentally friendly).

Maybe longer bar then would be good

I believe the bar lengthens by itself when it goes past 100%, but I’ll have to double check. Having Nick’s 200% be the same end length as the other characters relationship bars would definitely seem silly!

Hope we can arrange him a date with someone as nice as himself!

Holy Cow, this is different from the ones I’ve played before, very intriguing … I actually enjoyed it a lot, it gave me a new perspective … I mean at first who’d want to be a nobody … But after reading it its KABOOM yeah I’m mind blown I hope u get to finish this with no issues and I hope it’s a long read when its done (▰˘◡˘▰)
one thing thou … stop it with the CLIFFHANGERS (ಥ_ಥ)

looking forward to this~

for mcs that dont choose walking route, will they be able to set their past (regarding hs and gray)?

Hey, hey! Back again and read through the update. Really good

I love the new content. Just one question though:

Will the conversation between MC and BFF, and the options to approach BFF still happen even when you choose to heroically save the puppies? I’m, y’know, just asking for a friend lol

This probably doesn’t need to be blurred out but eh.

I don’t know if this question was asked already, but I think it would be funny to me and awkward for my MC to act like she doesn’t know K despite basically grilling him over how he took care of his pets. She’s also had some baseless confidence earlier that she’s probably feeling super embarrassed over right about now (time to raise the Morbidity stat

but I think it would be funny to me and awkward for my MC to act like she doesn’t know K despite basically grilling him over how he took care of his pets.

I second this, that would be hilarious. My MC would be so embarrassed that he’d be like “Me? Fantasize about marrying you in Bali? Idk what you’re talking about, never met you in my life, not me, wrong bitch

. . . there may be an optional followup scene labeled “whomecouldntbe”

Will the conversation between MC and BFF, and the options to approach BFF still happen even when you choose to heroically save the puppies? I

You won’t get the same conversation responding to her grumbling, but you’ll have different conversations with her about Nox/K.

for mcs that dont choose walking route, will they be able to set their past (regarding hs and gray)?

Not to the same extent. The cookie flashback doesn’t happen, although you’ll still have a chance to decide what your past relationship is with Gray. But it’ll be streamlined decision rather than a full scene, given what’s going on when he’s (re)introduced.

Each starting route has its pros and cons. I really want this to be a game where you can discover lots of new things if replayed, and forcing too many side stories into a single playthrough would also slow down the main plot’s pacing (which is already a slow burn reveal).

one thing thou … stop it with the CLIFFHANGERS (ಥ_ಥ)

Lol. I didn’t think the cliffhangers were too cruel! I told you why Button freaked out if they went K’s route rather than just ending with “You gasped! Dun-dun-duuuuun. Tune in next time to figure out why!”

I’ve been replaying the demo several times and I still love it just as much as before! However, after my most recent playthrough, I got an ad on Spotify selling cotton bedsheets, which I had chosen this time… coincidence? I think so. But it’s still creepy. I think I’m being watched.

Come to the high tech side of the sheet war… you won’t regret it!

The flashback won’t happen, at least not in the same detail. Your first meeting with Grayson will be later, when he ________s you after _____ happens and you’re _____. Because its MC’s fingerprints.

Saves, blackout, suspected? Haha idk I’ve been crawling around Tumblr and the forum for a while and there’s definitely been some mentions of a possible blackout 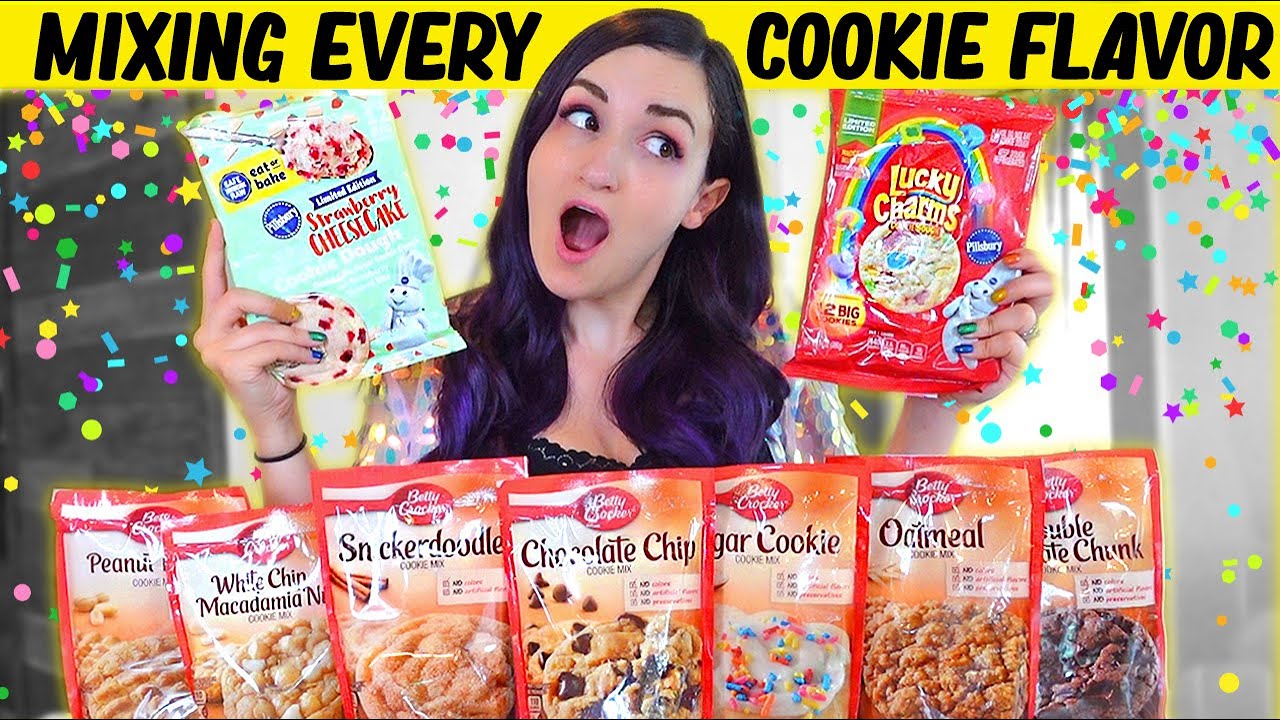