Only rosemance if u want to be evil to nick

.
I’m sure she will approve of it

It sounds like there are going to be 19 chapters.

Correction: It was recently confirmed on Patreon that the game will have 20 chapters.

I also bring a Rosymancer moodboard for my fellow Rosy simps: 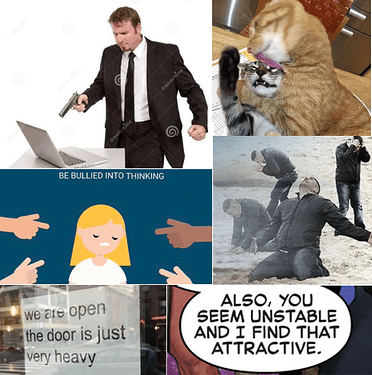 Love the cats. Perfect example of what it’s like to romance Rosy.

Who loves who initially? Would like to avoid them
before starting. I mean being friends.

Who loves who initially? Would like to avoid them

Sally can have a crush on the MC’s brother (Nick). However, the way this plays out in-game depends entirely on the MC’s own interest in her or their reaction to the Sally/Nick situation. I definitely recommend giving Sally a chance, though. She and her route are very sweet if you’re not leaning into the romantic rivalry too heavily and there is absolutely no doubt that she’s only committed to the MC.

By reaction they mean you can encourage or dissuade Sally & Nick’s romance. I’ve always dissuaded it because I can’t get over my dislike of Sally from previous drafts

Personally, unless I’m romancing her, I always encourage Sally/Nick because I want them both to be happy. There are some super hilarious lines in the game about how and why they would be working as a couple. Definitely recommend shipping them just for those laughs alone.

I also think Nick’s interest in Sally adds a nice bit of nuance to his characterization. He wants that one person who doesn’t (openly) fawn over him, who is opinionated as hell and doesn’t mind criticizing him right to his face. Sidenote: I’m absolutely convinced that there’s at least one weird parallel universe out there in which Nick has the most embarrassed, one-sided crush on Ambrosia.

i always discourage it. i’m not the biggest sally fan, but i also hate the idea of my friends being with my own brother, so i definitely don’t want to see it in games.

I’ll pay to see that!

Her interest in Nick was pretty different. More like a childish obsession/crush than an actual interest because it seemed like it was just kind of shallow and baseless and she wasn’t a great friend to MC when her feelings for Nick were involved, to me at least. The author changed a lot of those things after getting some feedback on the Sally/Nick romance. But for example, in one of the earlier versions, Sally got upset she couldn’t see Nick before MC at the hospital and when they went back to Nick & MC’s apartment, she took it upon herself to put on Nick’s favorite shirt (or maybe it was a hoodie, idr).

But I also just don’t really love Sally in general. I think it’s just a kind of “I would never have a friend like her, she’d drive me crazy” thing because she comes off as kind of immature to me. It could also just be my own age shining through since I’m closer to Nick & Gray’s age than MC & Sally’s lol.

but i’d hate to see my brother dating any of my friends irl and really dislike the idea of it in fiction, too

That’s actually a very good argument, even if it won’t sway me from my Sally/Nick course.

I’ll pay to see that!

Nick would be utterly mortified at the thought of Ambrosia ever finding out. Ambrosia, meanwhile, is aware but will never acknowledge the topic because there’s no way in hell she’ll explain to Branham how she knowingly gave UCRT’s leader a stroke over a silly schoolboy crush.

Sally got upset she couldn’t see Nick before MC at the hospital and when they went back to Nick & MC’s apartment, she took it upon herself to put on Nick’s favorite shirt (or maybe it was a hoodie, idr).

Thank you for the insight! That does indeed scream “yikes” in capital letters, and I’m glad it got changed.

It could also just be my own age shining through since I’m closer to Nick & Gray’s age than MC & Sally’s lol.

Haha! I get that. This is actually one of the reasons why I’ll happily settle for the oldest RO of the cast. Dating a nineteen-year-old comes dangerously close to robbing the cradle for me.

Um, so they simp for the brother?

Do you mean Sally? She has been infatuated with Nick for a while without ever approaching him romantically. Nick seems to be aware of her feelings but doesn’t seem to take them very seriously even though he is likewise attracted to her. Without the MC’s explicit approval, however, the narrative won’t focus on the mutual attraction and they won’t become a couple.

From what I can remember, I’ve only seen the option to support or not support those feelings come up when working with Sally on the fake profile after Button realizes Nick doesn’t want Sally to believe the stuff about him being a playboy or whatever. Other than that, I’m not sure if there are other moments you can trigger it

Wait…how the hell did I win that exam again? HALP!

Without spoiling anything, I’m pretty sure the rewritten game now allows you to trigger the romance at other points as well.

RE: Exam. Bribing Glitch with food is the easiest way. But remember, if you “win” the assignment, you cannot terrify Nick with the sexy, sexy Rosy essay.

I blame this yo honor!

Haha, I’m not sure how you did it, but I did it by asking Glitch to let us win since we get along/are becoming friends in exchange for going with them to order them a ‘Princess Berry Butterfly Blast’.

Uh if I remember (I don’t trust my fried chicken brain), I think I asked Sally to stop Cactus from getting in?

Wait…wth is her name? I don’t wanna call her cactus, even if it’s stuck now…Urgh

Okay, so her name is Kenna which rhyme with Jenna. Glitch rhyme with a word I won’t say…Kim goes well with ‘your chances are slim’, Sally is going with Wally, Nick is a tick at this point, and Rosie isn’t Odonnell…Thanx God

Ah, if I’m not misreading the code, if you had Sally block the door(?), then you either need to have Button measure the room’s radius or have your Insightful stat at 25+ to succeed.

Thanx, yeah. I got it by chance last time. I suck at number lol

Ah, if I’m not misreading the code, if you had Sally block the door(?), then you either need to have Button measure the room’s radius or have your Insightful stat at 25+ to succeed.