yeah exactly! Don’t worry about it, you are doing beautifully!

I replayed up to that same scene going with “unremarkable,” and the scene still seemed odd. So I went to look at the code and realized what was confusing me about that scene. The scene reads like a skill test to me. But in fact it’s not a skill test at all, rather just a specialty comparison – it just so happens that it only triggers a combat success on specialties that have a bonus to combat, regardless of your actual combat score.

After playing the demo, I didn’t want it to end. But alas, all good things are short lol

We need a spin-off of KeoxMC on a journey of Smoochie and awkward glances!

maybe we will unearth an oasis in the desert just for that picnic we mention in later chapters!

What? A girl can hope!

found: “It’s alright,” I look up as Keo places a hand on my shoulder. His voice is calm and steady, and I find myself breathing the slightest bit easier. Before I can say more, a knock startles me back to alertness. (his = her)

I’m still giving this a go, but first of all, I just want to say that I love the writing style! That alone was enough to keep me reading.

I’ll come back if I come up with any actionable feedback or find any errors!

@E_RedMark Thank you so much! I’m so happy you liked it!

And believe me, I’ve got just as many non-canon scenes buzzing around my head for all 3 love interests

Maybe someday I’ll write a few down and share them. And thanks for pointing out the typo, it’s now fixed! I actually caught another where Rin was being referred to as “they” for all routes while I was looking at it, so I suppose I’ll thank you twice, lol.

@CommonCalico Thank you so much! I’ve mentioned in a few replies but I mean it quite sincerely when I say it means the world that you enjoy the writing style. I hope you have fun with the demo!

@geldar Roger that - as I mentioned, I’m a bit new to stats and still working out the kinks, so I do hope you’ll be patient as I find my way. As always, thank you for the feedback

Interesting game. Even through it’s only got 2 chapters the world and characters are quite amazing. I wait for the next update

Just finished the demo. Normally I’d ask when do we get to stab Adaan in the face, but giving him sass is turning out to be far more fun.

A little disappointed when we get to the Archives, and Grumpy says “We’re here for a reason”, that we can’t say something like “Shhh … Gotta flirt with the pretty”

You don’t like Adaan? That’s the character I most relate to. Everyone else seems weird to me.

I don’t actually dislike anyone yet, but he’s the closest. But I do like stabbing those I dislike in the face - there’s at least one character in the games I’ve played so far, so this is a first

If it wouldn’t be much of an imposing, could you @Sailingshells add save slots please? It’s kinda a pet peeve of mine not having them, but I also think they’re beneficial for the whole

@Alley_Cat @Nevantyr @Christopher_Bull Thank you for playing the demo! I’m so glad you had fun with it!

@Nevantyr Save slots have been added! If you run into any problems with them displaying let me know 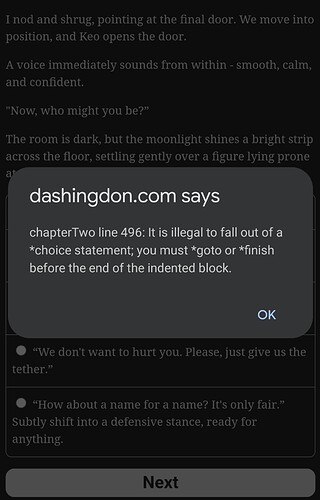 @Nexus_Knight It’s strange, I’m not able to replicate this but I think I’ve fixed it anyway, lol. If you continue to run into it let me know and I’ll keep digging

@Sailingshells lol found a bug of sorts i got looped back to the start of chapter 3 after speaking with the den conjurer who went to go back to his place by wren.

First off, may I suggest having the personality and the skills in the same page? They’re going to be referenced a bit, and they’re short enough that they can all fit well. Maybe have the skill descriptions on a separate page from that, as those won’t be checked much.

If I understand the skill descriptions correctly, fighting with magic requires raising both Combat and Magic?

I quite like it. You certainly gave us an engaging plot hook. Looking forward to see where this goes.

Pretty cool story, love pacing, nice variety of choices, focused skillsets (sometimes there are too many or too few) but for the love of god MORE SAVE SLOTS please.

“I am of Den Luana,” Rin repeats, a hint of annoyance in her tone. “I have all an Agent’s regular skills, and the city I serve posesses the largest collection of writings on unexplained magical phenomenon in existence. We also have strong ties to several scholars at the mc_name.” She shrugs. “If you don’t think that’s useful, you’re going to need someone more talented than I to check your mind is intact.”

@JBento Thank you for the feedback - I’m really happy you enjoyed the demo!

I’d be happy to consolidate the stat screens in the way you mentioned. I’m going to leave it until I have time to thoroughly test it because every time I touch the stat screen I break something

I’ll try to get it changed by next weekend. There will be all but endless opportunities to sass Adaan, fear not! I can’t help but be fond of almost every character I write but that man needs to learn to talk to other people a little better, goodness gracious. I get such a kick out of sassing him myself

Most of the typos you mentioned have been fixed - on the “themselves” point, I’m using they/them pronouns for the assassin because their gender isn’t clear in the moment, and I’ve exclusively seen “themself” used when referring to a singular person who uses they/them. I hope that clarifies, and if I’ve misunderstood your statement please let me know. I’m glad you like Wren, they’re delightful to write! You hit the nail on the head perfectly with how their mind is working in that moment

“I suck at everything” cracked me up - I actually agree with your assessment that that one won’t be picked by many (or maybe by any!), but I like it in a sentimental way and it doesn’t intrude on the story, so I’m likely to keep it. I enjoy little nods to characters who aren’t particularly amazing but do their best and find ways to get by anyway. For what it’s worth, I always include a choice option that will allow an mc with that background to succeed in important moments. I’m sure that doesn’t suddenly make it an enticing route, but I hope it’s at least comforting to know it’s not doomed to failure

Finally, thank you for phrasing your feedback so kindly! It might be a little thing, but it’s dearly appreciated.

@Valixon Unfortunately, I was unable to reproduce this one! I took a look at the code and ran it through on every relevant option (as well as some previous options that could’ve been affecting that choice) and it continued as normal for me. It’s possible it was a browser or mobile issue that caused this, but if it continues to happen let me know and I’ll try looking at it again.

@Gapaot LOL. You have 13 save slots now. Go forth and enjoy. If you still want more let me know and I’ll tick the number up again. Also, the error you mentioned has been fixed.

I hope that clarifies, and if I’ve misunderstood your statement please let me know.

Oh, sorry, my bad, I didn’t even notice I’d written “themselves” v. “themself”. Truth be told, I find it very odd, but I’m completely and utterly ‘meh’ about it, one way or another. What I was actually pointing out is that you’re missing the “of” in that bit, as in “out of it”.

ahahaha, nice, time to explore every options in every interaction!