Doesn’t this feel like she responded to MC’ nod? 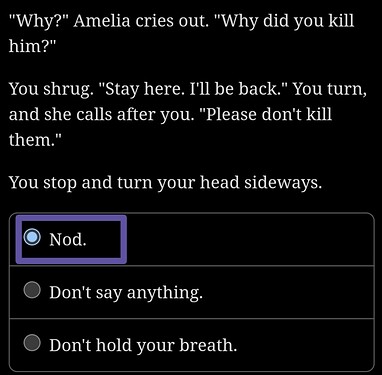 Maybe she has partial sight? Not all blind people are completely blind.

Doesn’t this feel like she responded to MC’ nod?

Lmao! Yeah. That’s an error on my part. Thanks for pointing it out.

Maybe she has partial sight? Not all blind people are completely blind

I know that not all blind people are completely lack of sight. But she lost her sight in some kind of chemical accident or blast or something like that and it’s close to zero the probability of the partial blindness, especially when the same thing killed her brother and it’s already explained in the story.

That’s an error on my part. Thanks for pointing it out.

anytime. Also a small suggestion but I might either sound idiotic or something like that, still Amelia saying that will she ‘see’ MC felt like that phrase is ticking at y brain

…so, instead her asking ‘if she’ll meet MC again’ would be an appropriate sounding phrase there imo.

so, instead her asking ‘if she’ll meet MC again’ would be an appropriate sounding phrase there imo.

Yeah! Fixed that as well. Thanks! Btw, unless I am mistaken, I remember you saying you would like to be a tester. Has the role been assigned? I can’t tell if you have a different username over there.

As a blind person myself, it is not uncommon to say something like When will I see you again, or let me check this out etc, especially when you grow up and spend time with a bunch of sighted people. I mean, you eventually start talking the same way they do and everyone kind of gets It.

Does it matter whether you kill or not the pink short-side haircut person?

Yes, it does matter. If they are alive, they return down the line.

That’s good to know… will they be a RO?

@Emily-katie_Smith Thanks! I’m working on the next chapter. Planning to have it out within 40 days.

@Denzil_Melgior_Nagel Thanks for sharing. I’ll keep it in mind.

@Max_Jones Yes, it does matter. If they are alive, they return down the line.

I remember you saying you would like to be a tester.

Has the role been assigned? I can’t tell if you have a different username over there.

nope. Lemme check if by any off chance it happened and my mind was in another dimension.

I’m assuming you’ve killed either Capricorn or Taurus or both.

Was there a rewrite? I have no idea what’s going on anymore.

Yeah, a while ago.

The department would see the latter as endangering Flava, Eden, and the hostages including the princess. That would be something they could actually see as a fireable offense. Not that they would, what with just saving the princess and everything.

So Flavia’s response flat out doesn’t make sense as is.

The first thought that comes to mind- If we had less lethal weaponry. This is a science fiction setting, it wouldn’t be that weird if we had even better alternatives than are available today.

If we could have left the kidnappers on the floor tased, or blind from mace, or knocked down with bean bag rounds or something, and we still chose to kill them…then Flavia’ reaction would make sense.

But I have no doubt that it’s not Eden’s department policy to expect its officers to do high speed trick shooting that the vast majority of their officers couldn’t pull off if their lives literally depended on it.

I pick for my MC to be a gay dude but the childhood friend ended up being a girl I thought that RO’s gender was playersexual based?

You choose the childhood friend gender in the prologue

Oh I skip the prologue because I’ve already read it a few times now must have forgotten that choice happened there but still an odd thing to happen if the game gives you a choice to skip the whole thing, especially with playersexual gender thing.

You choose the childhood friend gender in the prologue

So I want to start by saying that I really have enjoyed the revisions to the story. Admittedly I was a little lost at first(Saw that the story updated and jumped straight in without reading revision notes or post), after I got my bearings I really dove in and loved the added character interactions I got with the beginning.

That being said I had some minor critiques(that every time I type them seem nitpickey so feel free to ignore, but they kinda stuck with me) and some places where it looks like either the code is off or there’s small pieces of story missing. With screenshots of course.

And to just end on what I read as a positive note, I’m most happy with the new way our characters get introduced to the Princess. As outlandish as a kidnapping is, it feels alot better than when before we’d be forced to hang out with her for a bit after randomly saving her dog from traffic. Also I will be joining your discord when I get home from work and hope that you’d still be open to more testers ^.^