Ahhh, I loved this! Great work so far!

I love the idea of a town where supernaturals are “outed”–or are at least an open part of history and acknowledged–so when they show up, the MC doesn’t have to go through a sometimes-troublesome period of “huh? vampires are real? they exist??” I’m also intrigued by who Idris is and why these people are after her! It’s sort of a Twin Peaks mixed with Wayhaven vibe so far, if that makes any sense–and I’m a huge sucker for cop/detective stories, so more for me!

I can’t wait to romance Levine, but ghnrwfg I sort of… kind of… felt a lot of chemistry with Quenton so if you ever make a romance with him DLC I’d buy it so fast

Great writing on this so far!

I’m intrigued to find out what happens next!!

Heh… I kinda have a love for metaphors and similes, so …

how does everyone else feel about it? I’ll change if it it’s an issue.

I loved the descriptions, personally! I would personally keep them (and I got to look up what peridots are)!

Yes, this happened to me, too! It’s a bummer because I want to edit the first post with quizzes and such, but I always get attached to the click counter. XD Mine wiped out like 10k clicks, haha!! I don’t know what it does that, but I suppose we’ll just have to not get attached!

This was very interesting.

Just a few things I noticed:

It seems like you keep on switching back and forth between tenses throughout the flashback, like @sviyagin said.

Although I don’t mind metaphors for choosing the color of hair or eyes, having “hazel” next to all these gemstones and minerals took me right out of the story. Then when I returned, I had to look up “star garnet” and “gray pearl” like @Winter. By the time I finally did choose an eye color, I was less absorbed into the story than I had been.

But I liked the end and I’m looking forward to reading more!

Forgive any errors as I’m replying on mobile

@Szaal yes, I didn’t realise the save system has to have a unique name! Thank you and @Winter for highligjting that. I’m going to edit that when I’m free after work.

@bruisedsoldier @Aleksa100 thank you! I’m excited to write those scenes too!

It’s sort of a Twin Peaks mixed with Wayhaven vibe so far, if that makes any sense

I remember you mentioning that back in the Interest Check thread xD I’ve actually never read Twin Peaks before but I’m adding it to my to read list! * eyes ever-growing list nervously. *

The story here will have quite a different feel from Wayhaven as while romance will feature, it isn’t the main focus xD And wayhaven is a masterpiece on a level I can only dream to achieve. As is Shepherds of Haven too! And @rinari, thanks for catching those typos! It’s always things like this I miss even after reading it many times.

Regarding the click counter, @Winter yeah, it seems to be an issue now! The strange thing is some threads appear to be affected while others are not.

i wonder what’s causing it. I’ll try not to get too… attached

secretly sad at the lost views

@rinari Losing 10k clicks for yours must have been

. I wanna update some stuff too but… that click count… * sighs *. Oh and I really did love the quizzes you made for your game! Can I tap on your idea, if i wish to use the same idea for my WiP?

And @rinari @kitkat ahhh I’m so glad that the chemistry between them did come across! I was trying to create a mentor/mentee or a strong friendship vibe between the MC and Quenton, so there isn’t a romance route planned for him yet. But… who knows how that might change

@sviyagin @expectedoperator that was the scene I kinda had the most trouble deciding what tense to use, heh. I’ll add it to my edit list and figure out which one to use…

And for everyone who gave your opinions on the use of gems to describe eye colours, I really appreciate you sharing them! I’m kinda wanting to keep the gems idea but I see the issue that some are indeed really uncommon, as is the issue that some colours just don’t have that common gem colours. I’ll… figure something out.

I can’t wait to romance Levine

I’m terrified I can’t write those scenes well, but I will work hard on them

it’s my first time writing fiction on such a scale, so I’m learning along the way! The last time I wrote over 8k words was for a research report. Wasn’t fun.

Very good suspense and intense story telling from the beginning … i am sure there will be explanation on why MC is the chosen one ? :-)

Since MC is a human dealing with supernaturals, i suppose there will be sort of special weapons to be used against them , like silver bullets against werewolves and Holy Water against Vampires ?

while romance will feature, it isn’t the main focus xD

Perhaps it could be written like @Nocturnal_Stillness 's Unnatural ? Where the main focus is solving the case and deal with supernaturals , along the way MC will be given a choice to prepare the correct weapons to battle them

I think it could be develop into a more intense supernatural hunting story if you want to set it apart from Wayhaven , another good example is the Supernaturals TV series … where the MC is going after the supernaturals instead of waiting for them to visit

Can the MC “apprehend” those ROs , before deciding whether we want to work with them ? Like in Unnatural, Dennis the werewolves had been captured and it is up to MC to decide whether he/she wants to save Dennis and enlist her as an ally

Since MC is a human dealing with supernaturals, i suppose there will be sort of special weapons to be used against them

What I will say is you’ll be working with some supernaturals. Now, about those that want the girl…
I’ll have to give a non-answer as it will delve into spoiler territory!

Perhaps it could be written like @Nocturnal_Stillness 's Unnatural ? Where the main focus is solving the case and deal with supernaturals , along the way MC will be given a choice to prepare the correct weapons to battle them

I’ve not read Unnatural either, but it certainly is on my to read list too! Regarding your question though, no: I don’t really want this to be similar to either story because I do have ideas that I feel will make the story different from theirs.

In what I’ve planned so far, the main goal you have is to try to find out what exactly makes Idris so special and why Miranda chose you. The Keepers will only associate with you purely because of that. I haven’t sorted out some details to the story yet, but I do plan to include a focus on building the relationship with Idris (for this will potentially have lasting consequences in the future).

At the same time, those people you meet at the end of chapter 1 will continually be on the hunt for all of you, especially Idris, so that’s a plot point I’m looking to explore.

Oh… I see , so it will be more like… MC is sort of like a Protector for Idris …

Thanks for all the help you lovely people have provided, and I’m really humbled that you enjoyed my story! I appreciate all your help catching those bugs and other issues, for providing your opinions, and for just leaving a like and/or comment

Let me know if I missed out any other errors if it’s not too much trouble. I’d love to hear your thoughts for those who are new to the thread too! I’ll be happy to answer any questions you have

I’ll be starting work on Chapter 2 soon; right now I’m be looking to see how the new characters can be introduced seamlessly, and how your interactions with Idris will play out depending on your choices in Chapter 1. Here’s hoping nanowrimo will help to squeeze those dead creative juices from my brain.

so… I’ll hold off updating that first post for now until chapter 2 is done!

This is an interesting premise so far, and I love your writing style! Can’t wait for more!!

I’m enjoying what I’ve played of this so far, but seem to be hitting a minor bug here: 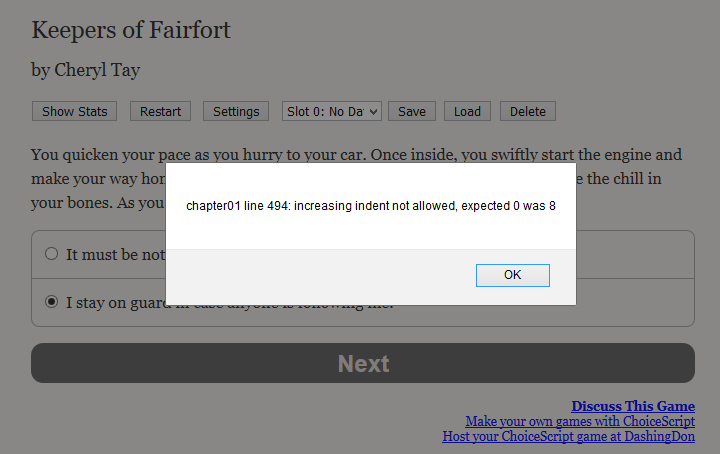 This is good, real good. I got so invested in it that my heart sank a little when I reached the end of the demo., keep up the good work!

Cool WIP, I’ll help out when I can. I’m looking forward to its progression.

thanks for spotting that! It’s fixed now.

And @tnn @Tylar11021 @Daxterix @Sofia @Takashi_Shin @VainCorsair, it makes me so happy that y’all are enjoying the story!

Yesterday 3 times game gave error when i clicked on something like stay aware while going back home .when someone was following. I was sleepy yesterday.now i tried to play for screen shot. Nothing happened

It’s the one that @Elysian pointed out I believe! I have rectified that, and it passed quicktest before I updated it again, so it should be fine now. I also did a quick play through and it could go pass that scene. Are you still getting that error? It shouldn’t be the case if that’s so…