In the Cards (Tarot-Inspired Fantasy) WIP

Hello, all! This is my first time posting a WIP. It’s titled “In the Cards.” You play a budding psychic learning how to use your powers. After being gifted your grandmother’s tarot deck, you start seeing hints that not all is right in the world of spirits and fae.

So far, I’ve written two chapters (~81k words) out of a planned sixteen chapters. Updates will be slow but steady.

You can play the demo here: https://dashingdon.com/play/kalouco/in-the-cards/mygame/

Summary:
The story is set in an alternate world with a very loose medieval-style setting, with some Victorian-era advancements. Spirits, fae, and humans live side-by-side - not quite intertwined, but not separate either.

You’ve always had psychic powers. Reading auras, speaking with the dead, and channeling spiritual energy through runes - these number just a few of the things you’re capable of. It’s not an unusual gift in the kingdom of Khepris, though it’s uncommon enough that you’ve only met a few other people with such abilities in your small hometown.

After a plague sweeps through the kingdom, unrest bubbles up in the realm known as the Beyond, home to fae and spirits alike. A group of fae who call themselves the Butterfly Court are testing the boundaries between your worlds, and they don’t seem to care what harm they may be causing along the way.

I also have a Tumblr where I plan on posting updates. If you enjoy it, please consider supporting me on my Patreon as well.

Thank you for your time!

Wow new game! I like the notifications in the text and choices so far, they are informative and non-distributing. My MC asked a spirit for advice, though he said MC can be in danger, but it seems quite peaceful for now. Can’t wait to see more!

Thank you for the feedback! That’s good to know. I personally kinda like the idea of game notifications so I wanted to try it out. Nice to know it’s not jarring!

Thank you, I’m glad! I’m working hard on the second chapter. It should be ready to go sometime late next month. So I hope you’ll come back then.

Hello! It was a good read and a interesting subject.The stats check seems fine but sometimes I didn’t really knew which stat my choice would affect so I used the notification.

Ah, yeah, I can see how it can get a bit confusing. I hope the notifications helped there!

I loved,simply amazing and full potential, and look that i didn’t even played the other routes.
I hope to meet the RO’s soon and how they will react to my almighty magician

About the tarot cards in the game, a question I have is if the cards will have any abilities or maybe our MC magic being attacched to the cards, or if they will only be for divination purposes, if there are abilities, even if are minimal, I believe it would encourage players to collect all of the cards.

And continue with your beautiful work author, i hope that this game has more popularity soon

Now about my MC i imagine he being pretty badass as a magician with his cards: 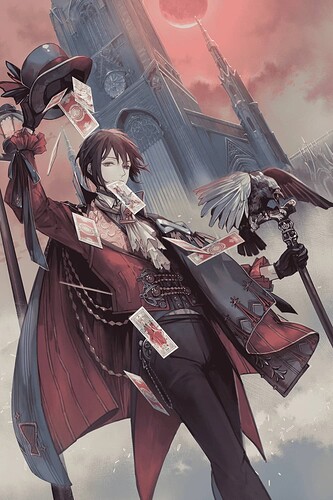 About the tarot cards in the game, a question I have is if the cards will have any abilities or maybe our MC magic being attacched to the cards, or if they will only be for divination purposes, if there are abilities, even if are minimal, I believe it would encourage players to collect all of the cards.

That’s a good question! In short: yes, I do have plans for the cards other than divination. One other use (that you do have a slight opportunity to use in the first chapter) is to perform castings using the cards instead of with runes. It’ll be explained a bit more in the next chapter, but basically, it allows your spells to be stronger. Don’t worry, there will be more opportunities to explore this in future chapters.

The cards have some other surprises in store, but I don’t want to give too much away all at once.

I just finish reading the demo and I like it; and can’t wait for the update.

The pacing of the story is really smooth. Good job.

No Grammer error from what I read or seen if there are then they are really minimal that I will need to reread to find. In other words an excuse to read the demo again.

And I don’t see any problem with the notification being displayed. I think it really helps in the decision making process specifically when it deals the MC’s wellbeing and spiritual energy; it will help readers in choosing between a small or big penalty concerning the two.

In all I’m hoping we get to meet our mother and our siblings again and finding out more about our grandmother.

This is a really interesting story, not only is it interesting but fantasy stories wise I think that this may be unique at least among popular series and the like. It’s a really unique read and so far really good.

So I tried the “rejection” route for the deck, and when talking to the Hermit later, if you decide to hear him out about it, the deck that was locked up all the way back in MC’s room magically teleports itself into the scene like it was there all along.

That was the only goofy error I saw though. I really like the whole setting, the characters, and the stat system you’re designing for your WIP. My MC is probably going to go the hard way for a first run through the whole of the WIP process. Which is too bad because there’s definite notes of humor in how we can interact with the deck so far. Throw it out the window huh? Why not!

In a world where the human race is oppressed by oppressive and evil dragons, a group of heroes unite together including a rogue, a healer, a sorceress and an archer. They will have to put in all their effort in fighting the evil force that threatens the humanity.

Whoops! Thanks for catching that. I thought I’d tied up the loose coding ends there, but it looks like I missed one.

I’m glad you’re enjoying it, though! And I’m glad you want to try the “hard” route first - more thorough testing that way lol.

Minor update as of 12/6/22: Fixed the bug that made the cards randomly appear during the “no tarot cards” route, along with a few minor typos.

You’ll also get to meet a couple of new fae. Also, some of the choices you make in this chapter will play a big role in how chapter three ends.

Edit: okay it was 1am when I posted this, and I meant to ask. Should I add a skip menu at the beginning for people who want to go to the newest chapter right away? The main reason I hesitate is because quite a few things are dependent on choices you made in the first chapter, but I could just make some pre-made characters that reflect that.

I just finished chapter 2 and it’s wonderful as always, one of the things I love the most is the interactions with the fae, especially Pily( Our emergency food), and I saw that one of the RO’s is a fae which just makes me more eager to have more interactions with her , we met her at the festival but it was too short to get an idea of ​​her personality. The other RO we have “met” was Nira who, due to this brief interaction, I could already imagine what her face was like when the mc’s mother started talking about her😁.

About your question if you should add a menu to jump to chapter 2, I think it’s not necessary and it would just give you work, maybe it’s only necessary when you’re in chapter 6 or beyond, but still I would find it kind of unnecessary because there are saves.

I only had one problem so far with one of the options that didn’t load( the option below too), I’ll send the photo of the choice. 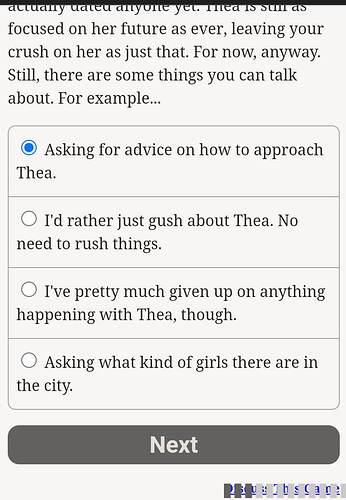 Thank you for the thorough feedback! And I’m glad you’re enjoying so far. I actually wanted to extend the fae RO’s scene a bit, but was worried it might be too distracting since that part is relayed through letters.

Good to know re: the skip menu. I’ll definitely keep it in mind further down the line, so long as there are people who really want it.

I’ll check the code for the place you pointed out. I have an idea of what might be causing it, so I’ll hammer it out & update hopefully in the next day or so.

Edit: okay, I’ve fixed it. The problem was that I forgot to upload a file that was referenced in that particular option.

'Tis what I get for uploading late at night.

I like this WIP! The pacing is great, and the magic subtle but fascinating.