I just put it in, and revised some other stuff as well. It should work now!

Okay, that issue is fixed!

Buuut I had a game breaking bug now

Anyway, I’ll make my quick report of what I could play through, for now.

Phew! Alright, I fixed the indentation on that! And You’re right, it was supposed to increase warmhearted and soft, so that is fixed now too! Thank you for being so patient and thorough, I really appreciate your help!

Haha, seems I was almost at the end when the issue occured. Anyway, now I’m done!
I’ve encountered two small typos on the last few pages:

And I think that’s it - no other bugs or anything!

So, anyway, you’re welcome, and don’t sweat it! The forums are here so issues like that can be spotted and solved!

And now that I’ve reached the end of the WIP, I can actually comment on it.
Basically, I adored it! It seems it will go right into a trope that I love, which is a very nice character (since the game allows that for the MC) forced into a life of crime even if they hate it. I always love the kind of angst stories like that can bring, and it’s all the more satisfying if at the end it’s possible to get out of that life.
That aside, the characters are so lovable? Like, HOW? I mean, I got SO attached to all of them, so quickly - that’s a bit crazy. I think Poldi holds a special place in my heart, from them all - something about him really grabbed my attention.
What helps too is the fact the descriptions - the places, people, scenes, action - have something that’s… I dunno, very vibrant, or alive. Like, they aren’t necessarily the most detailed descriptions I’ve seen in an IF, but they make the world feel alive. And honestly, if it already feels that way with such a short WIP, I’m really eager for more!

Really, aside from the few bugs, which are now squashed, I don’t have any complaints or issues whatsoever for the time being.

Alright I squashed those bugs too! And thank you for your very kind comments! That is exactly what I was hoping to accomplish and definitely the tone I was trying to set at the beginning.

Hopefully my future updates won’t be as buggy, I think it’s the first entry that’s the hardest! Now to figure out the save system!

Hi! I enjoyed the demo so far and look forward to more! I really like the idea of having a poor little street urchin character lol. Here are some minor typos that I found:

Another thing I noticed is that there are a lot of tense changes. They didn’t lessen my understanding of what was going on but it was rather jarring for me personally. Mainly the issue was with present tense suddenly becoming past tense.

Thank you for reading and I’m glad you enjoyed it! Sorry about the bugs and typos, but thank you for helping me catch them!

At the beginning of the story right now, decided to play as a cheery and charming, if naive, kid and MY HEART HAS MELTED WTF!! I want to adopt my the MC- when the painted ladies asked if we had anyone and we could answer with “I see people all the time! like vendors and you!” and then when the MC didn’t know what a relative was… they’re just so

I want to protect themmm

Really liking the story so far. It is a very interesting concept. Looking forward to the end.

I think Poldi holds a special place in my heart

Well, for once, we agree on something. I really like aloof big bro, or at least that’s what he feels closest to to my mc.

That said if there ever is going to be a reunion my mc would be very reluctant to face Poldi again, particularly if Poldi has gone on to become a famous scholar or scientist while my poor mc has only graduated from locust to rat.

forced into a life of crime even if they hate it.

Yeah, I can definitely see how this mc of mine hates it, certainly compared to what might have been.
My mc hates using his skills for crime and to aid in the ever growing corruption and we already know from the blurb that it is only going to get worse once the mc starts getting blackmailed by some idiot noble.

Haha, truly incredible - we’re pretty much on the same wavelenght about everything, this time.

You have a very vivid style, that got me hooked really fast. The characters felt real and were very likeable, so I think it’s easy for reader to feel like those characters mattered to the MC after the prologue.
The descriptions were long enough to get a grasp at the setting and to imagine the city, without being too long and tiring. I’ve become invested really fast. I also want to commend you for the stats page. It’s unusually beautiful.

I have some observations regarding the stats screen though:

Those problems were very small and rare, but I thought you might want to correct them sooner rather than later.

There also might be a small continuity error here:

I don’t recall talking about green skies if MC decides to be silent. That’s what happens if they call the teacher on their inattention.

And I think there is another one here:

I also dived into the code, as usual, and noticed this:
If our teacher is Alin then while choosing how the MC feels about his situations we get some increase of stats: 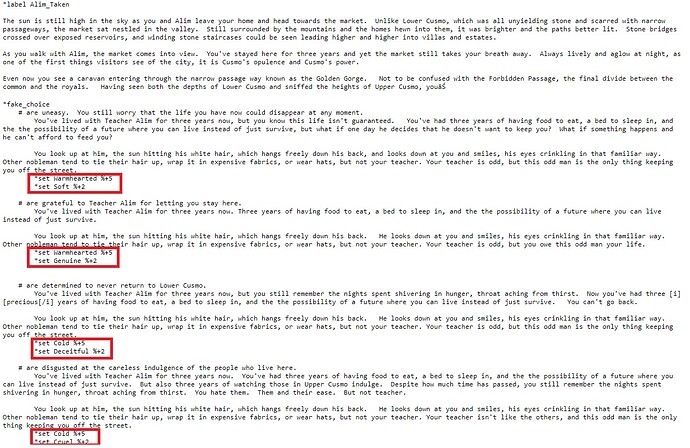 I also have a question - will you implement save system later?

I really enjoyed the demo, it has a really strong and memorable start to the game. Looking forward to read more and to learn more about the setting and characters.

First of of all thank you so much for your kind words and I’m glad you like what I have so far! Your observations are spot on, and I do intend to go in and address the continuity issues and update the stat page today! Also I do plan on putting a save system in place, I just have to figure out the tutorial

Reise raises a skeptical eyebrow from the comfort of the couch.

So it’s between Remy & Rayvn, then. Both of you up for this?

Rayvn nods with interest while Remy studies the LI list with a smirk.

Haha, truly incredible - we’re pretty much on the same wavelenght about everything, this time.

Well, I imagine my mc may love fancy clothes a bit more than yours and he has probably adopted more of Poldi’s more jerkass mannerisms himself, so he is a bit less tooth-achingly nice.

Other, than that, yeah it is uncanny and my mc is really sad and more than a little bit bitter that his potential future as a scholar or scientist was snatched away the way it was.

By the way what exactly happened to teacher? I have a feeling something he said or did ended up being taken the wrong way by the previous King and his spymaster.

If so my mc is sure to resent the current King and especially his mother.

Wow. This is awesome.

This is really good. I especially love the Prince of Persia vibe I get in the beginning.