December 1st: I added another chapter in the urban fantasy arc

You return to Hong Kong, the city you grew up in, to identify your fathers body and settle his affairs.

The game has is very broad with a main arc and six side arcs which are very substantial in of themselves.

Main Arc: Solving the mystery of your father’s murder, saving a woman in a coma who needs an expensive operation, running a bar, figuring out what to do with your father’s unpublished novel.

Writers Arc : Revive your failed writing career with a gold opportunity to get involved in a Hong Kong movie production. It begins as a script rewrite job but evolves into something else. Make a movie, try to keep your sanity and look for love in all the wrong places.

Donnie Arc: Work as an informant to a renegade Hong Kong cop. Donnie is also your childhood friend whose heart you broke when you were sixteen. Can you bring down the Triad and regain her trust?

Spin Arc: Plan the perfect heist, the Macau Job with a childhood friend. Can you work for the Triad while secretly planning to rob them at the same time. Can you get Spin to follow orders?

The Big After: Descend into a world of madness, magic, weird science and mystical Kung Fu powers in the After. Can you navigate the Infinite City? Can you love a ghost? Can you romance a woman in a coma? Meet gods and shake the pillars of heaven, literally.

To play the demo, go here: https://dashingdon.com/play/jollyspaniard/hkbo-closed-beta/mygame/
The demo has some replayability.

More Asian based WIPs! Yay! The criminal underworld theme is interesting, and from the summary there are a good mix of “black and white” paths for MC to go down.

As for feedback: some punctuation appears to be missing from the options, and is there something wrong with the stat page? Maybe it’s just my phone but it’s not loading…

Already better than a lot of demos on here. Keep it up.

Thanks for bringing up punctuation. I’m not sure whether options should be punctuated or not.

I’ve uploaded a basic stat chart. I haven’t included relationships or wound status but it shows you the primary stats.

In the interesting of evilness. I have one hidden stat called Tragic which is very important. High tragic scores will be communicated via the narrative.

It’s really interesting special is trained I. A lot of stuff

It’s fitting that it should be her. She was the one who saw you off the day you left Hong Kong seventeen years.

I think you missed a word on the end of that sentence.

Thank you so much. I’ve fixed that.

Cheers for the feedback. It’s much appreciated.

Found another missed word for you:

“An enigmatic man even to his own flesh and blood. Perhaps you’ll be find out more in the near future.”

She takes a long look at you. Her eyes feel like they’re boring into you tunnel digging robots.

Now it’s the amusement park, Wonderland. Tt was just a

The dog stops to take a crap. That’s when gets to the point.

Thank you for all of that. I’ve fixed those. I’m currently working on getting two more chapters debugged and uploaded but I’ll take another pass in a day or two when I have a fresh set of eyes.

Pls fix the error. I havent finish the demo yet 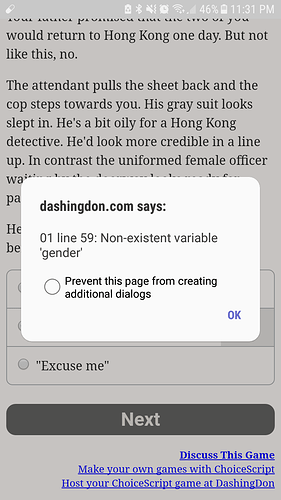 I got an error when I chose my gender as female/chose to be called Ms.

also Mr Mx. just a few minutes, it was fine.

Ouch, fix one problem and create another. I fixed it.

there is another error at gun prodigy choice

Thank you. I fixed that and did a new randomtest, looks like it works ok now.

Finally, some Asian shit. I had just about given up on expecting this kind of thing. Thank goodness for this WIP!!!

The Mystery Baby Momma’s name changed from Black Fan to Black Nun over the course of the last scene.

Also, it seems a bit early to be falling for anyone, Baiyu in particular.

Great story with an authentic feel to the whole Asian action movie scene you said you were going for. I wouldn’t get too concerned with the typos til you are ready to put it in beta testing, but that is the only real issue I encountered. There will need to be a lot of proofreading done by the beta testers, but everything else looks amazing. I will be keeping an eye on this work and looking for its release. I, however never beta test as I feel it kind of ruins things for me. I will buy the final product though as the demo is just too good.

Reminds me of the game Sleeping Dogs with the whole Hong Kong Triads theme and avenging your family.