It is 1650 in England. Five years have passed since Queen Charlotte I’s Royalists triumphed at the battle of Naseby. The parliamentary figureheads are dead, imprisoned, or scattered to the wind. Yet suspicion and paranoia still grip the nation. Hexfinder General Matthew Hopequins insists that hexcrafters and rebel exiles still plot the queen’s downfall. Others question the queen’s religious sympathies, and see Pontifex plotters around every corner. To the north, on the outskirts of Newcastle, a Royalist army sits in stalemate with Scottish forces.

You will play a hexfinder in the employ of Queen Charlotte’s Anglican Church, tasked with seeking out the witches and warlocks (colloquially known as hexcrafters) who threaten her fair nation. It is June, and the summer solstice approaches. Charlotte announces her intention to return to Oxford, her seat of power during the most turbulent years of the civil war. Assigned to investigate the Oxfordshire villages along the queen’s route of travel, you will begin to uncover signs of heretical treachery at the heart of your sovereign’s court.

That’s all fine, but when can we play some WIP chapters?

Right now, in fact! If you missed it at the top, the first eight chapters are playable here.

This playable portion will expand as I write new chapters (more updates to come!) Current total word count is around 420k, and a single play-through is 90k or so in length.

I also wrote Mask of the Plague Doctor in 2020, in case you’re enjoying this WiP and thinking “hm, did he do anything else?” 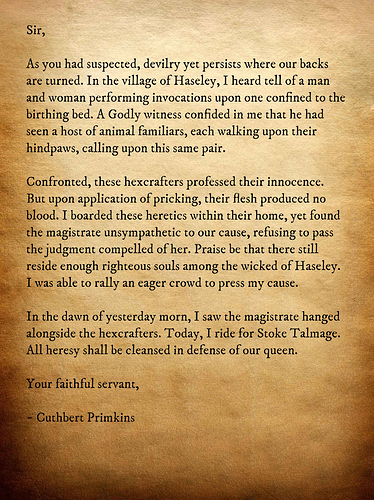 What’s this? A new letter from Primkins?

Yes, please! All of that!
I have a special place in my heart for stories about misguided, unsound medieval justice. 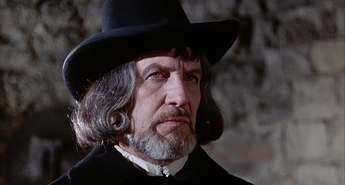 Absolutely no heresy here, sir. Er… pay no attention to the gentleman in my living room. 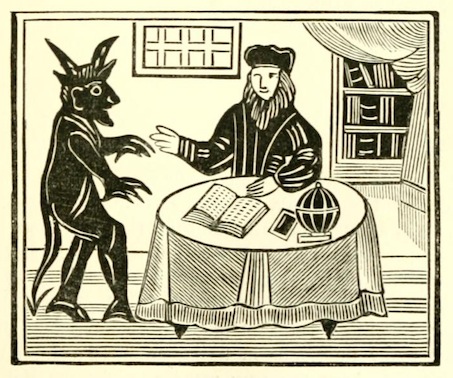 I watched that Michael Reeves film earlier this year. The ending is … quite something.

Exciting!!! No heresy here, no sirree.

If you ever get the opportunity to be a ten-year-old boy with a small black and white TV set hidden under his bedclothes for the purpose of illicitly watching a late-night movie without his parents’ knowledge, then let me tell you from hard experience, do not choose that movie!

By the way, is that man winking at a demon? There must be something in the handbook about that…

I think don’t sleep with the demons is on page one, but what can I say I have a soft spot for rule breakers. And demons for that matter.

What means of deviltry be this!? A missive from Goodman Primkins to the Hexfinder reproduced in digital facsimile?!

Demons? I see no demons … that sounds like heretical talk to me.

Have you read Pym’s latest pamphlet? She’ll tell you what’s really going on in this country. 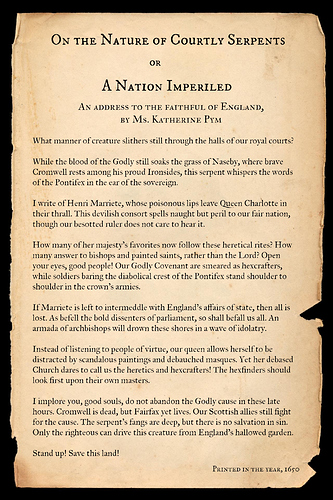 All I can discern is that it somehow involves demons, Charles II and Scottish Catholics.

Or I could be wrong. Won’t be first time though.

Dear brothers and sisters, I have a confession to make.

For a time I have struggled with my duties as a hexfinder. Never once have I doubted that our cause is just; but out here in my small province one tends to forget how great the threat of heresy truly is. Surely, I thought, those hexcrafters are merely lost, misguided souls. Perhaps poverty and misfortune drove them into the arms of the devil. Do they not deserve our mercy? Do they not deserve our guidance? Are they truly all so tainted that the light of our Lord can no longer reach them?

I have doubted. I have hesitated.

But no longer! This pamphlet we have found contains not the mad ravings of a desperate person: It preaches sedition, spreads misinformation and insults our sacred order! I will not stand idly by while sinners like this Ms. Pym lead the good people of this country into ruin! Let them hang, let them burn, let the holy fire cleanse their souls! Justice will be done.

@KP_Paul That zealous attitude will serve you well in these troubled times!

First post is now updated with a full game summary and my best guess for when this thread will turn into a ‘proper’ WIP with playable chapters!

Hope people have been enjoying the background documents - I’ll try to keep posting a few of those when time allows.

But aren’t the Anglicans the heresy to begin with?

That’s it, only ever referring to romances as “thoroughly heretical smooching” from here on out.

And definitely loving the background documents!

This is a big mood for me.

Do you guys know about the “I am an Anglican” song in the UK? Episcopalian youth groups sing this in the US to the tune of “God Bless America”:

@PParrish Is only capable of writing games where the PC has a piece of elaborate headgear.