Learning how to better use your powers, for example.

A fire user could make the particles to move faster, generating more heat, or if we don’t want to enter physics department, we could just he’s concentrating more energy in one point making the fire hotter (changing the flame color and so), concentrating a big fireball in a really small fireball and letting it explode at once, to generate a big boom.

Water user, could get better at making things colder, or making the water jet faster, or more pressurized to make more dmg

Earth users, same idea, but it would be a defense oriented concentration, but he could make a really hard bat, or a cage.

Shadow user name would be eviroment dependent to make more dmg, but he would get a almost infite potential in dark place, he could move faster, create wall, cages, weapons, everything from shadows, but in light place he would get less shadows and less powerful.

Light users, same as shadow, but instead of getting solid objects like weapons from the power, they would get explosive powers similar to fire users, more light, more power. (Shadow would be more melee focused and light more ranged focused).

Psych would get dmg proportional to the will stats (20+will) or something like that.

All the power could be unlocked with train, for example, we can’t say a wind user who didn’t got the fly power, at the start, would never learn how to fly by himself, right?

That is my ideia, you can use some parts of it, or none of it, only suggestions :).

Ps: ranged attacks (like rays) would all get the marksman bonus, same with melee.

The thing with implementing cheats is that, when the player is using them, they will need to feel like they are actually cheating. There is really no point in implementing Cheat Codes, if it doesn’t feel like the player is actually cheating. However, this is purely optional and it literally disable all kind of achievements. When it comes to cheating, I think the author of Breach: The Archangel Job is spot on with those. The codes allows you to max out all your stats, but they disable all forms of achievements. If you really want to save yourself a lot of trouble, you can also simply implement some kind of master code, that will allow you to open up a cheat menu. This way, you do not need to implement tons and tons of codes.

After reading back a few posts, it looks like you have satisfied us cheaters quite heavily. Looks like my advice would not be needed. Well done once again.

One thing I didn’t like about the intelligence power was that we could either go batman or ironman, maybe a blend of both with the suit integrated weapons and all that stuff, but I was expecting we could be something like generator rex and blue beetle, as in they are living technology, a technomancer in all its rights, let’s say we could make a hero suit that’s bio-mechanic, so it does not need to be given computational instructions but it rather functions on your thoughts alone, so it responds immediately and for example you could make gigantic blades out of your suit(your arm becomes the blade) or you could make a mechanic shield using both your arms, develop mechanic wings out of your shoulder blades, turn your arm into an energy cannon etc… basically turn yourself into a cyborg with way more imaginative options and given your intelligence, no drawbacks as in the second book, for speed purposes you could maybe develop a vehicle, or do something like ishida does in boku no hero as in he can span nitro tubes from his arms and legs so he can move faster using instant acceleration, a good example of what I’m talkinf about would be the anime inuyashiki or alita battle angel

Nice it’s good to see someone else who likes generator rex and battle angel alita, those series are definitely underrated, i also like the idea of armor that responds to thought that idea has been in my head for awhile too, but i was thinking more along the lines of the mjolnir armor in halo than i was blue beetle, but any of them would be awesome additions to the game.

I have just one more question regarding Cheat Codes. Will we be allowed to enter certain codes multiple times? For example, I would like to be able to use the money cheat as well as some of the power cheats.

The only reasonable suggestion I had was giving the animal powerset some form of acid spit. Even if it’s like those little dinosaurs from Jurassic Park where it’s only useful to stun targets at close range. I’m mostly trying to think of more animal powers and that’s the best I had

Unfortunately, I haven’t played in a while and waiting for update. As to powers:

Name: Liquid Form
Type: Water
Cost: 250
Changes body structure, enabling phasing through locked doors, and small cracks. In combat enables automatic dodge of physical attacks for 3 turns, but since water is one of most chemically active substances, it other types of damage (electric, laser, chemical, acid, poison or other) are twice as effective

I could do more powers for water.

Inspire allies, achieve angelic beauty and attributes. Gives character 60 psyche, 60 agility, 20 strength and boosts positive relationship with positive and some neutral characters. Of course it makes you a target too.

Name: Optical Illusion
Type: Light
Cost: 200
Light is all about perspective. How others are seeing you. This power is battle aspect of that. You can create illusions to confuse and disorient your opponent, and hide yourself. Though it takes time to weave good illusion.

Just like with Angelic Aspect, but with evil or some neutral characters.

Name: Darkness Tendrils
Type: Dark
Cost: 200
Damage: 50-100
You know those Darkness comics, and Lovecraft Mythos? Well. As monsters and antiheroes of those, form your dark powers into tendrils coming from your back, arms or whatever. It takes time, but you could use them to strike fear, constrict or even wield multiple weapons. Or simply attack with those. Can be used outside of battle for multitasking purposes.

Name: Earth’s Flow
Type: Earth
Cost: 200
Imitates flying by forming ground beneath your feet to rise, and transport you. In battle can by used and canceled on enemies to cause high falling damage.

I also propose more animals for beast form.
Also would like to propose new power types: necromancy, magic/astral, and art. The last one can be confusing, but we have many examples of portraits, drawings, writing, or singing being used for offensive purposes in popculture.

Hope my ideas aren’t to complex or OP.
Hopefully next update will happen soon. Thank you once more for including my ideas

Hero or Villain: Genesis was updated to v.1.4.0! A list of the changes brought in this version can be found below! (also see the video in the next post about the cheat codes).

-A number of other new power added (for playtesting only).

-Added options on villain path to kill some opponents.

For a list of the cheat codes that were implemented, please watch this video: 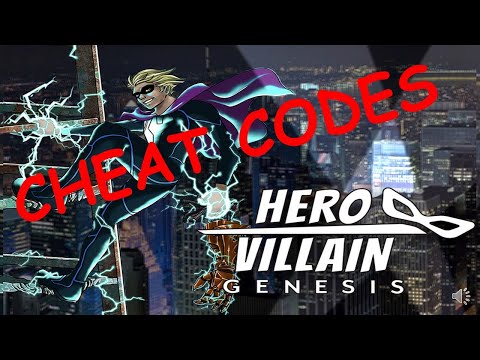 Is it updated on the Google Play Store?

Hello! just a mini heads up, I don’t think the megabooster(adding hero points) cheat codes work due to #of points being allocated upon selecting difficulty level & the option to input cheat codes only comes up before you can start the game

It may be just me, but after using touchedbymidas no other cheats are aviable.

Despite the powerbooster and megabooster codes currently not working, I really like the way these codes are implemented. Because of this, we are now able to create a real versatile cheat character Who is both financially well off and powerful. Brilliantly done for a start.
To those who want access to all powers, make sure you enter playtestersareheroes before entering AllForOne exactly the way it is typed here. Note that this may have funny consequences, so let’s all help to report them.

Yes you are correct. If you wish to use other cheats, use them first. Always use touchedbymidas last, or simply enter something wrong on purpose to get back to the start menu.

For inventor I can’t seem to improve the power armor’s defense anymore once it reaches 40 and above.
Also, I have been trying to get this “former_hero_turned_villain” thing and it’s literally impossible.

Just be extremely careless with your money. When it’s time to help your mother with her cancer treatment, make sure that you don’t have the money. Later in the game, you will have the option to rob a bank or do something bad to get the money for her.

It’s for my current playthrough (though I will be replaying this if DLC will come out):

I checked that you can romance with your boss once. Could find out how in game files, but maybe someone did this, and could write, when exactly it starts, and what you need to do to finaly ask her on date ofter convoy attack.