And could possibly rival either the Elders and/or Lanista.

I don’t think that we’re anywhere near there in Book 2. The Elders and the Lanista are on a whole nother level from a thoronium seedling, and that would go double for any AI we build. Little fish, big pond.

There’s a lot of powers that arguably might fit more places, but are put in different powersets either for flavor or some sense of differentiating between the powersets. (Teleportation and invisibility can also be found under shadow powers, btw.)

Furthermore, what an inventor can do is still limited by being an Earthling. Some stuff (like nanotech) is not available to inventors yet because even a powered inventor doesn’t have the background to design Level 6+ technology - that falls under Alien Technology.

I need more Inventor Ideas for all books

Do only I experience game crash after choosing power type (shadow powers in my case) after using cheats?

EDIT: Think I found reason. There are new DLC codes for playtester code users. But if you use all of them to much, it will collide with choosing your weak and strong sides in intro. It is best to leave at least one attribute unchanged by „stone” code, so it will become your weakness

Has anyone got „Lord of Wall Street” achievement, and has advice, or guide, how to get it?

@adrao hey so i just decided to remake one of my first characters and play on hard without cheats, and i was wondering if you could add a first aid skill in the miscellaneous power section, maybe something like,

Will there be a 3rd book

Sorry that I haven’t replied here for a while. I do read everybody’s comments and will reply individually to everybody as I always do when I get a chance (currently doing fieldwork for my main job in areas with poor internet connection, so I haven’t been able to work on any of my games for a while). Hopefully things will be quieter in March and I will be able to update the various HoV games, work on book 3 and also on another WIP

Anyway, I like many of the suggestions and comments, so I will do my best to put them in the game eventually!

I have to ask you something. What superhero franchise is your favorite and is referencing the HoV series, DC or Marvel?

I wonder. Should emotional control be added to the list of available vampire powers?

In vampire lore they usually tend to have some such powers so i don’t see why it couldn’t be.

Again, apologies for not replying to people above (will try to do so soon). I’m at the end of my fieldwork, which took me to one of my favourite islands in the world, Bohol, which serves as the setting for the “vampire path” within the game. I took a few videos of one of the locations, and quickly put them together so that you can see what the place looks like! 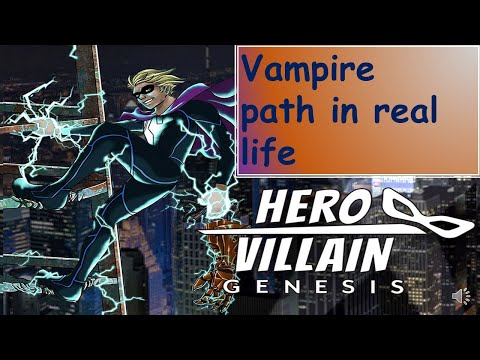 Hello everyone, after a long time, i finished the game with my hero inventor, he’s weak, it’s the best i can say about him. While it was an interesting run, i don’t recommend it at all, and this was while having “extra luck” (i reset until I got the best one) in the upgrades. My villain would eat the hero one as breakfast.

Congratulations on doing it. What difficulty level, out of curiosity?

I did at normal and tried at hard, but at hard he gets weak to an annoying level for me XD