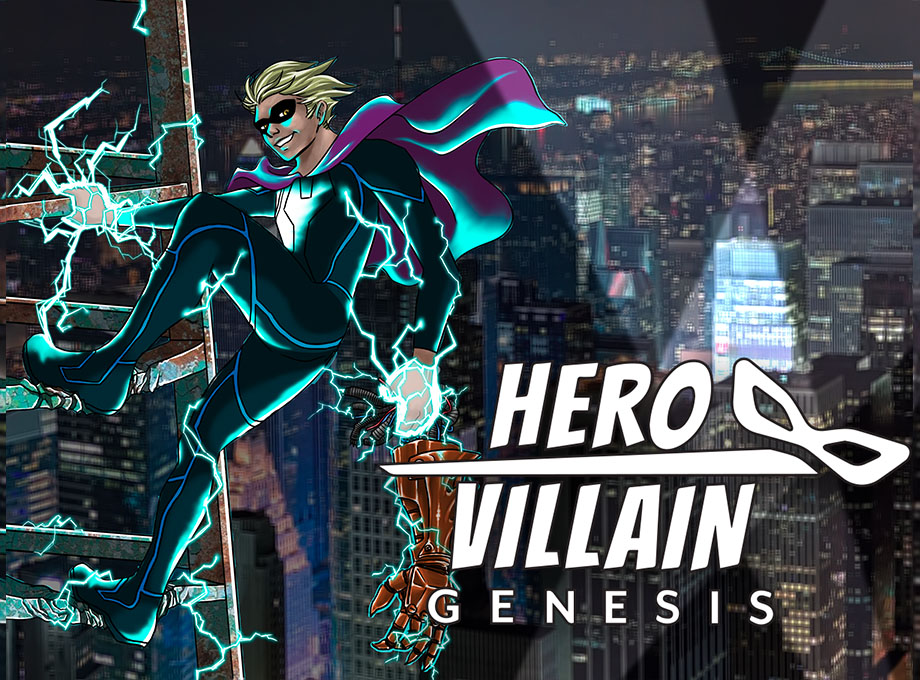 This is the former WIP thread for Hero or Villain: Genesis, which now serves as the discussion thread for the game.

The game was released on the 19th of September 2019. The first update to the game was submitted on the 17th of October. List of changes is given below:

-Added option to be able to train superhuman strength by lifting train carriages (only available once).

-Added side mission on villain path, allowing to attack a police station.

-Three new options of things to do in the evening to increase your psyche (meditate, go and pray, and attend a yoga lesson). Note not all are available at all times.

-Possibility of second “date” with Lyron and Emily.

-New options in some fights.

Thanks to everybody who gave feedback. Hopefully I can continue to update and upgrade the game in the future!

-Numerous bugfixes throughout (thanks to all those who reported them!)

-Added extra options regarding what to eat in Mongolia.

-Added extra options in places for those with high agility.

Thanks to everybody who gave feedback. Hopefully, I can continue to update and upgrade the game in the future!

I like the wide range of choices for powers etc. Here’s some issues from the first section:

The character creations screen should update after selecting powers so the player can have a running tally. They should also have the option of starting over from scratch or untoggling prior choices during this process. 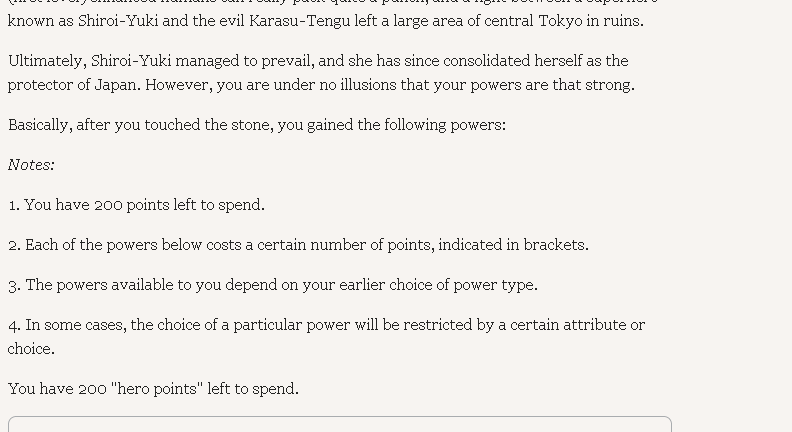 I noticed that the “rewind time” power wasn’t displayed on the stats screen as well.

Oh, and the “stare at the sun” part to calm down made me laugh, as I figured the MC would be blinded by it.

(I’m in Italian class, I will note down my remarks and report them later)

Always a bit irked at ‘powerpoints’ when it comes to superhero/magic stories. YMMV but having a genuine Mana-bar kinda always rips me out of the story. Has anyone ever used exhaustion percentage instead or something?

So far so good I still didn’t finished the demo because I stopped midway but can you add a little more fight scene with the first encounter with the steel astronaut, because I feel like it’s too short and the scene where steel astronaut escapes is with a smoke bomb since my charaacter have an ability to teleport, wouldn’t it be good to teleport in front of steel astronaut to stop her then initiate another short battle?

Selecting Invisbility from the Shadow power set spends the points, but doesn’t seem to give you the power. It doesn’t show up on the stats page and you can keep selecting it in till you run out of points.

My first impression is that the writing is a little stilted. It’s structurally sound, and cleanly formatted (so miles above a lot of works), but there’s no flavor to the voice, you’ve got a lot of places where things are too wordy, and some places of redundancy. This isn’t a problem now (You’re still in your first draft), but it’s good to be aware of it, and try to correct the habits:

You had a great time, and were about to return home when a glowing bluish stone attracted your attention. It was mesmerising, with its pulsating life immediately attracting you towards it.

This is redundant here, for instance (You’re attracted to it twice). You could probably change the second sentence to: “It was mesmerizing, pulsing with life.” (or however you choose to word it). We notice it with the first sentence, and find out what’s fascinating in the second without repeat.

As you touched the stone you felt as if your entire body had gone on fire, as energy raced from the stone into you.

Had gone on is clunky. It’s taking the past tense a second step back if that makes sense.

Here, your body was on fire. (Or, to make things more personal, “You felt your body burning”).

Your conversations with people also feel a little stilted. Frank and Carol seemed like they were reading off a script. Everyone talks in different ways, and while you clean up a lot of it when you write (People say “Umm” and “ahh” and flub grammar way more often in real life), you still need to present that in your story somehow. Usually, a higher concentration of contractions and sentence fragments (unless the character is expressly trying to impress somebody/is still getting comfortable with the language), some occasional dialect shifts (Don’t overdo it, because it gets grating or confusing, but there are a few slang terms people will throw around in casual conversation)

For instance, I speak like a hick unless I’m trying to impress somebody (I tend to use “gotta” when I’m posting on here, which reflects that). When I ask people “How was your day?” It comes out something like

While a waitress at a casual diner (I live in Pittsburgh) would almost definitely greet you with:

“How are yinz today?”

And someone more enthusiastic:

“How are you today? You look so good!”

Frank and Carol seemed like they were reading off a script.

I have this impression with the captain as well.

Edit: Oh, and I’d like to have some more orientation options. I always go with “like all genders”, as it allows my MC to get a greater number of ROs

Is it possible to romance the y’all red head or turn her good? Powers do feel very varied and I think there should be more interaction with the captain as it’s just saying what appeals to her and nothing else. No sense of real friendship or even possible romance. Villains so far seem more than typical villains like steel aeronaut gets better each encounter and the same moves won’t work the same way twice. Also the personality choices seem limited. It goes from typical good guy to neutral to jackass. There no set personalities like brooding, jokester or anything else. Add a little more variety. Otherwise it seems interesting like that it feels more like a game than with the points and the way your powers work and how you use them.

I managed to make the Steel Astronaut flee, though the captain tells me I “defeated” them. I wouldn’t call it a “victory”.

I could suggest some edits to the dialogue, if you are interested, in order to make the characters more “believable”?

I really like the numerous power options we have, though. I don’t think the “Time” powers were present when I judged it for the CSComp, were they?

Edit: During the second fight against the Steel Astronaut, we have the option to fly and pick up the stone. I don’t think my MC is supposed to have this power, although he could have had an option to teleport to it instead?

It is nice! I dunno if somebody mentioned already, but you have a mistake in the beginning. When you speak with the detectice you have three choices. One is ‘tell me everything about me’ i am sure you meant him.! By the wy amazing thing

I just finished playing it and I can say a few things.

Ex: a journalist would have to edit interviews, do some research, and/or decide what to keep/remove/censure?

Honestly speaking, the time-based power seems kind of underplayed, the only power it brings (rewind-time) is also quite detrimental to use. It just feels wrong having time-based power without even being able to speed up, slow down, or better, stop time. Time manipulation is actually by far the most versatile power imaginable (well, to me at least), e.g., can you imagine how devastating it is to be hit by a stick that has infinite speed? (assuming ‘v = s/t’ of course, and in this case ‘t = 0’ because there’s no time that has passed, because, you know, you’ve stopped time?) You could also just muck about and change anything’s position (Because if there’s no time-flow, no forces in the universe exist! No gravity, no mass, no resistance, no heat…nothing! At that point in time, snickers, everything is unbound from the rules of physics, well, maybe not you, so you could just pick up anything and change it’s places without much effort because it has no weight, yes, you could even pick up lava without fear of getting burned because without time flowing there will be no heat exchange), or if that’s too OP for you, how about a localized time manipulation?
Like encasing something in a ‘time-bubble’ and manipulating the time-flow within the bubble? With how large and much the bubble you can create being directly tied to how powerful you are? Surely this is something that can be done by a ni-kyu powered human that has time-based power? We’re powerful enough to rewind time, aren’t we? Rewinding time affects the whole universe, I don’t see why we can’t affect the time-flow of a 5x5x5m area.

Sorry for the rambling.

First, I really enjoyed it.

Now, here is what I found:

Encountered something odd in the first Steel aeronaut encounter

Why does time have pyrokinesis?

I can generate manipulate the shadows to engulf my opponents in darkness (Dmg: STUN) [50]

This doesn’t go away. *Note I cheated to have enough points for the latter two.

I hate to campaign for removing something but Mind Control poses a problem. Just now my boss was yelling at me when I realized I could just mind control her into giving me some space. Or get fired trying. And I could do the samw to most anyone. Not having the option actually mucks up my immersion.

Well two issues that I saw.

The game seems to assume my character was gay for some reason. When told about Fred dating the office schmuck there was no option to not care because you aren’t interested in guys.

And while superheroine taking time out of your job makes sense, considering that I was playing a lawyer with enhanced charisma and intelligence, my work being substandard doesn’t really make sense.

A more logical issue would be that the frequent absences make it look like you don’t take the job seriously, or your coworkers resenting you for making them look bad despite seemingly halfassing it.