Coming up together like you said makes it more intimate and playing the underdog/rising star to take down the antagonist/protagonist in stories is done all the time. But coming up alongside them is just way cooler cause you can have those points where they win/you win actually be interesting and have the player be surprised with say maybe some new tricks the hero learned and vice versa.(Also may be more trouble than its worth but could have the new tricks the hero come up with be different depending on what the villains powers are, or atleast their highest stat power/ability.)

I feel it would also still fit whatever kind of relationship the player chooses to have with the hero. Either way I trust you to come up with cool stuff!

Both of these ideas are good but I prefer if we both start as newbies. We get a better feel for the nemesis especially when they first meet. That is ripe for drama that would like to see

I think Author already said that there wont be an actual mc X ae romance. maybe our mc can be obsessed with ae but thats about it.

I kind of agree with that. I don’t see romance being a thing since who could love a villain like the mc especially if we picked the alien. It doesn’t really tie in with this game

“I’m sorry team, but that Intimate:99% arch-enemy got me acting unwise”

Yea I agree with you. Not only it would not fit in most cases, it would add a massive problem to an already heavily customizable game and its not even adding different arch enemies archetypes that author wanted to add back in a day.

Not much of an arch-nemesis if you secretly care for them. I mean, I guess it could still work, like Telltale’s Joker being best friends with Bruce before turning Joker, but I prefer the traditional definition of an arch-enemy: your ultimate enemy. One that could never get caught up in emotions regarding you. One you couldn’t simply manipulate using a relationship between you as leverage or an aggravation. One who would kill you with barely a second thought, or who would gladly lock you up and throw away the key, walking away with a smirk on their face, ignoring your cries and pleas through the bars of the cage.

An ultimate opposer. Your greatest adversary. The antithesis. Such as Spider-Man and Green Goblin, or a more classic Batman and Joker.

While you’re right that you can’t be an arch-nemesis without hating each other, the actual state of the rivarly must depend. You can’t exactly compare everyone to batman and joker. For example,a a classic villain might decide he wants to force his nemesis to see him take over the world before he throws him in the pool of sharks, rather than killing him without a second of boasting.

I mean, you’re going on a literal autobiography to your enemy in real time, that’s the plot of the game.

I mean, you’re going on a literal autobiography to your enemy in real time, that’s the plot of the game.

I was stating my preferred type of rivalry, rather than trying to state something objective about the nature of an arch-nemesis.

I suppose it depends on the MC? I can’t really see peaceful MC’s having a Joker and Batman type of rivalry.

I really like the idea that the arch and PC ‘grow’ together. Not only can it be more disturbing if the PC takes an ‘interest’ in their enemy, but it can also be really nice to see that dynamic we don’t see often in superhero media. Most villains just kinda happen and while they get stronger or weaker as the story demands, they often don’t stay on the same power level as the hero.

The kids are back in school and that means my butt is up at 5:30 in the morning, and THAT means that I am at the dining room table by 6:30 with a somewhat quiet house (with a schnauzer in the house, the concept of ‘quiet’ is always modified by ‘somewhat’).

Knocked out 700 words of Mission #2 today and plan to knock out another 500 words over my lunch break. The goal is to get Mission #2 finished and uploaded by Friday.

Oh…and the results from my Twitter poll the other night. I can always depend on you folks to be 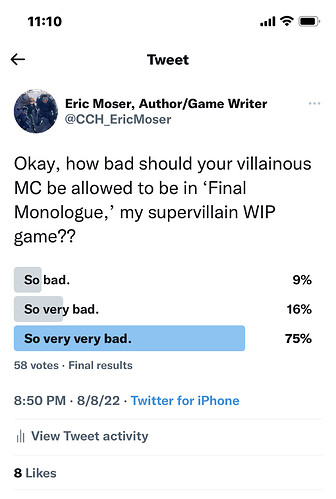 Can’t wait to shoplift grocery stores and not pay my taxes.

I need to save that top tier stuff for Part 2.

Could we get more dialogue options that make the MC feel more like they have an ego or treat themselves like a big shot, when interacting with villains and heroes. Like if were getting mocked for being a newbie we could get a few dialogue options like “I’m sorry, maybe your a little confused cause you don’t seem to know who your talking to, I’m insert MC name” or something similar or “Maybe you’ve been living under a rock cause I’m a pretty big deal.”

Yeah, your MC really hasn’t had many opportunities to interact with others, but that will change with the bar scene, which will happen after Mission #2, and which is being reworked again to give your MC more flexibility. The goal will be for you to do anything from have a drink (or three) and make a new friend, get into a bar fight, try to steal from other patrons, etc. I think it will be fun and you will have chances to be bold, cocky, humble, reserved, flirty, etc. (by then, I can also run some stat checks for variables like Legend Points, Funds, etc. that can come into play too).

And Putty Queen will show up (I should have official art of her soon), but I’m pushing back introducing her crew until later in the story. It was just too much too soon, as some of you pointed out. Introducing characters more slowly makes more sense.

This concept definitely appeals to me so I decided to give the WIP a go. I ran into something pretty quickly that’s a bit confusing though - after selecting the Technology origin and the battle suit, it says “My battlesuit, my very own creation…” but then in the next paragraph it mentions sometimes “adding features the original creators were too short-sighted to install.”

If the MC is the creator of the suit I’m not sure that makes sense. Maybe the implication is that he created the suit based on stolen plans or something, but if that’s the case I do feel like it could be made a lot clearer.

Good catch. I appreciate it.

And I needed to tweak that section because I realized that I can’t really accommodate MCs having “powered suits” anyway, as that would imply MC has a lot of built in protection/defense, which is not the case at all. Some players might (rightfully so) be like, “how can the Cartel guys even hurt me?”

So I’ll switch it to either gadgets and…hmmm…tech implants or something, just something other than armored suit.

(This is one reason I’m thrilled to have a public thread; you all are helping me improve the game as I go, instead of me moving forward with mistakes and then having to fix a ton of things later).

Yeah, I definitely think tech implants/augments would make more sense with the available powers than an armored suit. Seems like a solid idea to me!