It’s easier than I thought, thanks!

Is there a public discord?

Why is this option greyed out? 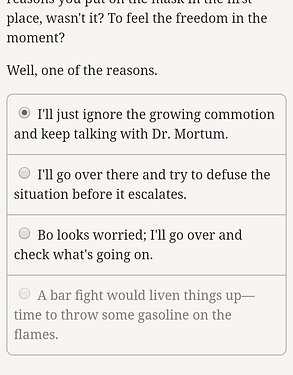 I believe it’s because daring is below 50.

Me again with a question

How to unlock scene where mc found out about puppet’s dreams? Once I managed to get it but now I tried with the same choices and every time MC urges Ortega to stay in bed. I’m confused.

I think the only reason Ortega doesn’t visit Puppet if chose Strength enhancement for the armor because Ortega gets too injured and needs to stay in bed. But otherwise, I think Ortega should visit the Puppet (if i remember correctly)

maybe it’s something related to the puppet’s individuality then? I remember there’s some variations if it’s high enough

Hmm i know that Sidestep can tell to Ortega to stay in bed, but that doesn’t mean Ortega actually will do that. Was Ortega at Puppet’s bedside when you shifted to Puppet?

From what I remember Ortega insisted to go so my MC followed him…there was a short conversation in the elevator (mc could kiss him) and then MC moved into puppet body and there was Ortega.

Yeah, that’s one path to getting Ortega visit Puppet, but i remember in two playthroughs I had, both Sidesteps visited Ortega first (with Ortega not getting injured badly) and hugged Ortega for goodbye (did not get the option to help Ortega to sneak out to see Puppet) , then shifted to Puppet and Ortega was there waiting for the Puppet to wake up

Hmm
What exactly happens in the hospital scene in the playthrough where Ortega doesnt visit Puppet?

Nothing interesting. Mc wakes up in a puppet and you can sneak out of the hospital or ask a nurse what happened.

Hmm
I’m still confused, I’ve understood Ortega only won’t visit Puppet if they are too injured and that I understand only happens if you have strength enhancement…