A legal-ish mystery in a kingdom of monsters

Expanded damage mechanics! Now you can feel the sting of every failure as it happens! Lose (or gain) Confidence in a variety of situations. Keeping Confidence high throughout the game will be harder, but you can now exceed 100. How high can you get? And like before, toggling Story Mode on prevents a Game Over from damage.

6 save files! I made the number bigger! It said more than 6 isn’t recommended, though, so that’s probably the best I can do.

There’s a chapter select to skip right to the new stuff. Current word count is 48,000!

I also re-did some of the post-trial stuff based on feedback from here. The new content is clearly labeled, so you can’t miss it.

And introducing: You can die! Run out of Confidence, and you’ll get a Game Over, just like in other lawyer-adjacent games. No worries, though, you can toggle Game Overs on and off if you’d prefer to relax.

Whew! I think I have a decent idea of what it’ll take to make the whole thing. I plan on forging ahead.

Please let me know any thoughts you got. Something reads weird? Difficulty too high? Nonsensical logic? I can fix it.

Hello CoG Forum. I’ve got something a little odd for you.

I’m interested in making a game that I call “Evil Justice”. I’ve written the first chapter, which is about 23,000 words (although much of that is unique failure dialogue). It takes about an hour to play through.

The game takes place in a kingdom of fantasy monsters. The player is quickly drawn into the kingdom’s off-kilter legal system, and must defend their innocence with clever arguments to survive.

You can play it here. You can try to solve the case with the best possible score (your Confidence, displayed on the stats page and at the end of the game), or you can deliberately pick bad responses to see the unique failure text. In its current form, you can’t die by losing health, so there’s no penalty, but you may want to try for real to see if you can get a good score.

Please, let me know what you think. The game mechanics are based on the “Ace Attorney” series, but with a Choice of Games twist. I’m not sure whether this kind of game is welcome here, so this is my first, most important test: Based on this first chapter, should I make the full game? I expect the full game to include four additional chapters in a similar style.

I’m interested to hear any feedback you may have, but I have a few specific questions as well:

Difficulty: The original concept would have the player die upon running out of Confidence, which would cause the player to lose some progress. Is this actually a good idea? I’ve been considering otherwise recently, and the score system is my current compromise. Should there be a toggle, so players can put pressure on themselves, or ease off as they prefer?

Alternate Paths: Choices with meaning are a vital part of Choice of Games, so I’ve included some that wouldn’t be present in an Ace Attorney game. In the first chapter, it is possible to leave the Ring early, which continues the story with some relevant changes, but can skip half of the gameplay. Is that fair, to offer that choice to an unknowing player? They might skip a whole bunch of core game.

Romance: There’s none yet, and I don’t know if there should be, due to the nature of the player character. Is it even right to allow a one-day old creature to be romantically involved? Would there be issues with power imbalance? The player has many of the memories of an existent person, so it would probably be fine, but I’m not certain. I’d be fine with not having romantic relationships in the story, but I understand that’s a major draw of Choice of Games for some. Is it important enough to make sure I add it? I can, if need be.

I’ll take any feedback you got. I’m 100% ready to spend several months writing the whole game, but I have to make sure it’s worth doing. If not, I’m prepared to shift gears, but I have to know first, and this is how I’m checking.

Thank you for reading. I hope you have a good time with Evil!

Can u tell us a bit about what game is about

Oh god, I forgot to include a basic description. Thanks for the heads up, I’ll edit my post a bit.

As for the romance angle, I’d say leave it to the player.

If the player finds romance problematic, than it’s simple enough to not do the romance paths, after all.

Personally, in cases of nonhuman intelligence, I read a character being “of consenting age” or not depending on their mental and apparent ages. Or in other words, a one-year-old robot might well be okay to romance when a hundred-year-old elf wasn’t.

You’re not writing a pedo-fetish novel, so just write what you’re comfortable with.

Hey, blur that name out! It’s a spoiler.

But anyway, if you’re stuck on the fourth statement “I Got Nothing To Do With This” there’s a trick to it, you have to Question the third part, then Challenge the second part. One of the responses will turn out different after getting info from the third part questioning.

If you mean something else keep me posted.

I agree with your point about romance in this game. While most wips are good having it, I’ll give it a pass because the mc is basically a new born so it wouldn’t be right in a lot ways.

Unless u add a time frame of the mc growing up to a appropriate age. If u do that then I’ll suggest u do it.

Oi there @Deeborm are you gonna add save feature?

And I too agree with the opinion of having Romance in the story, although it’s okay either way it is okay for having Romance cause the main character is technically not a kid/child and romance adds little more flavor to the story imo.

NEWLY MADE ADULT… not a new born baby…

are you gonna add save feature?

You mean the smPluginMenuAddon in DashingDon? I thought the demo was quick enough that I didn’t need it, but that might have been a bad assumption.

I’ll try to add it in real quick. I couldn’t get it to work at first: entering the code it told me in the place it told me just threw back an error, but I might have missed something.

Edit: Can’t figure it out, it won’t run the game with the save system on because “sm_init has to be at the top of startup.txt”… which is where I put it. I’ll have to do more research tomorrow.

demo was quick enough that I didn’t need it,

But it’s still basically the same thing through

Yeah, I wasn’t planning on adding more chapters without a save function to go with them. I imagined I would add a chapter select to accommodate players who have already seen one or more chapters, including setup choices for different mid-chapter branches, but that stops working so well after a couple chapters. There will definitely be a real save system in from chapter 2 onward.

As for the romance question, the issue I’m trying to avoid is a power imbalance between someone who knows about the world, and someone who doesn’t, based on the knowledge of the player character. The body they were given is adult (which I ought to make clear in the physical description in early Chapter 2), so the “mental age” is the question. Between the answers I got already, and the fact that I can alter the story as needed, I think I should be fine.

I’m actually not completely comfortable with writing romance, I’m never into it when it appears in games. It often feels rushed or forced. Choice of Games is different, though: romance is often a selling point. For that reason I want to take a fair shot at it. I just wanted to check for possible issues. You can expect any romance stuff I write to be slow-burn and based on mutual trust and respect.

If u feel u can do it then go for it. It will be good for experience. But the mental age shouldn’t be an issue if u found a way round it

I saw Ace Attorney and was ready to speedrun

The game mechanics are based on the “Ace Attorney” series 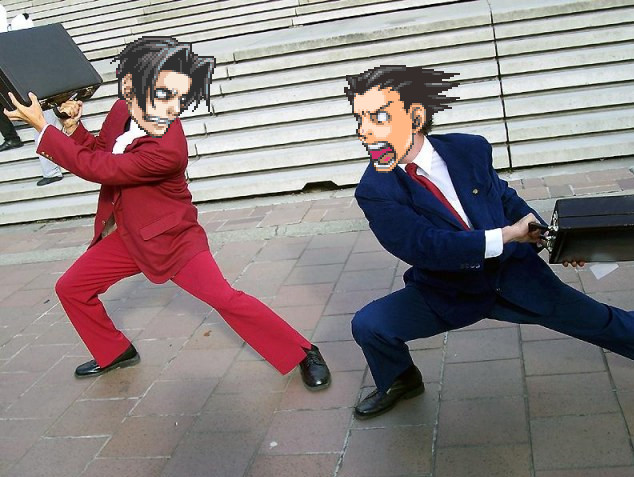 It’s not the image I was going to use, but I decided it was better.

You know, my central idea when coming up with Evil Justice was “I want there to be more Ace Attorney so I will make it.”

I first released a chapter as a Ren’py visual novel, which is still available here. It worked, but the art is pretty bad and I hated having to draw it. I ended up making a brand new case for the ChoiceScript version, so you can play the Ren’py one if you want to do another case right away. I might reuse it in this version later.

It’s best if I make something distinct, which is partly why the setting is so wacky, so I’m trying not to stick too closely to the Ace Attorney formula. Wrapping Choice of Games mechanics into the game is a good way to stay unique. But even so, “I want lawyer game” remains my strongest motivator even now.

I’m finding it fun so far! I’m always here for Ace Attorney-style games, and I’m excited to see how the story goes. The kingdom of monsters/“evil” creatures reminds me of Undertale, and it will be interesting to see that kind of setting juxtaposed with themes of justice and mercy.

About the save feature, I didn’t need it for this case, and I assume that your confidence bar will be restored at certain checkpoints/intervals. Which leads me to suggest that you might want to consider a checkpoint system as an alternative, although that might be complicated in terms of coding.

As for romance, I think it would be okay for the MC to engage in it. Maybe you can start small with the MC harmlessly flirting or thinking about possibly being attracted to X or Y character. Personally I wouldn’t mind the game having no romance, but then again AA had its intense rival/romance with Phoenix and Edgeworth, and people might want that kind of dynamic going into your game

Best of luck with the game!