Oh, I’m using Choice Script IDE since it’s much easier to use.

You can use regexes in the search functionality. This is a rather complicated use-case, so it’s not documented. But if you click the “*” icon in the search bar, you should then be able to write something like:

Which should only show results for Blaine that is surrounded by word boundaries (e.g. a space).

You can Google about regexes quite easily if you wish to know more.

Don’t forget to toggle this off afterwards so you don’t get weird search results later.

Unfortunately the current public version of CSIDE doesn’t have project-wide find and replace, but the beta version does. So if you’re interested in trying that out, please join the Discord: ChoiceScript IDE

Or try it online via ChoiceScript IDE.

Oh! Thank you so very much! This will help a lot <3

Is there a way we can undo using this 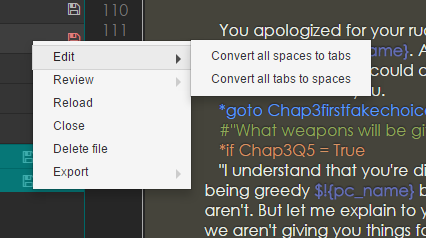 I was trying to mess around and explore the new update, and tried to click on that, But now all the indentation of If and Else along with fake_choice and choices are nulled

If you use undo (ctrl+z) straight after I believe it’s possible. Otherwise if you’ve closed the program or otherwise cleared the undo stack, I think you’ll be out of luck.

I’d be interested to have an example of choicescript code that it messes up though, as this sounds like buggy behaviour.

Just downloaded on my new computer and was unable to update to the latest version of CSIDEx64, see screen snip below. 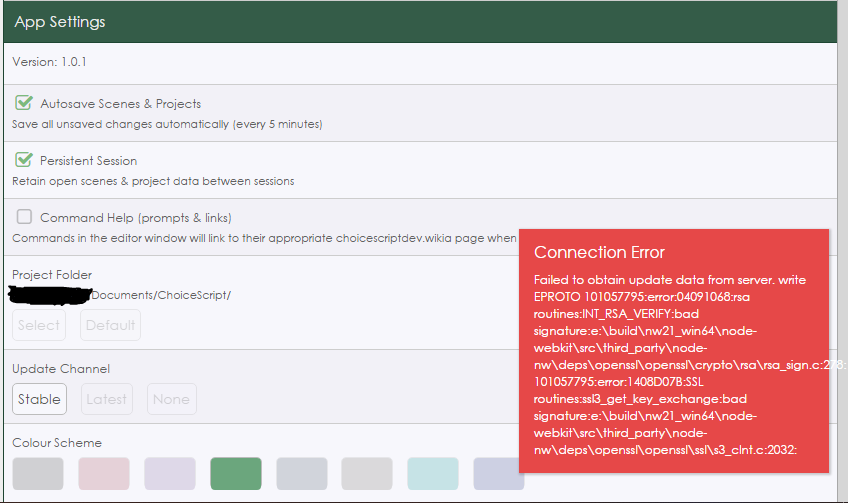 I have a question, does CSIDE flag bad formatting outside of commands? It looks like it only catches ${this and @{this, but not $this, $this}, or {this}.

The current release has minimal syntax highlighting patterns that can help detect some mistakes, but it’s definitely not all encompassing. The version currently in development improves a lot in this area.

I hope you dont mind if i ask you another question, i thought it better to ask here than make a new topic. I’ve come across a bit of a problem. Using your solution worked perfectly, except for the fact that one of my variables seems to increase everytime i enter and exit the stat screen. Now, i’ve done some testing and noticed that it only happens when using CSIDE and not when running the game through a web app. Do you know if this is a known bug or if i’m doing something wrong?

There was some cases where this little bug also happened in the compiled game as well. Its the famous “reroll” glitch.

I believe you can fix it by adding a command like a *page_break or a *goto just after the increment line but I may be wrong.

I moved your question to the CSIDE thread, so that @CJW or another can help figure out what is going on.

I’m sorry if this is a stupid question but could you explain what you mean by ‘increment line’? I am pretty new to coding and not quite sure what that expression means. And thank you for taking the time to try and help.

I don’t have anything to add here currently, it does sound like the reroll glitch to me (though should be equally present everywhere). “Increment line” here is referring to your *set command which is “incrementing” (posh word for increasing) your variable value.

Thank you so much for taking the time to explain. It seems to have solved the issue.