When I export the game, it doesn’t export “5-tracksloth”

This makes me suspicious that the file is no longer in the project folder. If you right-click the project headbar and click “open folder” (or similar) option, and make sure the files shown are consistent with what you’ve got open.

@lunawisp, yes I copy files over to my Google Drive, but I didn’t know why that would make the files disappear.

@CJW, yeah you’re right; the files simply aren’t in the project folder any longer. I just re-created them and they are fine. I was just confused about why this happened and hoping to avoid it again.

Perhaps I somehow inadvertently deleted those particular files while copying them over to Drive; that’s really my only thought now. @lunawisp probably nailed where I screwed up. But everything was backed up so no loss.

Thanks to you both for your help!

Is there any possibility of saving vars that are created via *create blabla 0
So that after restarting or exiting the game, then re entering it still exists?

I really got used to CSIDE, but i am struggling with the lack of methods to create even the simplest save or load features.

Since it doesn’t accept the save system that’s present on dashingdon.

There is no support for the save plugin, or equivalent, at the moment. Though it’s high on the request/TODO list. I might get some time over the holidays to look at an implementation.

I made an alternative desktop icon for CSIDE inspired by the Microsoft Office Suite. The light orange stands for the sand and the blue for the beach waves. 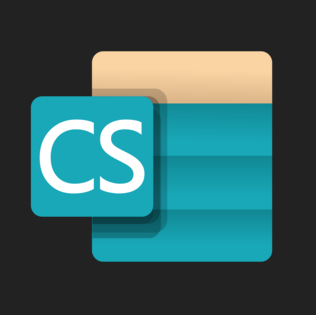 Explanation on how to install inside the readme file.

Good winds and see you by the CSIDE!

Thanks for sharing! I’ve added a link to it in the original post (lest this get buried for ever more).

Hi, I want to ask if is possible that CSIDE to have a mobile version(Android)? The web version is hard to use, and I want to use CSIDE on phone because I am mostly far from my PC.

Hi, I want to ask if is possible that CSIDE to have a mobile version(Android)? The web version is hard to use, and I want to use CSIDE on phone because I am mostly far from my PC.

CSIDE was not made for mobile devices. I dare say if it was, we would have option to download an APK already by now.

Web and PC usage. If you’re using web version on mobile. Then it is only natural it’s somewhat hard to use, depending on your phone screen size of course. Though i suppoes it auto adjusts?

But to cut it short, i’ve searched the forums and this specific topic for information about it. Couldn’t find anything that say’s CSIDE is meant to be used on phones.

Thank you for the answer, but would be very cool if they make an mobile version, I can handle it on web, but the process is kinda slow.

I’m afraid I simply don’t have the time nor inclination to port CSIDE to mobile devices right now. However, if someone else wants to take the code and do it themselves (non-commercially), then they have my blessing.

So regarding strings of insane raw data. When importing images through CSIDE. CSIDE uses *gosub_scene to import images.

Storing the data in newly made .txt files within the folder. Now this affects loading time, and increases overall size once game is compiled into HTML.

My question is, why per say if i am using *image example.jpg method and after that upload it to dashingdon per say, most images will NOT show or be loaded.

Is there anything i am missing here, or doing something wrong? Or is it this related to dashingdon or CSIDE?

Are you actually uploading your images alongside the game? The advantage to “image scenes” is that you don’t have to do that.

Are you actually uploading your images alongside the game? The advantage to “image scenes” is that you don’t have to do that.

I am not sure i understand that question. Sorry, but if you’re asking do i keep images within the game folder like this:

I import images through CSIDE via import option, which results in… *gosub_scene csideimg_coffeeshop for example.

That creates txt file within game folder, with insane amount of data. 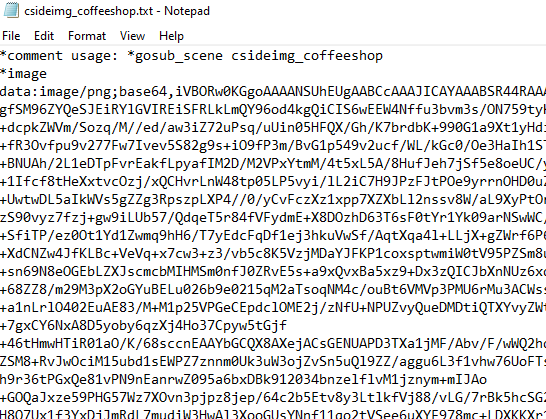 When i first started, i was using *image blabla.jpg

But i’ve noticed when i uploaded the HTML compiled game to dashingdon, some images or all of em were not displayed. Instead, i was shown that…little image icon you know?

When i first started, i was using *image blabla.jpg

But i’ve noticed when i uploaded the HTML compiled game to dashingdon, some images or all of em were not displayed. Instead, i was shown that…little image icon you know?

If you use this method you need to upload in dashington those images too in its seperate section. 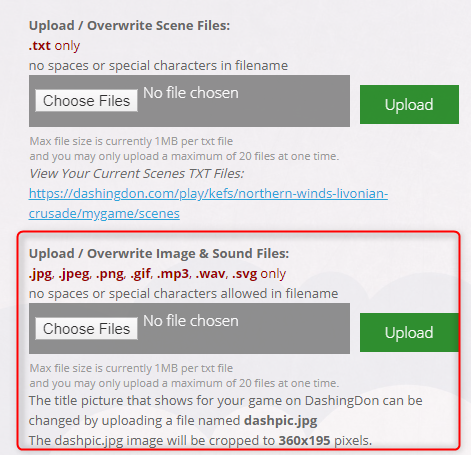 As i’ve said. I compile games to HTML with CSIDE.

And i use THIS. 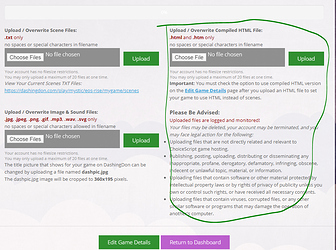 Sorry, I did not know one could do that. For me in dashington there is no such section…

There isn’t. This is something i got by talking to dashingdon about it. But yeah.

I think is a question for the dashingdon thread. If you’re no longer using image scenes, then I don’t think it’s going to have anything to do with CSIDE?