I’m Charli Battersby, you might have played my game “Kidnapped! A Royal Birthday.”

My new game is “Cheerleader’s Choice,” which is inspired by my work as a real cheerleader in New York. In it you play a rookie cheerleader on a civic-minded cheerleading squad. You and your friends will cheer for your community by day. At night you’ll command a renegade pom pom squad to solve mysteries and protect the city.

The plan: I’m working on this full time, and will post weekly updates. Currently it’s about halfway done with six chapters complete.

UPDATE 9/12/22: Chapters 3 and 4 were added to the demo and I’d love to get feedback.
The game is progressing, slower than I’d like, but steadily. It’s officially mostly done at this point.

Welcome to our community!

I’m happy you decided to post this WiP/Dev Diary thread. If there is anything we can help you with, please do not hesitate to contact us (@ moderators )

Let’s all welcome Charli to the forum! So pleased to be editing another game from @TheRoyalHeir

We’ll both be looking forward to hearing feedback on this WIP!

Ooo this is an interesting premise!!!

As a ex-cheerleader myself I’ll be cheering you on the sidelines with this one!!!

Y’know this is totally not the type of game I would ever play. But I enjoyed your other book so I thought I would give it a whirl. I’m not too far in but I absolutely love it! I’ll hopefully give a bit more feedback later, but +1 avid reader.

Several women “speedwalk” by in a cluster, not noticing you at all. They are all too preoccupied with their morning exercise to care about the walk-a-thon.

You are hitting pretty close here to some of my experiences… any closer, and I’ll get triggered

This feels so zippy and zingy already in the prologue… the prose really pops! Thank you for sharing, and I’m looking forward to playing more!

Hmm, this isn’t really my usual type of game, but “based on real experience” stuff can at least be educating, so I guess I’ll check it out. Also, I need to decide if I love you or hate you for

I feel like this could use a “meh, either way” option? 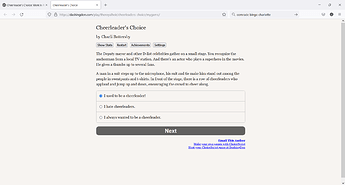 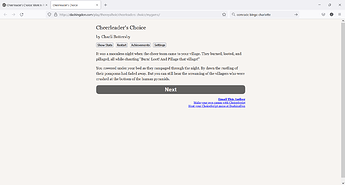 I’m not a native speaker, but I thought the idiom was “marching (to the beat of) my own drum”? 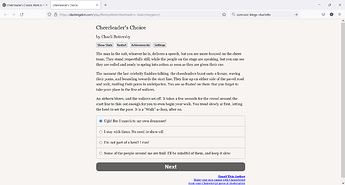 Not sure if that second sentence got cut halfway through or if it’s just missing a period at the end: 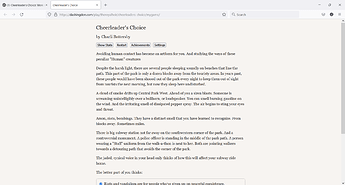 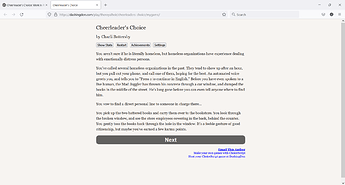 “But everybody has a reality TV SHOW now.” 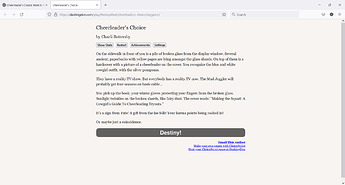 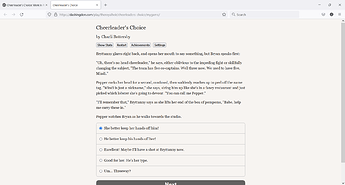 Something missing at the start of the second sentence of the next-to-last paragraph. 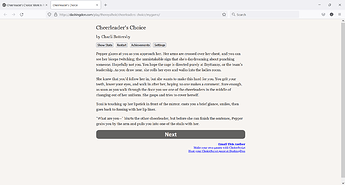 That last option can’t decide if it’s a plural or a singular. 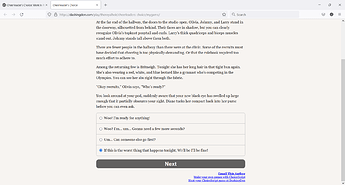 I am BEGGING YOU for a character archive for the NPCs! I suck at names, I’ll never be able to remember who’s who. And you have THREE Britneys (spelling optional)!

my high school team was 5 girls, four were named “Christy” or “Chrissy.”

And did you introduce yourselves as the “Five Cs”?

I see what you did there.

And - I swear this is true - my high school team was 5 girls, four were named “Christy” or “Chrissy.” It was hilarious when they sounded off and yelled out their names.

Have to say thats not my type of game, but, always wanted to try something like cheerlead thing

but as the giant of the class with having beard at the age of twelve, i was not cut to this type of thing

This looks fun! I was a cheerleader in high school, so I’m looking forward to it. My freshman year we only had 4 girls (5, but she quite the DAY BEFORE homecoming!) we had more the next few years, but freshman year was the only truly fun year. After that it became all about winning. I wasn’t even allowed to compete my final year, sense she decided to do tryouts for the first time. Also, I had been on the team the longest, even though I wasn’t one of the seniors.
TLDR, I ranted about high school cheer, but I’m looking forward to the book!

This was a fun read. The name “Brittneigh” has me in stitches laughing, I can only picture a cheerleading horse, which totally works lol. As for Bryttany, well we probably won’t be friends cuz I have both eyes on Bryan

I might not know much about cheerleaders but this choice made me laugh my ass off.

The choice text isn’t particularly representative of the actual outcome, and it’s not very clear what they actually mean. I haven’t paid a lot of attention to the stats, but it was immediately obvious when apparently being aware that round numbers are unrealistic as averages makes me… a rebel who ignores warning signs? What’s the connection there? Just in general the outcome text seems suuuuper extreme compared to any input.

UPDATE 1/17/22: I’m working on Chapter 7. Your character spends some time the oldest member of your cheer team in this chapter. He’s over 50, and I’ve known some real cheerleaders who are still cheering in their 50’s.

I have to admit it, even before I read the WIP you have already won me with the pun. Now I’m finally reading the story, and, well, it’s hella fun! Wish you the best of luck with this project!

I really love your writing style (loved it in the Royal Birthday as well but I dislike fantasy) and I am already hooked on the story! Cheerleading is fascinating, altough I am living in a country where its not common sadly, and the characters are all great!

Author’s Note: I just realized yesterday was exactly TWO YEARS since I quit my cheer team. I still think of myself as a cheerleader, not a “Former cheerleader.”

Those of you who used to cheer, do you think of yourself as a “Former cheerleader?”