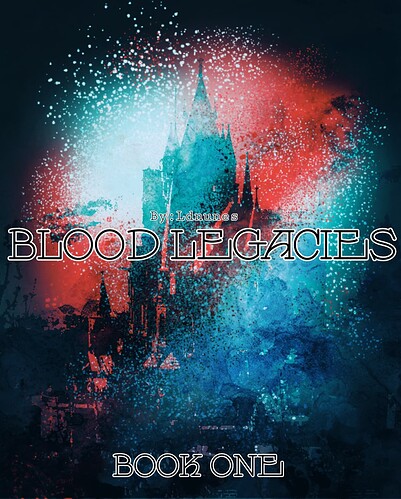 Hi! first i want to say this is my first game and first attempt at a choicescript game, english is not my first language so i apologize if there is any translation error or something. I’ll leave you here with the synopsis and the demo and you can see if you liked it or not, what are your opinions, if there are errors somewhere there, suggestions and etc, thank you.

Synopsis: You are the heirs of one of the most feared houses on the entire continent of El-lar, descended from cruel and powerful leaders and warriors, carrying your family’s bloody legacy on your shoulders.

Your father’s expectations are upon you, demanding perfection or the cruelty that comes from your ancestors. You, an ice elemental, must honor the power you were born with while still in your mother’s womb, and your father’s violent teachings that haunt you wherever you go.

Amidst nobles and commoners, there are threats hidden in seemingly friendly smiles, and next door is an ancient and equally powerful kingdom, filled with mages and ambitious leaders. If it weren’t enough for the countless creatures, people and deadly intrigues that this legacy brings you, a threat arises from the past and threatens the relative peace that exists in the court of your kingdom.

Threatening your life, your home and your people. Who is it? Or what is it? It is not known yet, but what does it have to do with your family, oh that has.

•17+ for violence, killing, toxic and abusive parents, innuendo sexual. Play and read by your own choice.

•Control the ice and use it however you like.

•Customize your character as you wish.

• You can have a fake relationship at the beginning of the game (chapter 2) with two of the ro’s or be their best friends, evolving your relationship however you want, becoming just friends or having a real romance with them.

•Discover the secrets of your ancestors and understand your present.

•fight against other elementals, mages ,creatures or monsters.

• make your father proud by being the kindest or most feared of loved heir. Cecília Marven: The oldest heir of the Marven house, Cecília is a person dedicated to her family and very protective of her younger brother Caio. She is intelligent but also quite brave, to the point of scaring most of the school, both for her protectiveness with her family and friends, as well as being one of the most strategists in the academy, getting some of the best grades. No wonder, since her family is military and had great generals and advisers who came from the Marven house. She spends a lot of time training on the fields and in the training rooms.

“I take care of mine.” Cecilia Marven. Caio Marven: Cecilia’s younger brother, who, unlike his sister, is more passive and not as popular as her. He is calm, and rarely gets a chance to prove his worth to his family, as his father and sister are very protective of him. He really wants to prove himself useful. Although he is also quite intelligent, he is not very good at dueling, preferring to spend his time studying in the library. Elia Samuels: She’s part of the academy’s golden group, a wonder elementary of light, especially when it comes to healing. She volunteers in the infirmary of the academy where her older sister works, helping out whenever possible and spending her time there even if there are no patients and other people there. She is kind but also bold. When it comes to taking care of her patients, she can be extremely insistent on helping.

“I care too much, that could be a problem.” Elia Samuels. Hayden Elkar: Heirs to the throne of the Kingdom of Elkar, a little narcissistic, but no wonder. They are good at duels and very good at controlling their elemental powers, attractive and very popular at school, they have their own fans and great grades. The perfect heirs, or maybe not? One thing to mention about them is that they love to spend their free time in the stables and also alone somewhere quiet.

“I must be an example.” Hayden Elkar. Tyler Krevan: Bastard son of Don Krevan, Tyler is a true sleeper, but curiously continues to get great grades. He enjoys parties but also his precious time in the art rooms. He knows how to use a sword but his specialty is Elemental manipulation. He is excellent at manipulating the air and knows how to use it like no other student.

" I have nothing to lose." Tyler Krevan.

Plot seems interesting, although not sure if this would apply but you might want it put up some warning, like (what looks to be) an abusive father, violence and the likes, there were also some grammar mistakes here and there but overall it seems interesting

Can’t find the link to test the demo, but seems interesting!
Is Hayden gender selectable?

sorry for this error, I was editing the post and ended up deleting it by accident, this has already been fixed and you can test the demo. Hayden is non-binary gender.

What is going to be? loved, hated or feared? It’s up to you to choose, it’s up to you to leave a legacy, be it good or bad. But one thing is for sure, the legacy on your shoulders is full of blood, and at some point it will overflow.

I really like the the story so far. I’m excited to see where it goes and meet all the characters. I really want to play the character as an ice queen, both in powers and personality if possible. I know you mentioned English isn’t your first language and I fully appreciate the effort you’ve put into your demo and I really hope you don’t think I’m being rude but it could use a lot of editing, especially with verb tenses.

This is a very interesting start, and I’d like to see where it goes.

I do have a couple of minor complaints: Firstly, you often switch between past and present tense, which can make it harder to understand what’s going on. Secondly, while I do like the RO pictures, they’re pretty large; would it make sense to have a separate “Characters” page in the stats like you do for monsters, and put the images (and some character descriptions) there?

Oi @L.D.nunes saves for this are overlapping with some other game…

Oh, that happens if you have mygame in the save code; you should change it to something like:

Glad you liked it, and thanks also for the advice, I’ll take a look and revise the chapter to check for some errors and correct the verbs issue.

I’m glad you’re enjoying it, and I’ll check out the chapter about it and fix this matter of time. About the characters page, it’s already done, thanks for the suggestion and comment😁

It’s been fixed, thanks for the warning, I didn’t realize that.

Seems great so far but you use they instead of their towards the end of the demo. You also said cecillia I found he at around the same point

I believe I’ve fixed it already, but I’ll give it a read later to be sure.

interesting story, I noticed you used the wrong words for them, their, her and she, for example.

Like here where it states “Cecilia! I Found She!” this should actually say “Cecilia! I found her!”

Same with this line ““Well, it seems your charm works even on Wendigos, dear. And here I am imagining that they gave up after having tasted a little of that cold blood.” Them voice was calm” It should be their not them.

Their were a few other instances of this in the story.

I hadn’t noticed that. I will work it out. Thanks for letting me know.

Oi there @L.D.nunes I like this despite the many many mistakes. Mistakes that are like @Aethelric pointed above and many many more.

Not to sound like an ass but you definitely need a proof reader and you need one as soon as possible.

I like the premise so far, it seems promising! Ice as an element has a lot of potential so I’d love to see various uses for it as challenges come up in the game.

I would suggest adding more responses in the scenes with the father. Maybe you can promise to him that you’ll train harder, stay silent instead of responding to him, or lash out because you’re in pain. Same goes for the scene where he gives you the knife–that must be one hell of a situation for a 12-year-old.

Thanks for letting me know, it’s these types of errors that often go unnoticed. I use a translator too, to translate a few lines of texts more easily and faster, but often the translator adds or changes a word, such as “he” or “his” in place of “your” and a few others. Which complicates, but thank you for showing the errors there. And chapter 1 will soon be updated with more options in the beginning scenes and others.