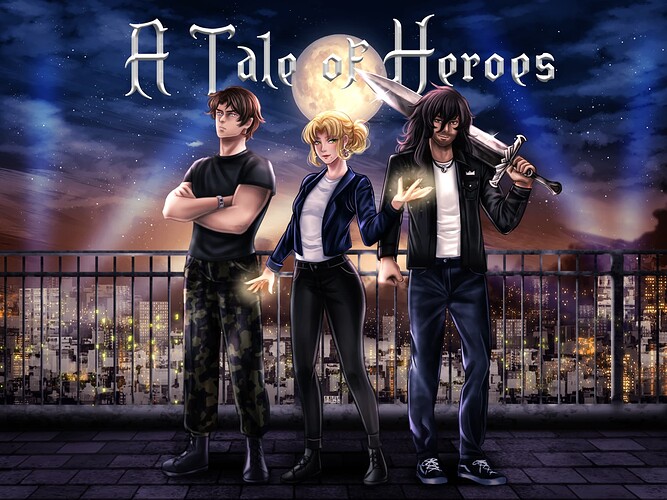 In a world where superpowers were never a fantasy, and have been a staple of humanity from its very beginnings, you are a college student in Giga College, from the similarly named Giga City. Your days consist of stuffy professors and their long, boring lectures.

Or they did, at least, until you awaken latent superpowers, and your entire life gets turned on its head.

Taken under the wing of the world-renowned League of Heroes, you’re now a rookie in training that will soon spend their days protecting the citizens of your city from attacks by criminals, villains, and even natural disasters.

Juggle the expectations of your new allies and the increasingly strained political climate of the country as President Stratton tries his best to wipe your team’s goodwill off the map, all while figuring how far your newly-found abilities can, and will have to, take you.

But something more lurks in the underbelly of Giga City. Your appearance has set many plans into motion, just as it has shattered many others. And it won’t be long until centuries of resentment and forgotten grudges rear their head on the citizens that the League has sworn to protect.

This is Giga City. This is your city.

Don’t let it go down in flames.

Hello, everyone! My name’s Juan, and I’ve been working on a story for one of my ideas in the past few months.

Currently, the demo consists of the prologue and the first 4 chapters, coming out to over 147k words. Updates will be coming regularly-ish, as I take time to write whenever I have a moment from school and work.

This is my first attempt at writing a CYOA story, so any and all feedback would be greatly appreciated.

Regarding feedback, I’m looking for two tiers of things:

Low-level feedback: Grammar and structure. Is a sentence weird? Found a typo, or misspelled word? A paragraph that doesn’t fit in the scene? Please, let me know! I’m not a native English speaker, so I’m bound to make mistakes, and my knowledge of Choicescript isn’t the best either, so I could have mixed up labels or the like.

High-level feedback: Narrative and balance issues. What do you think of the characters? Is there something you expected the story to address, but didn’t? When offered the chance to give your opinion, did none of the options represent what you thought? Were the romances moving too fast?

If there’s anything I haven’t mentioned here, please don’t be afraid to bring it up. I love talking, and questions from you all is how I continue to give shape to this silly world of mine.

Also, if you have any questions or comments, here’s my Tumblr page: http://juantheashura.tumblr.com

I also have a Ko-Fi, in case you can and want to support my writing: https://ko-fi.com/juancuevas0168

Discord Server: A Tale of Heroes

Well, I really enjoyed that. Found some not so good things tho.

very interesting plot! the characters were great, too. Would Romance be added to the story? (I’m a sucker for romance lol) there was a lot of text walls, maybe break it up a bit? …not a lot of choices, slightly railroaded in my opinion.

Love it can’t wait for the next update​:fire:

Found some not so good things tho.

Heya, are you referring to the screenshots, or something about the plot? If it’s the former, I think I just got them. I updated the game, so they shouldn’t show up anymore.

Would Romance be added to the story?

Yes, Nova, Aki and Latooni will all be romanceable characters. The option to begin pursuing them will appear when the MC’s training has advanced a bit more.

there was a lot of text walls, maybe break it up a bit? …not a lot of choices

Any examples of where you saw the text walls? Breaking them up should be rather simple, and as for choices, what would you like to see? The MC isn’t having too much free reign yet, but that should change around Chapter 2.

Also, thank you all for your nice comments! I really appreciate them.

This was really good!

This was really fun and I can’t wait for more. I mean, superpowers? The chance to be the most chaotic, OP jerk out there? Sign me right up!

I think this is really interesting!

some pronoun inconsistencies I noticed tho~ my MC is female

I noticed one mistake? I think? In Forlorn’s description you wrote “as his list of historic feats grows larger and larger” I think you meant to write heroic instead but I’m not sure.

Loved the story so far and the characters, I’ll try to read it again to give a better feed back later.

I’d suggest adding options for naming, for lazy readers or people who don’t really mind what name their MC has.

It seems quite interesting!

Damn devils, no save option (yet?)?

All pronoun errors should be fixed now! Apologies for those, though I guess that’s what writing at 2 AM gets me.

If you find any more, please bring them up.

Once again, thanks everyone for the compliments!

edit: the last name options are there though

Oh, I also forgot to mention, Nova’s profile is also up now! 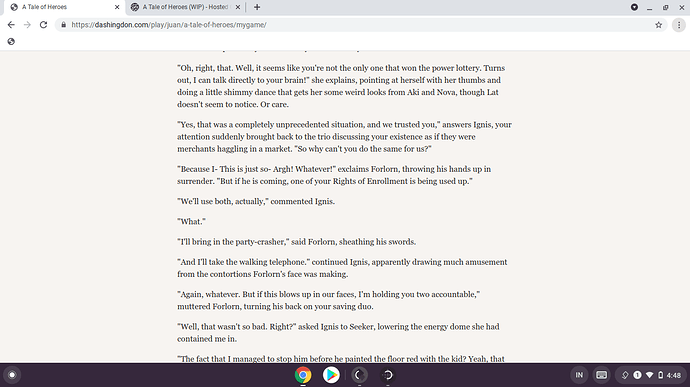 It says Forlorn sheathing his swords when it should be Seeker.